Constructor newsflash! Caleb Madison’s been making minis for The Atlantic, and now they’re expanding to include a weekend 15×15 crossword online. If you’re interested in submitting your work, send Caleb your theme query (not a completed puzzle, just the theme pitch) at cmadison@theatlantic.com. He promises to respond within a month with either a “yes” or constructive notes. They’re looking for medium-difficulty themes and clean fill, and The Atlantic will pay $350 per puzzle.

Hello all! Nate here, filling in for Amy to cover the Sunday NYT puzzle, which is a NYT debut for Ben Zimmer. Congratulations! Here’s to many more. Okay, let’s dive into the puzzle and its theme: 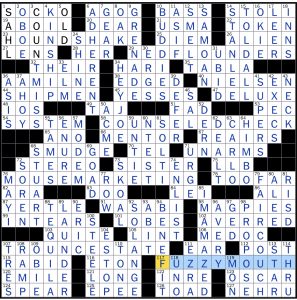 When I was a kid, my dad was in the military. That means we lived all over the world, including the panhandle of Florida. That means that my vowel sounds are all over the place. My husband lovingly makes fun of me because I say room temperature as rum temperature, I pronounce the words pin and pen identically, etc. That means I usually don’t enjoy puzzles like today’s, which rely so much on how you pronounce and hear words. And yet, I really enjoyed this one and it worked for me! To my ear at least, the “Shifting Sounds” (a play on shifting sands, I just realized, and with the same vowel shift as the themers!) in today’s puzzle cause a ‘short a’ sound to shift into an ‘ow’ sound. Linguists and folks more in the know, help me out: what are the specific sounds being morphed in the themers and title?

In addition to quite enjoying this puzzle’s theme, it was a quick solve for me (a full 3:30 faster than my average NYT Sunday) and full of a lot of enjoyable non-theme fill (and very little garbage)!
– I love seeing modern celebrities of note like comedian HARI Kondabolu! Per his Wikipedia page, “Kondabolu is the star, creator, and executive director of The Problem with Apu, a documentary about Apu from The Simpsons … The film contextualizes Apu within minstrelsy and other tropes in American pop culture history that have historically stereotyped minorities.”
– I was glad to see the clue for AŇO reference its tilde, lest the answer actually be anus.
– I will never not be excited to see Mahershala ALI, [Academy Award winner for “Moonlight” and “Green Book”] in a puzzle or movie.
– Other favorites: Dr. Seuss’s YERTLE and [Attractive but vacuous guy, in slang] HIMBO.

And, because they’re otherwise underrepresented in puzzles, I love seeing women featured in crosswords. Today’s puzzle included Zora Neale Hurston, Patti Smith, Laura DERN of “Marriage Story,” Mary STUART, and the amazing SOLANGE Knowles (who definitely deserves a seat at this crossword table, even if her sister Beyoncé sadly doesn’t do crosswords). Way fewer women in the grid than men, as is typical for puzzles these days, but it’s worth celebrating the women who were featured and encouraging the inclusion of more women in puzzles, if even via the cluing.

The trickiest bit for me was the NW corner. I’d never heard of SOCKO as [Smashing] and barely knew [Comedian Mort] SAHL from “The Marvelous Mrs. Maisel” – I can see a few solvers with a Natick at that first square (and maybe at AVERY/MEDOC), but otherwise a smooth and lovely puzzle. Congrats, Ben & Brendan!

Meta time! A music meta at that!

THEME: Something to do with songs and the bands that play them… 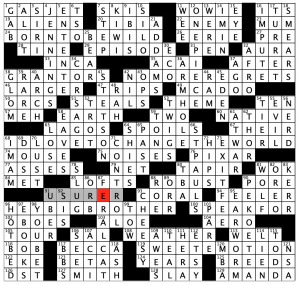 Not a heckuva lot of theme answers, right? Or so it seems. One look at the title, and the solver is tipped off that knowing the songs’ artists is probably key. And it is. I had to look up 3 of the 5, but as soon as Aerosmith came to mind I noticed that I had recently filled in both AERO [Nestlé candy bar] and SMITH [Maggie of “Downton Abbey”]. Wait a second… STEP PEN and WOLF are also entries. And so are ARCH and ENEMY. TEN YEARS AFTER and RARE EARTH all make appearances too! Can’t be coincidental.

The next step is a meta solver’s “go to” step: always look at the first letters of notable entries.

Or Separate Ways by Journey!

What a cool meta. Extremely tight using all very well known songs and a final answer that suggests “disbanding.” The symmetry of the answers and the north-to-south placement of the band names is just superb. And the fill didn’t suffer in the least, although I got stuck on the USURER/UBER section because I refused to change the CBER that I initially entered (hey, it totally works as an answer to the clue! [Company on the road] for truckers is often a fellow CBER, right?].

And of course, this:

THEME: Common phrases with DD in them are changed to TT and clued wackily. 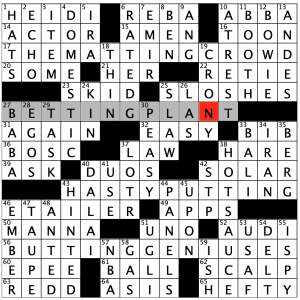 One thing I can almost count on in a Universal is that one clue will offer a trivia tidbit I didn’t know. This time it was at 1 Across: [Swiss girl played by Shirley Temple] HEIDI. I had no clue HEIDI was portrayed by Shirley Temple. I’m sure I’m the last to the party on that one.

Anyway, the theme for this is fine. It took me a while to see because I was unfamiliar with many of the base phrases. BU[DD]ING GENIUSES was the only one I has 100% confident in, and HASTY PU[DD]ING rang a vague bell, but I didn’t know what a BE[DD]ING PLANT was and I still don’t know what THE MA[DD]ING CROWD is (googles)… looks like it refers to the rat race of humankind. Also, looks like a Netflix series is coming out that shares the phrase in part of its title.

So, just fine. My own ignorance probably kept me from enjoying a solid click mid-solve. I was left to figure it out post-solve.

I got moving this morning to the tune of three miles around the neighborhood, socially distancing from the other walkers and wearing my mask. All of the theme clues are one word that is a kind of movement; the answers are alternate definitions. The theme clues are all caps because otherwise they’re just – clues. 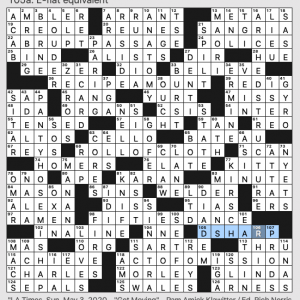 I prefer my themes with a least a little wordplay. This one does not move me.

What I didn’t know before I did this puzzle: I got nothing, which means there was precious little pop culture in this puzzle. I know some of you think that’s a good thing. I think it contributes to the mustiness. This puzzle could be nearly 30 years old; NALA and MISSY Elliot made their debuts in the 1990s.

If ever there was a puzzle made for me, this was it. After all, once upon a time I double-majored in computer engineering and English, so a puzzle with computing puns is right up my alley. 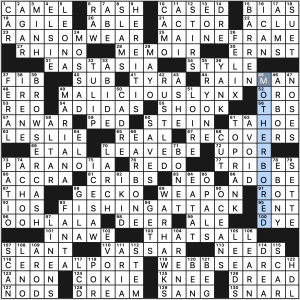 Fun theme, at least for me. Every base phrase is in-the-language enough (or nearly so) to be recognizable by most people, I should think. And everything flowed so smoothly, I clocked in at one of my fastest times ever for a 21x.

And it wouldn’t be a Burnikel grid without plenty of nice fill: “HERE IT IS!,” EAST ASIA, RAIN MAN, TOP RANK, PARANOIA, LEAVE BE, WARHAWKS, MOSSAD, “TRY ONE!,” “THAT’S ALL,” the preferred with-an-H OOH-LA-LA, and the MARIANA Trench (my home trench, off the coast of Guam, my home island). 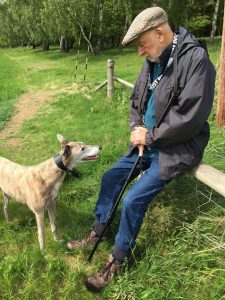 My neighbor Roy and Bill the greyhound

When I have a fast solving time, that probably means cluing was pretty straightforward. But that doesn’t mean some aren’t notable:

Smooth and fun puzzle. Four stars from me.