Matt here, filling in for Jenni, who is rock-climbing in Patagonia (I’m guessing). Today we have an amusing theme from Emily Carroll: 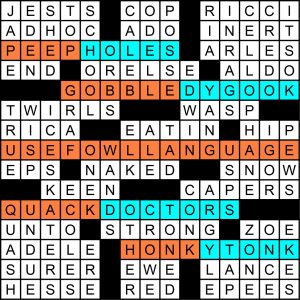 17-A: [Features of most hotel doors] = PEEPHOLES. I think “hotel room doors” would be more precise.

37-A: [What the starts of the answers to 17-, 24-, 48- and 60-Across do, punnily?] = USE FOWL LANGUAGE. Non-traditional central revealer! I think this is becoming a thing. When I saw one of these a few months ago I recoiled at the affront to my revealers-come-last-end-of-discussion upbringing, but then a commenter said that they liked the central reveal because it let them enjoy the last few theme entries during the solve instead of after. Interesting take. Since seeing that comment I’ve thought about using a central reveal in a couple of my puzzles but haven’t quite been able to bring myself to do so. But when I saw it here I have to admit it didn’t bother me. May have been forced in this case since there might not be a good 15-letter match for USE FOWL LANGUAGE, but again, warming up to the idea. Sound off yea/nay/OK in comments below.

So we’ve got a chick, turkey, duck, and a goose making a peep, gobble, quack, and honk. Nice touch that they’re all different animals; wouldn’t have begrudged her having to reuse one of these creatures in a theme entry but it elevates the theme that she didn’t.

Star fill: ICE SKATERS, CELLOPHANE, ARGYLE, and STRONG. Only non-Monday zone was the upper-right, where the confluence of RICCI, ARLES, ALDO, RIA, and CREDO might trip up a few newbs. You and I knew all those, but hey, we’re pros.

Clever clues: [Knight stick?] for LANCE, [Film about food?] for CELLOPHANE, and [Just about every character on “Brooklyn Nine-Nine”] for COP.

Let’s come up with a number: fun theme I haven’t seen before, tightly executed; controversial/bold placement of the revealer in the center; fill that didn’t suffer despite five theme entries, including a 15. Running that through the ratingometer yields a score of 3.81740328 stars, which rounds up to 3.82 stars. Above-average Monday.

This puzzle uses the first letters of its theme answers to spell out the famous movie quote. STAR and WARS make an appearance at 29d and 56d with the clue [With 56-Down, series that’s the source of the movie line in the circles]. 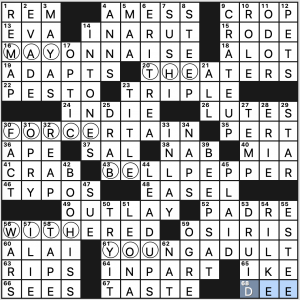 Pretty simple and straightforward. A good accessible Monday theme for crossword newbies, especially those of the geeky persuasion. The only trouble for me was that I tried to shoehorn FOURTH where FORCE eventually went.

Billy DEE Williams makes an appearance at 68a, and TITLE gets the clue [Darth for Vader, e.g.]. The most surprising bit of the theme for me (in a fun way) is the puzzle’s title, since the quote is spoken often by Jedi Knights.

The rest of the grid wasn’t all that memorable as I sped through it. Entries like CRATE UP, BEEPS AT, LEAD-UPS, and INTONES don’t exactly sparkle. I like “BOO HISS,” and ERITREA is nice to see thanks to its crossword-friendly letters.

I was surprised to find INLAY and OUTLAY in the same grid and crossing at the Y, no less. In fact, that Y was my last letter entered. Their meanings are completely unrelated of course ([Dental filling] vs. [Expenditure]), but it was still surprising since they must be etymologically related. Mustn’t they?

Not much to note in the cluing, so I’ll leave it there. 3.4 stars from me. 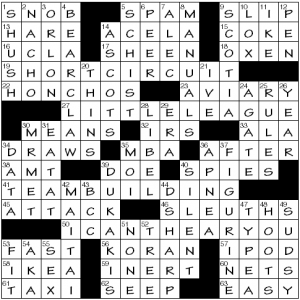 So there you have it. Straightforward, Monday-ready theme.

I’m not a big Miles Davis fan, but it certainly seems appropriate.

Let’s have a look around (40a [Intel collectors] SPIES). 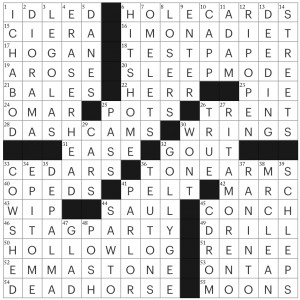 WOW this grid! Patrick Berry has given us four absolutely flawless, wide-open corners with dense quad-stacks of 9s in the NE and SW and only one single solitary piece of fill that I could live without (it’s WIP). Also only two three-letter entries in the entire puzzle, unless I’m missing something. Just a gorgeous, moderately challenging themeless grid packed with high-quality wordplay clues and some standard New Yorker cultural trivia sprinkled throughout.

First, those quad-stacks: HOLE CARDS / I’M ON A DIET / TEST PAPER / SLEEP MODE in the NE and STAG PARTY / HOLLOW LOG / EMMA STONE / DEAD HORSE in the SW. Every one a solid entry, except mayyyybe TEST PAPER, but the clue on that one so nails the entry that it doesn’t matter. The other long entries in this puzzle are ERASERHEAD, the Wikipedia article for which I sincerely regret reading, and RITA MORENO, whose appearance on The Muppet Show I sincerely do NOT regret finding on Youtube and linking here.

Overall, this is a tightly packed, expertly constructed puzzles that I thoroughly enjoyed. Many many stars from me! 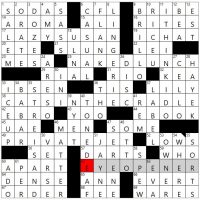 17A: LAZY SUSAN [Revolving tray]
25A: NAKED LUNCH [1991 cult film based on a William S. Burroughs novel]
38A: CATS IN THE CRADLE [1974 Harry Chapin hit that mentions Little Boy Blue]
49A: PRIVATE JET [Rich exec’s transport]
62A: EYE OPENER [Shock to the system, and what the start of each answer to a starred clue can be]

Lazy eye, naked eye, cats eye, and private eye – each theme entry opens with an “eye -” phrase. I’m not the biggest fan of lazy eye or TONE DEAF in this puzzle – both certain skew negatively and maybe even in an ableist direction – but the theme set otherwise felt solid. I appreciated that two of the themers had to do with the actual physical organ of the eye and the other two didn’t.

What I extra appreciated was all of the women featured in this puzzle! Comedian ALI Wong, Chris EVERT of Tennis, Minnesota senator AMY Klobuchar, BEA Arthur of “The Golden Girls”, “Frida” star Salma HAYEK, Barbra STREISAND of “Yentl”, Old-time actresses JAYNE Mansfield and Meadows, and EVA Longoria of “Overboard”. A small missed opportunity with ANN and its cluing, but I’ll take it. :)