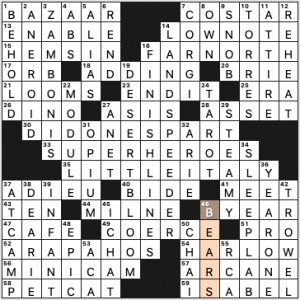 So today I chanced upon a YouTube playlist of soft rock songs from the ’70s through the ’90s. It makes for a great soundtrack while working if you were a ’70s kid who liked those songs! Anyway, I found out the hard way that it doesn’t help one’s themeless solving speed to solve while singing along to Billy Joel and James Taylor. V. distracting, in fact.

I like the pretty pinwheel grid, with the stagger-stacked 11s filling the middle. Fave fill: the FAR NORTH (Minnesota, Canada, Scandinavia, etc. are Northern Lights territory), DID ONE’S PART (stay home if you can!), SUPERHEROES with a tricky clue ([DC figures], DC Comics rather than Washington pols or jocks), LITTLE ITALY, Jean HARLOW, ZAMBONIS, gorgeous DESERT BLOOM (loved the photos when the Mojave burst into flower a couple years back), race FINISH LINES (not sure when my husband will next have an actual in-person race to run…), and SLEEP LAB.

I flew through most of this puzzle, probably because I myself am EXTREMELY ONLINE and could keep up with most of the cultural references. I did slow down a bit in the SE, where I could not call up ATONEMENT for some reason (even once I had all the letters, my brain kept parsing it as “AT… ONE.. MENT..???”). 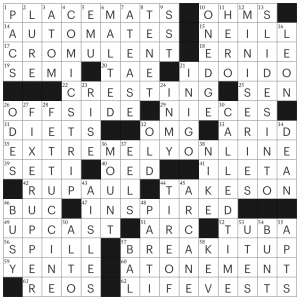 I enjoyed the stacks of 9s in the NW (PLACEMATS / AUTOMATES / CROMULENT) and SE (BREAK IT UP / ATONEMENT / LIFE VESTS), as well as the long downs of MINI-SERIES / SLIDES INTO and  FIXER-UPPER / FETTUCCINE. All good, crunchy long stuff that gives this puzzle a voice, amplified by excellent clues (I particularly enjoyed “Builds a robot for” as the clue for AUTOMATES).

I did slow down a bit with the cross-referencing of AT EASE/ON EDGE and HERO/MINI-SERIES all being in such close proximity. On the one hand, their nearness made it easier to find the cross-referenced clue, but on the other hand made knowing the crosses even more important, since you won’t be able to get the one reference without (most of) the other. I have a love/hate relationship with cross-referenced clues because they’re usually quite clever (AT EASE/ON EDGE are great), but sometimes are just a tad superfluous (HERO/MINI-SERIES). Now, if the full name of the MINI-SERIES had been HERO, it would feel less superfluous, but since it wasn’t a one-to-one… Idk, it feels like just because you *can* write a cross-referenced clue doesn’t always mean you *should*.

Overall, this puzzle felt fresh and EXTREMELY ONLINE and I enjoyed it a lot! Tons of stars from me. Happy weekend all— go put the bass in your walk! 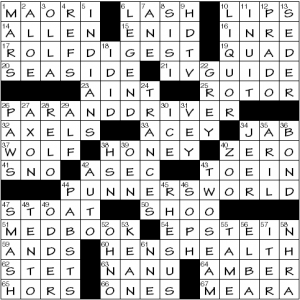 Change the first letter of a magazine title, make a professional pun.

The new first letters don’t spell anything, nor do the replaced letters. But this isn’t a meta puzzle, and there are SEVEN of them in this 15×15 grid, so that isn’t a valid complaint.

I’d’ve preferred not to have a single non-theme invocation of another magazine – 56d [People Magazine’s 2018 Sexiest Man Alive] ELBA. Completely unnecessary to clue it that way. Either have no theme-adjacent stuff or go all the way and seed the whole grid and clues with references. One or two ‘bonuses’—especially avoidable ones—end up seeming inelegant.

Theme: Phrases whose first word is a shade of red starting with C. 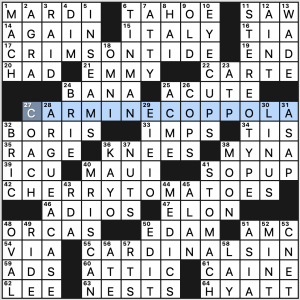 The set isn’t totally consistent in that some of the C-words change meaning (like “cardinal”) and some don’t (like “crimson”), but you’d be hard pressed to find a totally consistent set of four similar phrases that all behaved in exactly the same way. These work well enough in my mind to make for a solid puzzle theme. Nothing too deep or fancy, mind you, but enough of a gimmick to make you think, “Huh. I didn’t realize there were that many shades of red starting with C.” And the title is a nice pun on the phrase “see red.”

I didn’t know CARMINE COPPOLA, nor did I know that carmine is a shade of red, so that was a tough one for me. It turns out that the senior Coppola was a composer, not an actor, and won Best Original Score for The Godfather Part II.

The long fill entries aren’t exactly fun, but they are solid: STEREOTYPE, ARGUE A CASE, EYECUPS, INSEAMS, MRI SCAN, and STOMACH. On the short side, ATTY [Court fig.] is less commonly seen than ATT as an abbreviation for “attorney” (in crosswords, anyway), but it’s still common enough. And I just learned it’s also short for “atomizer,” the part of an e-cigarette that produces the vapor. Don’t be surprised if you see that clue before long.

Anyone who thinks that quality is compromised when editors seek out crosswords by women and female-identifying constructors has clearly not been doing the Inkubator puzzles. They are consistently some of the best around. This one is way up there on the list of my favorite puzzles ever. When I saw the title, I thought “isn’t it usually ‘distance learning?'” I should have known there was a good reason it wasn’t. I loved this puzzle.

The first theme answer I ran into in the NW corner left me scratching my head. Eventually I worked my way over to the next answer in that row and the light dawned. I may have laughed out loud; I certainly chortled to myself. 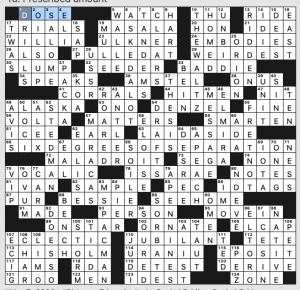 Five theme answers doesn’t seem like much for an oversized puzzle until you realize there are actually ten and it’s a real construction challenge that is very well executed.

That’s it for me – I want to get this posted while there’s still daylight! ETA: I was in such a rush that I forgot to add the grid. Fixed.