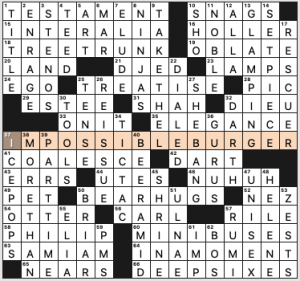 May I grouse for a moment about the NYT crossword’s parochial insistence on pretending the rest of the puzzleverse barely exists? Tonight’s Wordplay post says, right in the headline, “Miriam Estrin makes her crossword debut.” She actually debuted in February, with a Universal crossword co-constructed by Andy Kravis. Congrats on your NYT debut, Miriam! And congrats on choosing such terrific partners—Erik and Andy are two of the kindest and most talented crossword professionals out there.

Anyway—this puzzle is one square wider than usual, to accommodate the central IMPOSSIBLE BURGER. If you’re going to include a patty of some sort in your grid, where better to place it that right in the middle, between the buns and such?

Other fill I’m partial to: BEAR HUGS (and right near an OTTER!), DEEP-SIXES, TAKE THE L, SHEBANG, GLAMPING, and SET PIECE.

Lots of clues really shone, too:

Did not know: 31a. [Bollywood’s ___ Rukh Khan], SHAH. Nice to see an alternative to the pre-Revolution Iranian emperor (and Persia still gets its shout-out with poet RUMI). Also did not know 40d. [Portmanteau for an arrangement of cans in a dorm room, maybe], BEERAMID. Google tells me there’s also a drinking game by that name involving a pyramid of playing cards? I lost interest in learning more.

I love 12d. [Mozart’s “Rondo ___ Turca”], ALLA—and I will confess to you that I first heard it on a Baby Einstein video, so in my mind’s eye, I see little plastic penguins on a roller coaster throughout the piece.

Not wild about bits like NEZ BOS ELIA, but they’re legit fill. 4.2 stars from me. 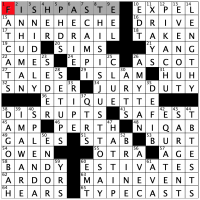 I have linked to Chris’s website before, so you should know who this is by now. If not, rest assured that this is one of the rising stars in puzzle construction. He mentions on his blog that he does a livestream of solving while drinking, which I have not seen yet, but sounds hilarious. I will have to turn on Twitch notifications for him! This puzzle was a little thornier for me that usual Saturday LAT puzzles, but still not Stumper level. Maybe it was the tequila that slowed me down? 4.6 stars for this one.

That is all for now! Maybe I will see you on Chris’s next Twitch stream! 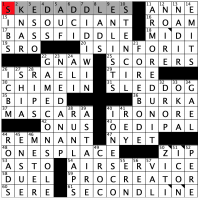 Stella’s puzzles are super hard anyway, so it is only natural that she construct Stumpers! The puzzles on her site are super tough, so if you like the sort of head-banging challenge that these Stumpers provide, you will be in hog heaven with her puzzles! I think this is the second Stumper she has made in her construction renaissance, but here’s hoping for many more as we move forward. Got this one done in a little over ten minutes, which is a great Stumper time for me, but I have done a lot of her puzzles, so I think I get her clue “vibe” fairly well. As long as Stan doesn’t change too much during the edit process! Started this unique grid at about 9:00, then worked in a counter-clockwise manner until finishing in the NW corner. There are a lot of great clues in here, too many to mention below, but this Stumper was a joy to solve. A robust 4.7 stars from me. 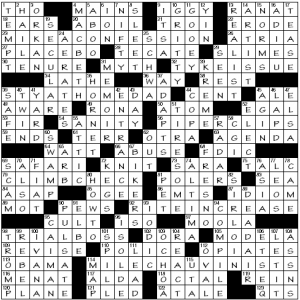 They probably would sigh, or groan, at the accent-based puns here. To my Unitedstatesian ears these sound like reasonable if slightly exaggerated representations of the lingo.

Does what a crossword is supposed to do. Entertain, provide a bit of a challenge.