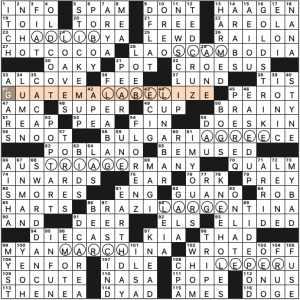 Neat geographical theme: Take two bordering countries and list them one after the other, highlighting the familiar vocab that can serve as a bridge over the border. The clues are for the bridges, with an added hint telling us the continent or region.

I didn’t realize till halfway through the puzzle that the country pairs share a land border. That definitely elevates the theme, since it’s not just “take two random countries whose names can be connected by a word.”

Dupes that jumped out at me while solving: HOT COCOA and CACAO (the word cocoa is taken right from cacao) and D.C. AREA echoed needlessly by D.C. in the clue for 31a POT. That said, one can never have too much chocolate, so …

Weirdly ungendered clue for 67d. UNMAN, [Dishearten]. Merriam-Webster gives two definitions: “to deprive of manly vigor, fortitude, or spirit” and “castrate.” So dishearten doesn’t really capture it. Can’t we have a little castration in the clues?

Great clue: 15d. [Group seen in gathering clouds?], AEIOU. If you think it’s neat that there are words and phrases that contain each vowel exactly once, check out the Facebook group called Supervocalics. Gathering clouds is particularly nice since the vowels appear in alpha order.

Not wild about these assorted two-word 6s: RAIL ON, YEN FOR, THE NEA, ON LATE. Also the shorter glue like OENO, ELOI, AGARS.

I thought I figured out the theme early one. I only saw part of it.

Each theme answer has a X replaced by another letter.

And the revealer: 120a [Pupil with a phonetic beginning that hints at what the circled letters comprise] is XCHANGE STUDENT. The letters that replace X in each theme answer read STUDENT as you go down the grid. It’s a good theme, well-executed. I could have done without the circles showing me which letters were replaced, and I would have preferred EXCHANGE to XCHANGE, but those are minor quibbles. This is a feat of construction that was also fun to solve.

What I didn’t know before I did this puzzle: that NEDDA is Silvio’s lover in “Pagliacci.”

Hands up for really, really wanting LITTLE BO PEEP instead of LITTLE BOY BLUE at 54-Across!

THEME: Hairstyles are “split” in theme answers by one letter. Those letters, in Birnholzian style, spell out a revealer of sorts. 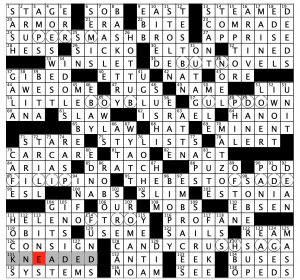 Not what I was expecting on Mother’s Day, especially after last year’s Mother’s Day meta which is still very fresh in my memory (Morticia Addams!). But a fun one nonetheless. There are some really nice finds in the theme answers, which, given the tightness of the theme, must’ve been tricky to compile. I mean, THE BEST OF SADE is almost laughably not on the forefront of my mind as a thing, but it’s so out there that I found it strangely enjoyable to uncover.

I found the fill tougher than usual, though completely fair. I floundered quite a bit in the NE. Didn’t know EMPTOR at all. And looking back at it now, I don’t know why I struggled so much with that section. Maybe the clues just seemed somewhat vague at the time in that area and it was difficult for me to enter anything I was 100% confident with. I dunno.

Very much enjoyed the clue for 3-Down [Boomers at a concert?]. AMPS. And let’s just go ahead and assume it was a Grateful Dead concert while we’re at it.

Really enjoyed most of the ? clues, though there’s one I don’t quite get: [Door handle, at times?] = NAME. Little help? I mean, I know that a handle is a NAME, but I don’t get the Door part.

And of course, the video game clue of the day = SUPER SMASH BROS.

I’m just realizing as I typed in the title that I haven’t tried to figure out what the theme is yet! Doing that now… 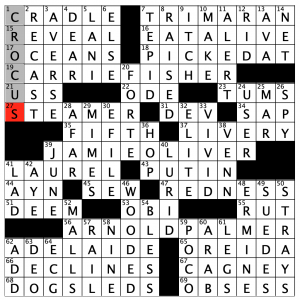 THEME: Just looked at it for five minutes. I don’t know.

THEME ANSWERS: (I assume?) **figured it out… see write-up

Let’s avoid discussion about whether or not mixing iced tea and lemonade should be referred to as a “cocktail” for the moment (that’s the only way I know how to make an ARNOLD PALMER anyway…) and look for a theme. What do these three have in common? What can the title mean??

Yeesh, that almost felt like a meta. Okay, so they are all OILers (ignoring the fact that the E of the ER in OLIVER breaks consistency). Anyone else have the same difficulty sussing it out as I did? It very well could just be me. Also, when I think Oil, PALM isn’t on the forefront of my mind, and FISH isn’t that much further ahead.

I found the fill much more difficult than usual today too, so I’m gonna go ahead and just say mulligan. My fault! I wasn’t on the wavelength today.

Sorry for the late post, everyone. It completely slipped my mind with Mother’s Day goings-on.

Anyhoo, the theme is sports teams who share a name, as revealed by DOUBLE TEAMS [Gangs up on, in basketball … or a hint to the starred answers’ ends]. 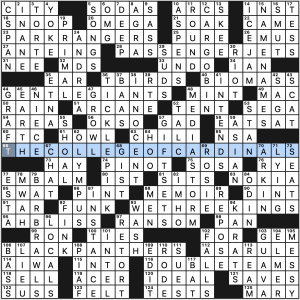 I didn’t realize there were so many shared team names, which I found interesting. Impressive how ZB rounded them all up and found symmetrical phrases for all of them.

Nothing much to scowl at either, so I will leave it there. I hope everyone who celebrated, had a nice Mother’s Day. See you tomorrow.