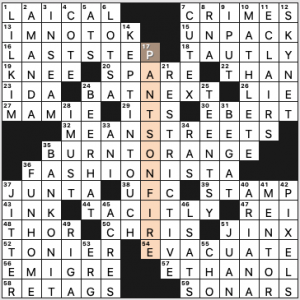 If you enjoyed this puzzle, check out the constructor’s other work at his arctanxwords site.

We’ve got another pinwheely grid with stagger-stacked 11s in the middle, a 66-worder. Highlighgs include cinema’s MEAN STREETS, FASHIONISTA, JINX (“You owe me a Coke!”), LIL KIM, Alison Bechdel’s FUN HOME, “BANK ON IT,” KEPT IN TOUCH, Politifact’s PANTS ON FIRE Truth-O-Meter rating (here’s a current one, McConnell falsely claiming the Obama administration left no pandemic game plan, hmph), and MATHLETE (I’m sure Christopher, like me, was in Mathletes, but the clue, [One who’s used to adding pressure?], suggests it’s an arithmetic competition, but I don’t recall there being any addition events at the high school level). I also like the THOR/CHRIS Hemsworth combo. And ECLAIRS! And SKYNET, which I was immersed in at some theme park Terminator attraction.

Not so keen on “I’M NOT OK” as a crossword entry, singular JITTER clued as [Nervous feeling] (that would be jitters, though JITTER is a legit word with a different angle), and partial I PUT (partial I MUST is less bothersome). Is plural SONARS legit? Probably it is, but it feels funny. 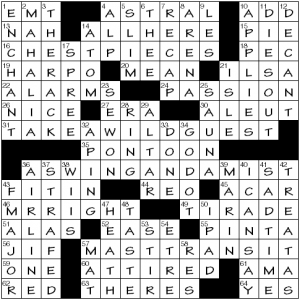 In the theme phrases a double-S becomes an ST bigram.

Not an overly ambitious theme, but it gets the job done, and it’s well executed in that the fill is quite clean, nor are there SS bigrams anywhere in the grid. NICE touch (26a)

Let’s start with the obvious: this puzzle has the word SUCKITUDE in it! SUCKITUDE is such a funny word! And Patrick Berry wrote it into a puzzle! I’m so pleased, I could end my review right here with five stars. But then we wouldn’t be able to celebrate the other great things about this puzzle, so against my better judgment, I will proceed with this write-up. 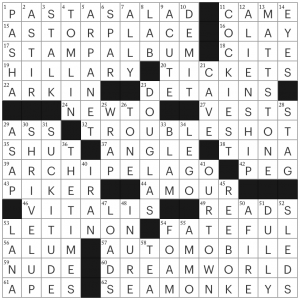 The layout of the grid is a bit of a pro forma themeless design with some stacks of 10s in the NW/SE and some nice long stuff through the middle. For our stacking pleasure today we have PASTA SALAD / ASTOR PLACE / STAMP ALBUM and AUTOMOBILE / DREAM WORLD / SEA MONKEYS. These are all pretty solid, and I loved the clue on STAMP ALBUM (It’s bound to help a philatelist?) and the Very New Yorker ™ clue on AUTOMOBILE (Ray Bradbury called it “the most dangerous weapon in our society”).

During the solve, I realllly slowed down on that SE stack—I had DREAM LANDS in there for far too long (thrown off by a misreading of the clue which I thought indicated a plural). And now I can’t get the Rilo Kiley song DREAMWORLD out of my head, which I am ok with. I also don’t think I know what SEA MONKEYS are or how they could be sold in comic books. Ok, I googled it and um, here is this article in the NYT with the subtitle “A former 1960s bondage-film actress is waging legal combat with a toy company for ownership of her husband’s mail-order aquatic-pet empire.” As today’s NYT might say, a lot to UNPACK there!

Overall, most of the stars from me. Thanks for a puzzle absolutely devoid of (and filled with) SUCKITUDE, Patrick Berry!

Theme: The letters FL– are prepended to common phrases. 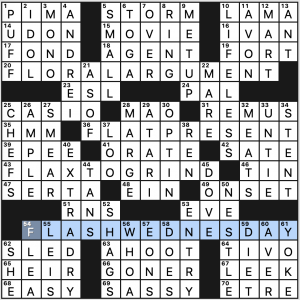 Enjoyable theme with long, evocative base phrases and entries with good surface sense.

Only two fill entries are longer than six letters, and they might be negatives in other contexts—LIFELESS and EXTRA DRY—but in a crossword, they add some color. The rest of the grid, though, is loaded with 4s and 5s of the standard fare: ORATE, OPT IN, LEIS, EONS, EPEE, etc., etc. I wouldn’t go so far as to call it LIFELESS or EXTRA DRY, but a little more sparkle would be nice. Maybe it’s a touch dry.

Solid add-some-letters theme, but the fill could use some sparkle. 3.3 stars.