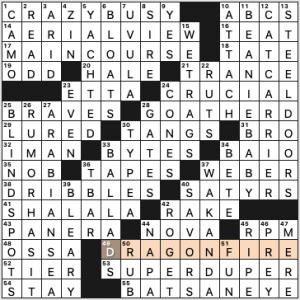 I’m enchanted by some of the crunchy new fill here. I do use CRAZY BUSY, absolutely, and I love it as a 1-Across. Basketball DRIBBLES are good, and Daenerys’s DRAGON FIRE is fierce. Not sure I’ve seen a CAT CARRIER in a crossword before, but that’s another great entry. BLIND SPOTS are unfortunate things to have (we’ve all got ’em), but I’m not blind to the coolness of “RUMOR HAS IT.” Then there’s WAKANDA, and the Wakanda “W” salute is a solid alternative to shaking hands.

4.25 stars from me. The corner stacks of 9s and 10s brought a lot of oomph to the enterprise, and I liked it. 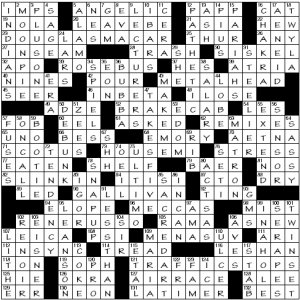 This one proved to be just the right amount of challenge. The theme mechanism caught me every time I encountered it, and I couldn’t deduce the rationale for it until encountering the revealer down at the bottom.

And TRAFFIC STOPS are accurately described as searches, but of course little searching has to be done by the solver to uncover what’s going on.

Was struck during the solve by a large number of slightly tricky and very good clues; let’s see if I can locate them all. 27a [It runs down your leg] INSEAM, 39a [Small but important chambers] ATRIA (heart), 45a [Future reporter] SEER, 77a [Off the table, perhaps] EATEN, 98a [Drops by the ocean] MIST, 114a [Puma feature] TREAD (shoes), 38d [Amateurs don’t get it] SALARY, 106a [Class that’s for the birds] AVES (taxonomy), 110d [Inner burning] ULCER, 113d [Blow] COKE, 117a [Attack pointedly] STAB, 124d [Rocks in a sling] ICE (cocktail). These all could conceivably have taken a question mark or a perhaps/maybe, yet only one of them does.

I didn’t include 94a [Split to join] ELOPE in the list above because it’s been done so many times. Nor 127a [High competition] AIR RACE, because it’s too weird to be misleading. As for clues explicitly giving a heads-up with a question mark, there’s just 43a [Sabbath celebrator?] METALHEAD (Black Sabbath, the heavy metal band). I’d say the lesson here is that if you want an easy way to increase the difficulty of your crossword, be abstemious with question marks, maybe.

ASIDE: Going to share an interesting usage discussion I encountered when deciding to use ‘interpose’ above. This is from m-w.com.

INTRODUCE, INSERT, INSINUATE, INTERPOLATE, INTERCALATE, INTERPOSE, INTERJECT mean to put between or among others. INTRODUCE is a general term for bringing or placing a thing or person into a group or body already in existence. introduced a new topic into the conversation // INSERT implies putting into a fixed or open space between or among. inserted a clause in the contract // INSINUATE implies introducing gradually or by gentle pressure. insinuated himself into the group // INTERPOLATE applies to the inserting of something extraneous or spurious. interpolated her own comments into the report // INTERCALATE suggests an intrusive inserting of something in an existing series or sequence. new chapters intercalated with the old // INTERPOSE suggests inserting an obstruction or cause of delay. interpose barriers to communication // INTERJECT implies an abrupt or forced introduction. interjected a question 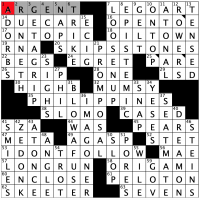 This one took me a few beats longer than normal, and I am not sure why. Likely because Erik’s fingerprints are all over this one! Slightly tough for a Saturday LAT, but still accessible. Tons of great entries in here, per usual for the LAT AND Erik Agard puzzles. I am not familiar with Leslie Rogers, but that name was in the database here on the site, so this is likely not a debut, but what do I know? A solid 4.6 stars today. 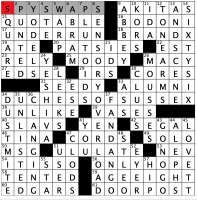 Usually Stan’s are a tad easier, but this one gave me fits. I had a decent start, but the NW corner gave me all kinds of issues. The entry at 7D was DEFINITELY a new word to me! (See below!) But a fun Stumper nonetheless, as quite a few entries had me smiling. 4.4 stars today.