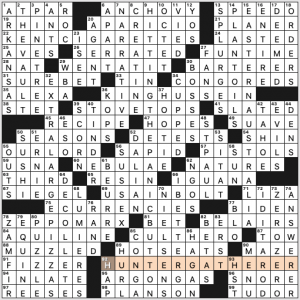 We’ve got a plus-sized themeless puzzle here, roughly twice the number of entries as a standard Walden Saturday puzzle. Alas, the clues are pitched more to a Wednesday-ish level, because you’d expect Byron’s themeless clues to make this puzzle take a lot longer than the typical Sunday puzzle. And for me, it fell more quickly than most Sundays.

There are some awkwardnesses like FIZZER and ANSWERER and BARTERER’s -ERs, and that plural CONGO REDS. I also question whether bitcoin belongs in the E-CURRENCIES clue; Google results suggest that e-currency is used to refer to all sorts of things that have nothing to do with the cryptocurrency called bitcoin. Also, starting 1-Across with the flatness of AT PAR isn’t great.

I’m not finding myself with a whole lot to say about the puzzle tonight, and the family has started playing blackjack without me so I BETTER GO. 3.5 stars from me. Would have enjoyed it more with twisty Byronesque clues peppering the puzzle.

Man, have I had enough of staring at this screen – and I have a Zoom book group this afternoon and a Zoom meeting this evening. This review will be brief.

All the theme answers are phrases with slang words for money. 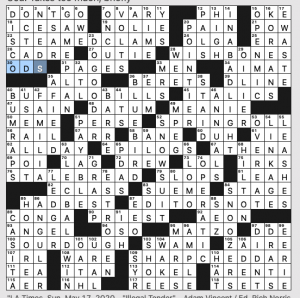 A solid, enjoyable theme that did not telegraph the answers. Nice.

What I didn’t know before I did this puzzle: that BONES is a slang word for money.

Our theme is phrases whose second word can indicate something spoken (similar to this recent super-fantastic puzzle) after a change in meaning. 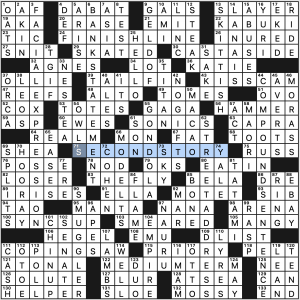 A good set, I think, and (mostly) consistent. A few things are a little off target, but it’s still enjoyable. It’s also impressive that two of the Down entries cross two other theme entries (each) without sacrificing the fill much, if at all.

Plenty of goodies to admire here: SKITTISH, KABUKI, TAILFIN, KISSCAM, THE FLY, “HOORAY,” TATAMI, “NO GIFTS,” SYNCS UP, GONDOLA, and SMUGGLER. And nothing of significance to scowl at. Good fill.

Title was a dead giveaway for this one! A breezy over-the-plate offering appropriately placed in the mix. 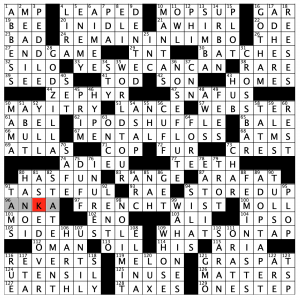 THEME: Phrases where the last word is a dance.

Gotta say, I did not see that revealer coming! Even though it is certainly not the first time Evan has used that conceit (not even close), nor will it be the last time (not even close), it totally- and pleasantly- caught me off-guard in an otherwise simple puzzle.

This is a good one to hook newer solvers, which the WaPo is careful to include amongst it’s more… shall we say… inventive themes. If I had one nit to pick, it would be that TAP as a style doesn’t seem to gel as well with the other, more specific, dances.

The real joy in this was the cluing for the fill. Some solid trivia, and some cleverness all around.

I apologize for the late write-up and the brevity!