I thought I knew what was going on with the second theme answer. I was wrong. It wasn’t phrases involving clothing. Hmm. 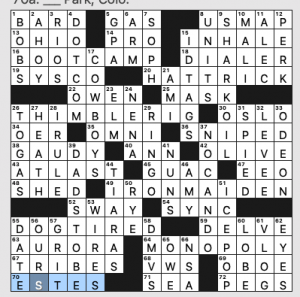 Luckily, there’s a revealer: 64a [Game whose tokens have included the starts of 16-, 20-, 26-, 49- and 55-Across]: MONOPOLY. I guess if I had the sort of family that played board games during quarantine, I would have known that. We don’t. The rest of the family is doing jigsaw puzzles. I’m reading actual books and, of course, doing puzzles. A solid theme, although THIMBLERIG is “what I didn’t know before I did this puzzle.” M-W online says  it’s “a swindling trick in which a small ball or pea is quickly shifted from under one to another of three small cups to fool the spectator guessing its location.” So that thing they do during the baseball game when they show a ball under the caps? That’s THIMBLERIG.

BLOWS THE WHISTLE (61a, [Exposes wrongdoing, and what each starred answer frequently does]) is our revealer, indicating that the other theme answers are people who blow whistles for one reason or another. 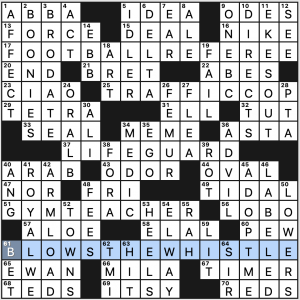 A quintessential Monday puzzle, I think—straightforward, accessible, clean. A good puzzle to share with the quarantined, new-to-crosswords solvers in your life.

It even includes fun entries like BRO DATE, ROYAL WE, “ADOPT ME,” and BOONIES [Hinterlands]. That’s what we always called the jungle on Guam when we were kids, and going out into them was “boonie stomping.” Funny, I just googled that phrase, and all the hits referred to Guam; does no one else use it? I had no idea.

Back to the grid. It goes easy on the crosswordese with entries like ASTA, ELL, EL AL, and ABBA—nothing over-the-top, but common enough entries that every solver needs to learn them. The scowliest entries are IDLER and the partial FOR A, but those are put down quickly with straightforward clues.

All in all, a fast solve with a clean grid and a straight-over-the-plate Monday theme. 3.7 stars. 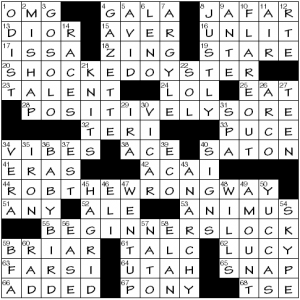 I’m going back to bed.

We’ve gotten to the point in pandemic isolation that I really only know what day of the week it is by crossword puzzles, and given that I am reviewing a fairly easy New Yorker puzzle, it must be Friday. Wait, hang on, sources tell me today is actually *Monday*, so maybe I just lucked out on this one and happened to be on the same wavelength as constructor Anna Shechtman today! 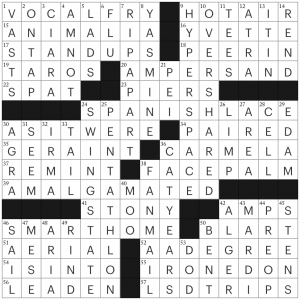 The top half of this puzzle flew by, with VOCAL FRY going in immediately (which may be less familiar to non-women and non-millennials but which is a perpetual source of self-consciousness every time I open my mouth in public). I also loooved the clue on ANIMALIA (Kingdom for a horse?), so that whole corner just fell into place.

This puzzle is packed with excellent long entries, including: the NE pairing of HYPERSPACE/OVERSHARE, which resonate nicely with their similar prefixes; the SW pair of SWING STATE/PENTATHLON (I was excited to see what Florida would be famous for); and the long acrosses of SPANISH LACE / AMALGAMATED. I didn’t know what a mantilla was, and now I do, and that’s some pretty fun new knowledge.

Other good entries: AS IT WERE, FACEPALM (as illustrated in its emoji here: ?‍♀️), & AMPERSAND (with its own excellent clue of “Thelma & Louise” character?). I didn’t know CARMELA or GERAINT, so the middle of the puzzle was probably the hardest bit for me, and I had AS DEGREE in for AA DEGREE for a while and could not figure out what CATYESRS were. Also had STOic for STONY, an issue I seem to have every time one of those entries is in a puzzle.

Overall, a thoroughly enjoyable Monday puzzle! Tons of stars from me. 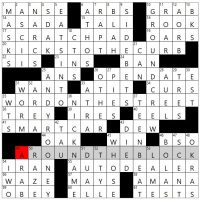 20A: KICKS TO THE CURB [Discards as useless or obsolete]
35A: WORD ON THE STREET [What people are saying]
49A: AROUND THE BLOCK [Through many experiences]

It’s an urban trend with our three theme entries today, and I like that it starts small and zooms out as you go from curb to street to block. I also liked seeing hints of modernity in this puzzle (WAZE, SMART CAR), but there was a lot of crosswordese and rough abbreviations (MANSE, ARBS, BSO, WTS, SDAK, ASCII, CTNS, AORB, BKS). Also, long downs like ANDY ROONEY and TEEN BEAT just make this puzzle feel older than it maybe is. Did RAZE/WAZE get updated from RAKE/WAKE to make a 20+ year old puzzle seem more relevant? That’s my conspiracy theory.