This week, we’re looking for something people who are at odds often do.

When I, bleary-eyed after a full Thursday of Zoom meetings and half-assed homeschooling (“hey, it’s time for P.E. — go outside!”), opened a tab to the WSJ puzzle page around 4pm, some glitch prevented the web app from functioning correctly, and I just had to solve right there and then, so I printed this one out and thus you get to see my handwriting. 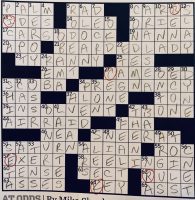 Step One: The title is “At Odds” — what’re the odds that if I took the odd letters of each themer, new, exciting words might result?

Step Two: Note that these new words are, in fact, clues to other entries in the puzzle:

Step Three: The first letters of those entries (circled in my handwritten grid) spell BICKER, which is something people who are at odds often do, and our answer. Nice set of finds, nice connection of the title to the mechanism and to the thematic content of the answer. No bickering from me.

You need a video! Lemme just say that while I am a big Beach Boys fan (God only knows what I’d be without Pet Sounds), their gender-swapped version of [42d: Beach Boys song “___ Kissed Her”]: THEN I is a pale imitation of the original, “Then He Kissed Me” by the Crystals.