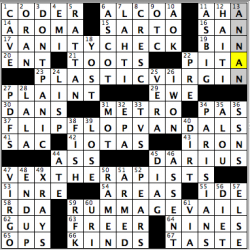 Hello there, everybody! One more day in the life of living under quarantine and shelter-at-home orders! Hope you’re all doing good.

Today’s crossword puzzle theme is all about a simple letter replacement, as five two-word nouns are turned into puns by replacing the word that begins with letter “s” with a similar-sounding word, but one that starts with the letter “v.”

Only little quibble with the grid is with redundant nature of the middle theme entry (flip flops/sandals), but that didn’t take away from the solving experience. Seeing both PARISIANS (34D: [Montmarte residents]) and METRO take my mind away to France, and hoping a getaway to Europe is in the cards sooner rather than (much, much) later (31A: [Urban newspaper section]). Monday marked Haitian Flag Day, so seeing HAITI almost felt like much more than just a coincidental appearance (12D: [Port-au-Prince’s nation]). Also got a chance to learn something completely new with the entry of SARTO (15A: [Italian painter Andrea del ___]). Time for some food, and seeing PITA reminded me of a couple of of my favorites food joints in college, Pita Pit, where I ordered more steak and cheese sandwich pitas than probably any human can consume during a semester in my junior and senior years (22A: [Hummus scooper]).

“Sports will make you smarter” moment of the day: RFK (59D: [Washington D.C.’s ___ Stadium]) – Home to the Washington NFL team since its opening in 1961 until 1996, RFK Stadium was one of the first “cookie-cutter” stadiums in pro sports, built in a wide circular shape so it could host both baseball and football. (Many other “cookie-cutter” stadiums — like the Houston Astrodome, Three Rivers Stadium on Pittsburgh, Riverfront Stadium in Cincinnati — soon followed in mimicking RFK’s design so it could host multiple tenants in different sports. My memory of RFK, which is still standing despite not having an official tenant at the moment, is walking the catwalk in between the press seating area and the media workroom. Almost came down with a case of acrophobia when first walking it and familiarizing myself with the stadium! 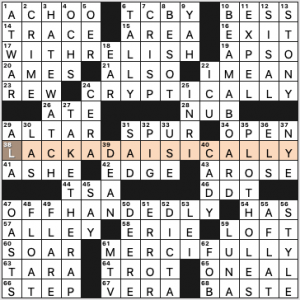 We’ve got a Tom Swifties theme today, with the clue/answer combos that are more amusing than stale Tom Swifties we’ve seen too many times. Most or all of these were new to me (your mileage may vary):

Fun theme for a Tuesday.

There’s some fill here that definitely feels out of place in a Tuesday puzzle, though. OASTS, OCHS, INRI, and possibly SISAL, BESOT, and DICTA? Oof.

A puzzle with two revealers! The title, and 36D! 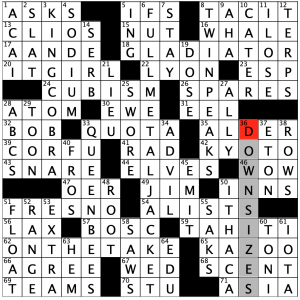 Very much was not expecting the second revealer DOWNSIZES, so that was a pleasant surprise, though I should’ve been suspicious with the direction that the theme answers were going! I’m fairly certain I’ve seen the “bed size theme” before, perhaps more than once, but the DOWNSIZE aspect gave it a unique twist.

Some fun with the cluing, and a few oddities in there. The former includes 68A [Word that sounds the same if its first or second letter is removed] SCENT (I like these types of clues) and 64D [Ending for brown. or rice.] EDU (cute). A bit of weirdness with… oh wait, now I get it… I initially thought the both words were included in the quotes for 1A [Says “Who?”] ASKS. Now that one makes perfect sense! However, it’s hard to get excited over [California congressman Ted] LIEU. Definitely see LIEU in crosswords often, but is congressman Ted crossworthy? It’s a new name to me. 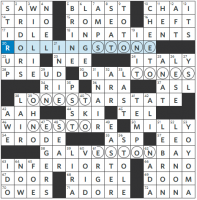 In quit atypical fashion, the revealer to this theme is first, but that’s to allow the STONE to roll throughout the other theme answers. I really enjoyed the attention to detail in this theme – it’s not just STONE anagrammed differently each time. With each themer, the first letter rolls to the back: STONE -> TONES -> ONEST -> NESTO -> ESTON. “On the Move,” indeed!

This constructor isn’t a name I recognize, but his puzzle has intrigued me enough that I’ll be on the lookout for more! Even with a bit of crosswordese, the puzzles was a smooth and enjoyable solve for me, and I found myself looking forward to how the STONE would roll! 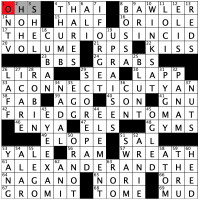 We have books that we didn’t finish – the titles of!

These books all have really long titles, and I’ll bet you may not have known one or two of them, but that’s OK! Believe it or not, during this isolation period, I have hardly cracked a book to read! I should remedy that later tonight! 4.4 stars for another stellar Jonesin’!

I will stop here, since I am way behind in getting this posted! 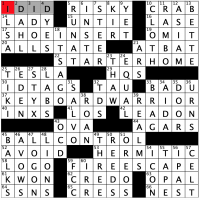 Do we have a debut puzzle? This name was not in the database! If so, congrats! This is a fine puzzle, and should be easily solvable if you’ve ever seen a computer!

Yes, some of these keys are abbreviated in actuality (CTRL, ESC), and there is no HOME key on a Mac (at least not on mine!), but you get the idea. Nice and not too complicated for a Tuesday! Congrats again on the debut, if congrats are in order! 4.3 stars today.