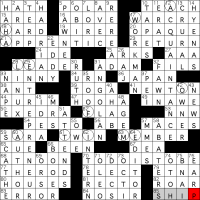 hello and welcome to episode #624 of matt gaffney’s weekly crossword contest, “Now You Sea It, Now You Don’t”. for this week 3 puzzle, the instructions tell us that This week’s contest answer, which is 13 letters long (count carefully!), is something I hope you have with this puzzle. okay, sounds cool. what are the theme answers?

look, this is where i have to admit an embarrassing failure on my part. i spent a good long while after completing in the crossword having absolutely no idea where to begin. from the title, i was thinking this was definitely going to be a meta based on the disappearing ARAL sea… but as much as i wanted to make that work, it wasn’t going anywhere. so i had to put the down for a few days.

when i came back to it, i noticed that there was, indeed, an explicitly indicated theme answer that i had just not noticed at all (!) on the first pass. here it is: {Ghost ___ (the Mary Celeste, the Flying Dutchman, the Black Pearl…or any of 13 herein)} SHIP. well, knowing what to look for makes it a lot easier to find it! here are the theme answers, all of which can take the suffix -SHIP to make a common english word:

the theme answers are a mix of acrosses and downs; i’ve ordered them from top to bottom in the grid by the location of their first letter. and, reading off those first letters, we get A WHALE OF A TIME, which is thirteen letters long. {Monomaniacal captain} AHAB would approve (except that he’s dead, and also fictional).

that was a lot easier once i found the theme hint! so i had a strange experience of solving this puzzle, where it seemed impossible for a few days and then abruptly quite straightforward. it’s an impressive construction, with fourteen theme answers, a few of them quite long, strewn about the grid. it’s a 17×17 grid, so a little larger than a typical crossword, but not hugely so.