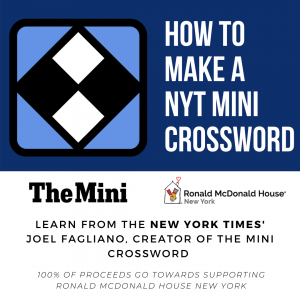 The Wednesday NYT puzzle is by the JASA’s crossword constructing class (and their instructors). A timely announcement: If you’ve been thinking about learning to make Minis, you’re in luck, as Joel Fagliano will teach a class benefiting Ronald McDonald House New York on June 1. No need to worry about coronavirus exposure—the class will be an online one via Webex. Registration is $20, and all proceeds go to Ronald McDonald House, an excellent cause.

Theme: School teachers are re-imagined based on a play on words in the teachers’ titles. 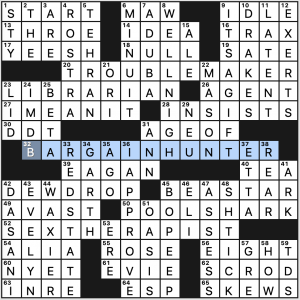 A fun theme—one of those “wish I’d thought of it” themes. It’s only slightly marred by the little inconsistency, but I wish something else could’ve been found. Art teacher? Gym teacher? Math teacher? Hmm. I can’t come up with anything better.

Good long fill with “IT’S A GIFT,” WELL NIGH, and RED STATE. I APPROVE. I MEAN IT! I also like SHTICK, BO-PEEP, and DEWDROP.

BE A STAR is less exciting, and EAGAN [Tony winner Daisy] and AGE OF [___ Empires (video game series)] are tough ones in that crowded center. But given that all the theme entries are smushed into the middle of the grid and the central entry is 13-letters long, it could’ve been much worse. 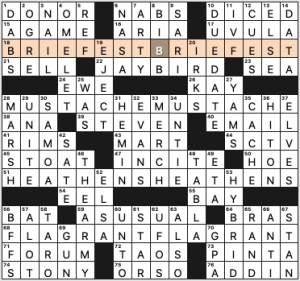 Andy, Natan, and the crew managed to squeeze 64 theme squares into this 16×15 puzzle. Each themer is made of an 8-letter word followed by a pair of 4s that are the two halves of the 8, with the resulting goofball phrase clued accordingly:

Fun theme. It makes my brain tired to ponder brainstorming words that work this way.

I would not be bothered if STOAT never appeared in another crossword.

Four stars from me. How’d you like the group venture? 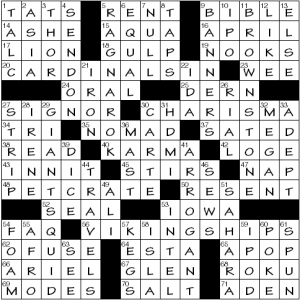 It’s the sort of thing we’ve seen many times before, but that’s not a knock.

Original phrases have a crucial S re-parsed so that they are possessives. In all instances the original words happen to be professional football team nicknames. It’s easier to understand with examples than to describe: 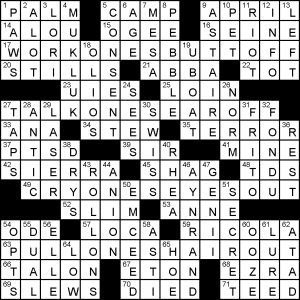 I suppose the main reason this puzzle was written was to see if the risque WORKONESBUTTOFF is fit for crosswords. The rest of the entries form a tight quartet of idioms in the form >VERBORGAN(OFF/OUT). The choice was made to use ONES, which is how they appear in dictionaries, but rarely in real life. The other advantage is ONES is easier to fill around than four YOURs.

Like a lot of puzzles with four spanning horizontal entries, the rest of the puzzle is more about accommodation than including lots of other splashy entries. We are treated to some subtle wordplay with [Day care charge] for TOT & [Cats play with them] for PAWS. RICOLA and MUKLUK are tricky letter strings to predict for those who didn’t know them; FONDU would be too, but it gets a cheesy hint. 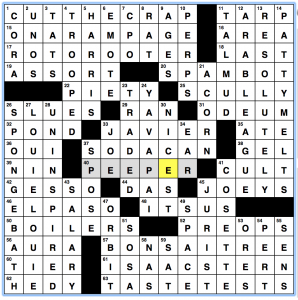 It feels like it’s been a while since we got a themeless from the AVCX, and even longer since it was a KAC Themeless, so seeing his byline in my inbox was a pleasant surprise this Wednesday.  In typical Kam fashion, the grid itself is pretty to look at, and the fill inside is pretty crisp, too: