Take a phrase whose first word is a homophone for a letter, and replace it with that letter. Now clue it in such a way that the latter part of the phrase relates to a word in the clue. That’s our theme today. 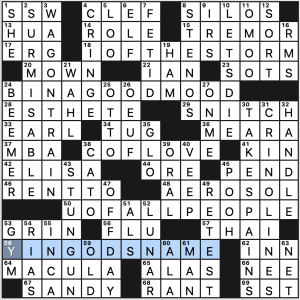 There were a few layers to this theme and I quite enjoyed unpacking them. The theme was unexpected, interesting, and fun, especially with its multiple aha moments. There are a couple little nits to pick, but overall, this was a good time.

Highlights in the fill include WAGON TRAIN, TAKES PAINS, OFF DAY,  and STUN GUN. You may like CRINOLINES [Stiff petticoats], but that was a tough one for me.

The stacked 10s in the NW/SE corners result in some sub-par fill, so I’m not sure that they’re worth it. The SE isn’t as bad with only super-stale SST, but the NW has SSW, HUA, ERG, ELISA, and RENT TO. (CRINGE.) Elsewhere, OMOO and OEUF make their presence known. 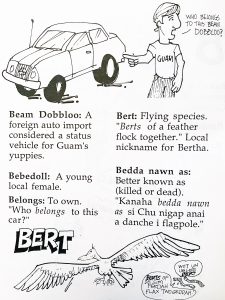 Taken from the book “English: The Chamorro Way”

A fun, layered theme and some good fill raise this puzzle above the lesser fill. 3.8 stars.

Today’s NYT from Andrew Kingsley played easy for me, but had enough going on in the theme that it still felt like a Thursday kind of puzzle rather than a Wednesday: 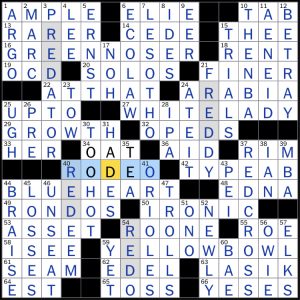 I almost think you could get away with not shading the down RED squares in PREDATOR, FREDDY, REDEEM, and REDO and having that be a fun AHA moment for what all’s going on here.  Each of the theme answers lists a color that, when combined with the RED CROSS happening with the answer, forms the correct color for the phrase.  GREEN NOSER becomes BROWN NOSER with the addition of red, and PINK LADY, PURPLE HEART, and ORANGE BOWL all follow suit

The story behind FREDDY Fender’s “Before the Next Teardrop Falls”, which (as 21D notes), went to #1 on both the pop and country charts, is a pretty interesting one – Stereogum covered it as part of its current The Number Ones series. 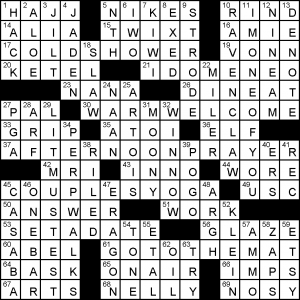 GOTOTHEMAT is a colourful revealing answer for what is in essence a familiar theme concept. SHOWER, WELCOME, PRAYER & YOGA can have MAT added. The clues try to add another layer and get cute by incorporating GOTOTHEMAT in them via cross-referencing, but the result for me is vague and awkward. COUPLESYOGA is also a top tier entry theme or no.

Some tough names from all over appear today: IDOMENEO the [Title king in a Mozart opera] has tricky vowels! RAVENCLAW is something I haven’t seen in a puzzle before, with a suitably leading clue. From a similar era, do people still remember ERAGON?