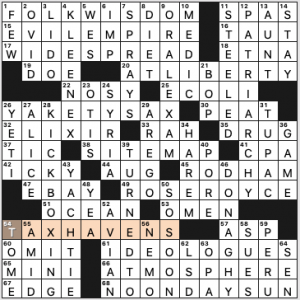 Is it just me or was there a definite “old rich dude” vibe here? We had Ronald Reagan cited in the EVIL EMPIRE clue, the Benny Hill–linked YAKETY SAX, PEAT to flavor scotch, AUG clued with reference to corporate reports, Warren Buffett in the EBAY clue, TAX HAVENS, some IDEOLOGUES in that PATRIARCHY, YACHTIE (?!), and the fictional Jack DONAGHY. It’s too much!

On the women’s side, we have Hillary RODHAM, Bambi’s fictional AUNT Ena the DOE, and fictional ALICE. Blurgh.

Short writeup today! Although I loved the marquee entries in this puzzle (HARLEM NOCTURNE / YOU’RE KILLING IT) and the cluing was top-notch, the fill is a bit clunky in places, so I can’t say I was blown away by this puzzle. I enjoyed the solve, but it wasn’t my favorite themeless I’ve encountered this week. 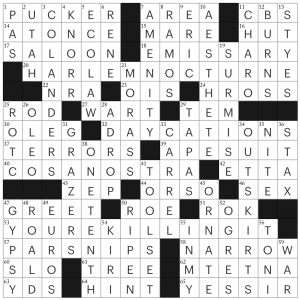 Other great long entries included DAYCATIONS, COSA NOSTRA, COLANDERS (which I could have sworn had two Ls in it), OUTSKIRTS, AESTHETE, PARSNIPS. It was weird to see ECOLAW in the puzzle the day after it appeared in the NYT—not a super common entry!

Fill I could live without: NRA (thankfully clued without reference to the domestic terrorist group, but still better left out of the grid altogether), OIS, YDS, ROK, ZEP, TEM, PAS, H. ROSS, A DROP, OLEO, KNORR. A pretty long list, and though it was in service to marquis entries I enjoyed, I’m not convinced the tradeoff was worth it here.

Favorite wordplay clues: [Straight partner] for NARROW and [French bread since 2002] for EURO, both without ?s!

Overall, lots of stars for the long entries and cluing, but not all of the stars due to the rickety fill. Happy Friday team!

THEME: Period products are hidden in each theme answer 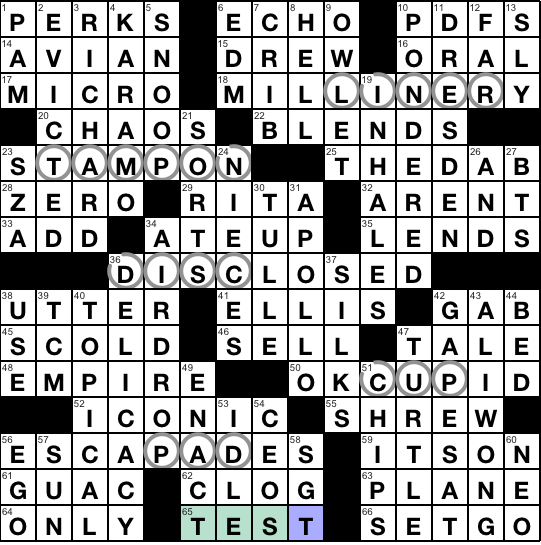 When I saw the title of this puzzle, I was hoping it would be menstruation related, and as soon as I came to STAMP ON I got excited. I really enjoyed the range of the theme answers as well – their randomness tied together by the theme. The set of products felt very full as well, with nothing left out.

Really smooth fill throughout the grid – with a lot that was very much in my wheelhouse, letting me fly through the puzzle. So many great people in this puzzle – including the ICONIC Little RICHARD, ALI WONG, Tracee ELLIS Ross, and KARAMO Brown.

Great clue for EMPIRE [Galactic government ruled by the Sith in “Star Wars”], given that yesterday was the 40th anniversary of The Empire Strikes Back. My favorite clue, as an owner of Red Eared Sliders and lover of TMNT and all things Mario, goes to TURTLE [Leonardo or Koopa Troopa… more or less].

And here’s a best of ALI WONG if you need some laughs: 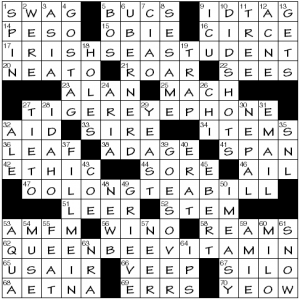 It’s one of those before-and-after type word sequences. What TIES these four TOgether (≈27d) is that the transitional word functions as a homonym for a letter.

All well and good, though I’m disappointed the transitional ‘letters’—C-I-T-B—don’t spell or phoneticize to anything.

Dehydrogenation is the removal of hydrogen from a molecule, ergo we have theme answers missing an H. 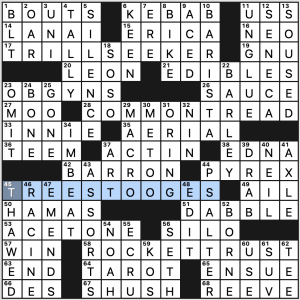 Yesterday I gave a lesson in speaking Chamorro (Guamanian). Today’s theme seems like another one. I’ve been hearing people speak like this since I was about, oh, tree years old. Other Chamorro words you should know: true (“to get to the beach, you have to go true the jungle”), trow (“trow me that coconut”), and triff (“look at this nice shirt I got at the triff store!”). Needless to say, I enjoyed this theme.

Other goodies in the fill I liked: “SILENCE!,” ME TOO, BARISTA, PYREX, DABBLE, “I’M BEAT,” and PSALTER, even though that last one was tough. There are some mid-range entries ASSORTS, EMENDS, ACETONE, O-RING that are on the DRAB side.

Nice theme (extra fun for me) and solid-enough fill. 3.5 stars.