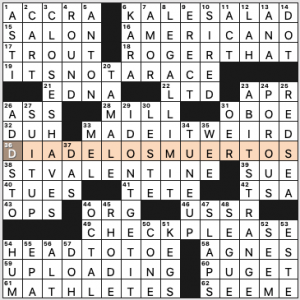 Maybe Wyna and Erik should partner up on all the puzzles. Their joint byline is shorter than Brendan Emmett Quigley’s solo byline! Plus, they each do amazing work individually, and their joint efforts are equally good.

Also did not know that Beyoncé has recorded in Spanish before encountering 7d. [“___ Gitano,” Spanish-language hit for Beyoncé and Alejandro Fernández], AMOR. You can listen to the song here if you like.

Not too keen on RED SEA near USSR with its [Red states, once] clue. Yeah, yeah, we know the NYT editing team doesn’t give a rat’s 26-Across about such overlaps, but it does bother a number of solvers.

THEME: Types of cherries are at the “top” of familiar phrases. 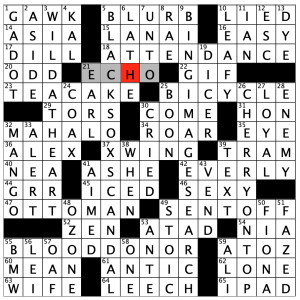 Can’t expect much more from a universal- a nice, clean grid with an accessible theme. The AHA moment was gentle and pleasant, and it helped me to fill in BING, since BING IMAGE SEARCH is not something I use. Come to think of it, I don’t think I’ve ever used BING at all! I can’t picture the page layout.

An enjoyable start to the puzzling day. 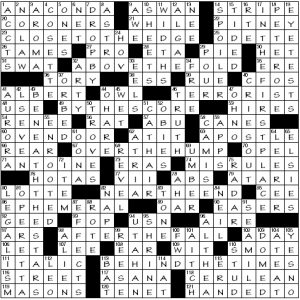 Pressing question, as I am late for an engagement and won’t have time this morning for a full go.

We’re being very literal when it comes to location:

Will try to expand on the write-up this afternoon. Feel free to discuss the crossword. 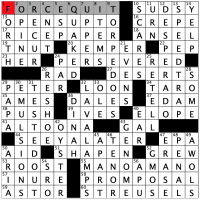 This is not a familiar byline to me, but we are evidently on the same wavelength, since I finished this in under 4 minutes! This might be the fastest I have EVER finished an LAT Saturday puzzle! Nothing in here is really tough, but that is fine. I think some people think that a rapid solve is no fun for the solver, but the joy is still there. It just goes quicker sometimes! This is a smooth construction, and I have another setter that I would like to meet! 4.3 stars today.

That is all! Next LAT writeup for me will be on Tuesday! 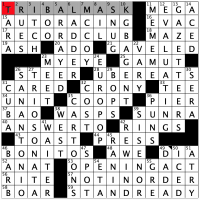 This was a Stumper! Well over twenty minutes on this solve. Some of these clues seem quite vague, maybe almost a stretch, but in the end, that is what a Stumper is supposed to be! Yes, I learned a new word or two, and there are a couple of really great entries in here that made me smile. I have never met Matt, but I am hoping to someday at one of these crossword tournaments. The ACPT is in September, but will we be back to normal by then? Hard to say. I hope so, but in my heart I doubt it. I miss all of you! 4.6 stars for this super toughie.

Have a safe and healthy holiday weekend!