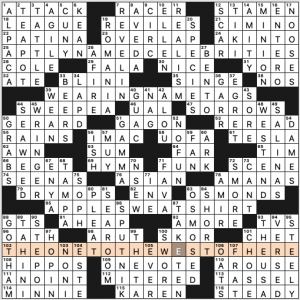 I’ve got things to do with my family this evening, so I opted to skip toying with the Clue-related theme to solve the puzzle within the crossword. You can read the theme explanation at Wordplay. If you solve the puzzle in .puz format, you’re missing the shading for the Clue “rooms” in nine sections of the grid, but it’s not hard to imagine they’re there with the clues and the puzzle notes. Short form: each “suspect” answer is the first name of a famous person with an occupational surname, ranging from TIKI Barber to GERARD Butler. The puzzle notes list the occupations, you match ’em up, follow the directions in the long theme clues/answers, and there you go. There’s also a MCGUFFIN spelled out around the black-squares plus sign in the center of the grid.

I was definitely distracted by the odd 81d. [Space to maneuver a ship], SEA ROOM (I’ve never captained a ship, so this wasn’t in my vocabulary) so close to 44d. [Major source of oxygen in the earth’s atmosphere], SEAWEED, and with “room” in a couple of the theme clues. Why is an awkward, obscure entry like SEA ROOM in here at all given those other issues?

Not loving the chunkiness of the grid, with all those swaths of 6s and 7s—consider the NE corner, where the theme’s …CELEBRITIES and TIKI are the only required fill, but we get prefix ENTERO– and unpleasant NOOSES. I guess the grid chunks look more like rooms in Clue that way, but I count on puzzles to have good fill throughout and I wasn’t digging this one’s.

Hope you enjoyed this one more than I did!

I was tipped off that I’d probably find this puzzle challenging today, and that wasn’t a lie. Probably the most difficult solve I’ve had with a themed WaPo!

THEME: Starts of words/phrases are moved forward and a new phrase is the result. 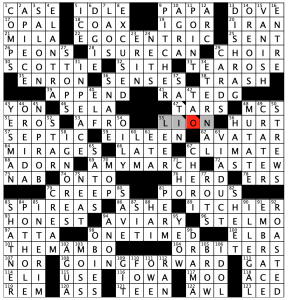 One thing I didn’t notice until typing this up right now and highlighting the moving letter is that each letter is also moving forward, step by step. That’s an excellent touch, and I’m sure that added a lot of restraint. The left/right symmetry of the puzzle helping to execute the theme.

I will say that, for me, I solved this mostly as a themeless, and I much prefer puzzles where the theme helps me in the land of the fill. But I had a lot of difficulty seeing the theme to being with, and rarely was able to “back-solve” an area in order to help me. It felt like difficult anagrams! Like, I knew that I wanted the letters WASTE in the answer for 72A [“Haste makes ___” (4)]. But I couldn’t see A STEW. I knew I wanted GRATED, but I couldn’t see RATED G. ICHOR was completely new, so I had no hope of figuring out CHOIR. Same for SPIREAS, which autocorrect wants to fix right now.

ITCHIER/RITCHIE and APPEND/NAPPED were the only two pairs that synergistically helped one another during my solve.

Tough, but appreciated challenge all around! OREO O’S looks so weird in a grid, doesn’t it?

As a little bonus, this puzzle appears in a special edition of the Post Magazine called “America, Resilient,” which included stories about hope and building community amidst the pandemic. So both the theme and the title are especially apt.

Hey, it’s been a while since I’ve seen Paul Coulter’s name in the byline! Like, at least a month! 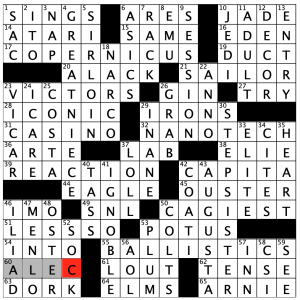 Well, I like the idea here, but I’d be lying if I said I paid any attention to the actual elements part of the clues at all. Many of them I’ve never heard of and wouldn’t know their symbols anyway. But since the first part of the clue actually clues the correct answer, why bother looking at the harder second half? So this became more of a cerebral “Hmmm… interesting” thing for me.

Found this much more difficult than a typical Universal all around! Hang-up areas were 11D [Mature] ADULT since I had difficulty equating the two words, and 26D [Take impolitely] GRAB since I read the clue as “Talk impolitely” and refused to see it any other way.

Cool idea! But solved like a themeless in the end.

Theme: Phrases with a hidden word naming some sort of fastener. 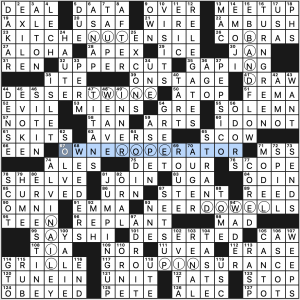 Simple enough theme and just right for a Universal Sunday outing. I may be wrong, but I imagine the niche this puzzle (in general) is filling is one for easy 21xs—to give less experienced solvers something meatier, but still solvable within a short amount of time. Something to build up confidence before tackling trickier stuff. If that’s the case, this is a perfect fit for that niche.

Lively fill in TURN GREEN [Show envy, metaphorically], which could also work with a seasickness clue, ERNESTINE [Lily Tomlin character at a switchboard], “…one ringy-dingy..,” and UPPERCUT. PEPSICO is a little on the trickier side, especially for newcomers, but the rest of the long fill, RELEGATES, JUMPING UP, DESERTED, are solid, if not exciting. On the shorter side, I don’t care much for MSS and I’m not sure it’s widely known as the abbreviation for “manuscripts” outside the publishing world. This could’ve easily been MST or even YSL which I believe to be more common abbreviations.

Today’s theme answers are all Down and all have “down” in the clue. 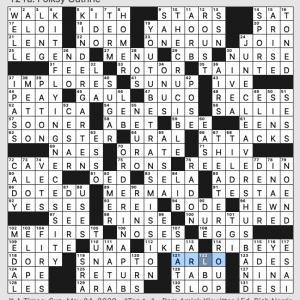 I liked this theme even though it’s not really wordplay and it’s not that challenging. It was consistent and fresh, at least to me.

What I didn’t know before I did this puzzle: that TESTAE are seed coats of acorns. I did not need to know that.