This was not my favorite Monday puzzle. I figured out the theme with the second theme entry and knew what the revealer would be, at least in principle. That took some of the fun out of it, and there’s some strained fill that didn’t help.

Four consecutive letters in each theme answer are circled. 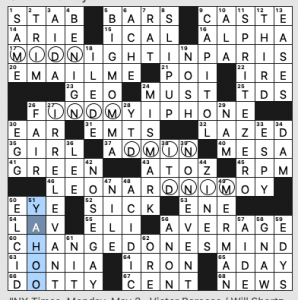 And the revealer: 60a [Decided otherwise … or a hint to the four sets of circled letters] is CHANGED ONE‘S MIND.

The strained fill is 24d, [Place an “X” in the wrong spot on, say]. MISMARK? I don’t think so. Yes, I know, it’s technically correct. It’s just strained, as I said. 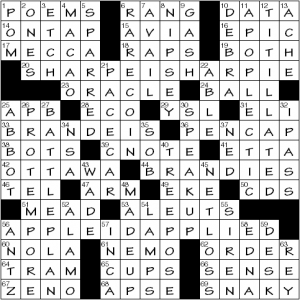 In which a word or phrase containing the bigram EI has those letters transposed to form the second part of the answer.

Only three themers, and one of them’s split. But in exchange we get some very impressive stacked vertical 10s: 11d [Hopping mad] APOPLECTIC / 12d [Excited, in a sense] TITILLATED and 26d [Latin phrase meaning “for now”] PRO TEMPORE / 27d [It’s drawn up in a war room] BATTLE PLAN. Superb stuff. 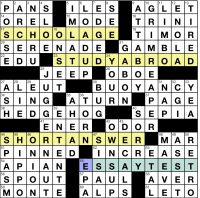 17A: SCHOOL AGE [Old enough to start kindergarten]
23A: STUDY ABROAD [Attend a foreign university, say]
44A: SHORT ANSWER [Kind of exam with brief responses]
56A: ESSAY TEST [Exam answered in a blue book … and a phonetic hint to 17-, 23- and 44-Across]

Pronounce 56A a slightly different way (S-A test) and you have the hint to the theme: each of the theme entries is an S___ A___ phrase. And this puzzle is the test, I reckon. The odd thing is that SHORT ANSWER is literally a type of S-A test, whereas the other two theme answers aren’t. Yes, they’re both education related, but it seems like an odd mix of thematic elements that didn’t fully land for me.

New to me: [Done to ___: perfectly cooked] A TURN
Fun for me: Long downs like JUGGERNAUT and GRIM REAPER (too soon?)
Bummer to me: Heidi of the ALPS and MAEVE Binchy are the only two women in this entire puzzle, compared with OREL Hershiser, TRINI Lopez, Sonic the HEDGEHOG, PAUL, Jared LETO, NEHRU, and ATTA BOY for the men. 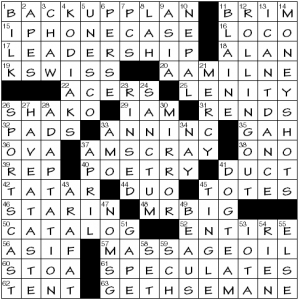 As Rachel is having some technical difficulties which preclude her write-up, the 1a BACKUP PLAN turns out to be my stepping in.

This was a welcome mid-level challenge today. Big stacks (trip tens!) in all four corners and, even though the center of the spiral at first seems cut off from the rest of the grid, there are four sets of two-letter entry points—they more than adequately integrate with the rest of the crossword.

Weakest entry—and really the only fault I can point to—is 33a [Womenswear conglomerate named after a fictional Ms. Taylor] ANN INC.

So let’s take a quick spin through around the grid.

Overall, the puzzle had the distinct hip vibe that the New Yorker typically goes for: referring to AA MILNE as Wodehouse’s frenemy, “Def!” for TOTES, invoking DivaCup in a clue for PADS, K-SWISS as tennis kicks, et al. (20a, 45a, 32a, 19a)