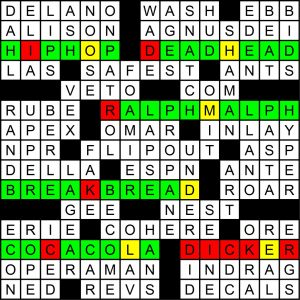 Prompt from Patrick: What card game is hinted at by this puzzle? Let’s take a look…

…but first, let’s note five of the many cleverly misdirecting clues in this one. Not meta-related, but fun:

15-A: [Mass number] = AGNUS DEI. I prefer when, as here, the ? is left off a clue like this. Woulda ruined it here, especially with the unusual letter combinations in the correct answer making you think you’ve made a mistake.

66-A: [Sporting apparel that’s unorthodox] = IN DRAG. Such a convincing adjective disguise that verb is wearing.

Punctuating the puzzle with clues like that keeps your mind sharp, since you never know where a misdirect is lurking…

So now let’s get to the meta. Solvers love when a trail of meta clues logically reveals itself step-by-step, and Patrick is particularly good at creating such trails that are especially intricate and beautiful. Let’s follow this one:

Insight 1.0: There are five almost-symmetrically placed entries in the grid whose halves differ by just one letter. They are:

Now what? Insight 1.5 (a small one): the ten different letters are probably important, so let’s line them up:

Insight 2.0: Now what? Well, we never did account for that one non-symmetrically placed answer, HIP-HOP. Its grid counterpart does not fit the pattern of the other theme entries, and its clue makes no sense: [Deal] for the answer DICKER.

Insight 2.5: The clue “Deal” looks like a nod to the title (“Double-Deal”), and Insight 2.75: the word there, DICKER, is missing only one letter from the first column of letters in Insight 1.5 (IDRKC). That can’t be a coincidence! And let’s take a moment to notice how subtly but clearly each of these steps is marked along the trail; they’re non-obvious enough that you get a little a-ha moment every time (and a little jolt of pride), and also clear enough that you know 99+% that you’re on the right track.

Insight 3.0: Well, we still haven’t used the other line of those letters: OHMDL. You might have been able to guess the answer here (as I was) by noticing that the missing E from the left column could be used in the missing right column to make HOLD ’EM, but you’d still need to backsolve this last leg to be sure. So let’s move along to Insight 3.5: In the order of DICKER, take the correspondingly-changed letter in the second column of letters. Like so:

And you’ve got your answer, Texas HOLD ’EM, or just HOLD ’EM as it’s usually called.

So the one aspect of this beauty that I don’t quite understand is that final double usage of the E. I see that we’re re-using the E, which makes logical sense since it’s the sixth theme entry (symmetrically placed from HIP-HOP), and that’s a pretty meta thing to do. It bothers me extremely slightly that you don’t derive the E in the same way, and that I can’t really find a reason for justifying keeping the E. Open to amending this nitpick if someone can enlighten me in comments, but I just had DICKER and HOLD?M and knew it had to be the answer, but didn’t totally get why I was just pushing the E over left-to-right. Actually, now that I’m typing this I see that the word DICKER couldn’t itself have been a word with two halves differing by one letter since then there would have been no mystery as to it being a secret sixth theme entry. OK, that works for me. No blot.

4.75 stars. A beautifully hidden trail, requiring you to glide from grid to clues to notepad to title over and over again, with lots of intriguing revelations along the way. Bravo, Patrick.

This entry was posted in Daily Puzzles and tagged contests, Patrick Berry. Bookmark the permalink.