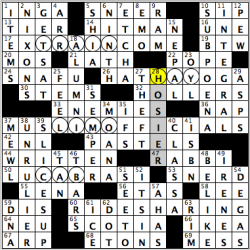 Good day, everybody! I hope you are doing well today, and before we stray too far from Memorial Day 2020, definitely want to send a heartfelt “thank you” for all of the people of the American armed forces who sacrificed their lives to protect the freedoms our country enjoys, and I am sure a number of you reading this have had family and/or other loved ones who had served in the armed forces. Once again, thank you.

Some of you might have taken car rides this past weekend for the holiday, and today’s crossword is all about catching a ride as the first four theme entries have a run of letters embedded (in circles) that form a type of ride. The final theme entry, RIDE SHARING, acts as the reveal (60A: [Cost-saving travel option that hints at the puzzle theme]).

Really got myself into a jam at the beginning, entering in “scowl” for SNEER (5A: [Meanie’s look]) and putting in “LEO” for 9D, and those errors were kept in the grid even longer when being 100 percent sure of the SHIA crossing (5D: [LeBeouf of “Disturbia”]). I think it was about four or five years ago when I first learned that SNAFU was actually an acronym: “situation normal: all f****d up” (24A: [Major mix-up]). I’ve been trying my best to know all about MOANA, the Disney animated movie, because of its popularity, but really liked seeing this non-movie-related clue as well (34D: [Ala ____ (open-air shopping center in Honolulu]). A couple of weekends ago saw the running of the final two episodes of The Last Dance documentary on ESPN, taking an in-depth look at the inner workings of the Chicago Bulls NBA dynasty, and one of the 10 episodes hit on the “BE LIKE Mike” campaign of the early 1990s put on by Gatorade (48D: [Emulate]). Seeing the 10-part documentary, among other things, made me fully realize the global impact advertising had in making turning Michael Jordan into one of the few true global icons of the 20th century. I’m pretty sure I knew these words by heart at one point or another when I was 10.

“Sports will make you smarter” moment of the day: RAM (9D: [Zodiac beast]) – Currently one of the top doubles players in tennis, American Rajeev RAM has broken through as a Grand Slam winner over the past couple of years, pairing with Czech Barbora Krejcikova to win the 2019 Australian Open mixed doubles championship and with British player Joe Salisbury to win this year’s Australian Open men’s doubles title. Ram also has two singles titles to his credit, both occurring at the same event: the Hall of Fame Tennis Championships in Newport, R.I., in 2009 and 2015.

Thank you so much for the time, everybody! Have a wonderful —and safe — rest of your day and, as always, keep solving! 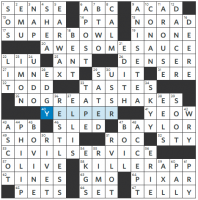 I know I often kvetch about puzzles being dusty or seemingly republished from thirty years ago, but this puzzle is anything but that. It has a fun theme for a modern concept (YELPER) along with some thoroughly fun and modern revealers, including AWESOME SAUCE and KILLER APP. I wasn’t familiar with the last one until I looked it up: a KILLER APP is “any computer program or software that is so necessary or desirable that it proves the core value of some larger technology” – basically, an app or program that becomes essential to and almost synonmous with the device or operating system.

Other random thoughts:
– While the location for YELPER in the grid seems an unusual place for a revealer, I did enjoy that the puzzle featured TASTES in a symmetrical location.
– 47A is a prime example of how you can clue an otherwise innocuous word to feature women (and successful ones at that). Here’s to the Lady Bears at BAYLOR!
– I can’t tell you how long I tried to type in something Seuss-ian for 2D [Layer of green eggs]!
– I’m usually annoyed at women in puzzles being clued only in their relationship to a man (EDITH for [Archie’s wife] here), but this puzzle has some equality in that it also clues a man only through his relationship to a woman (PHILIP for [Elizabeth’s husband]).
– The clue for ELLIS as [Island with an immigration museum] should remind us that we are a nation of immigrants who all supplanted native peoples who were already here. To deny future immigrants the same hope of an American dream is, well, un-American.
– Hopefully where you are isn’t DENSER than it should be – stay six feet apart and take care of yourself and each other. We’ll get through this together! 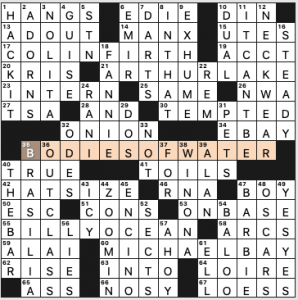 My eyes lit up when I saw Neville’s byline, and then 1a and 1d were both colloquial and contemporary—[Chillaxes (with)] for HANGS, plus HACK IT. So I was predisposed to like the puzzle and excused the blah AD OUT and STN in that corner.

The theme revealer is right through the middle: BODIES OF WATER are 35a. [What 17-, 21-, 55- and 60-Across end in], and those four themers are famous(ish) people whose surnames are all wet.

I would call the theme solid but it’s more liquid, isn’t it?

3.75 stars from me. Would have been nice to have a more modern LAKE and something other than an all-male theme. (My personal policy is that thematic “tightness” gained by including only men as entries in a “members of a set” theme is useless, and it would be better to diversify.) 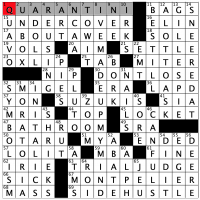 This is puzzle 990, and the flavortext says this is the “last themeless till the big one.” I can only assume the “big one” is puzzle 1,000, which will be here in just a couple of months! At any rate, we have a smooth themeless here. I keep forgetting to check if my timer is on, but this one took about 4 or 5 minutes, if I had to guess. 1-Across is a stellar entry! See below for an explanation. Hope you’re enjoying a light holiday week! 4.4 stars for this one. 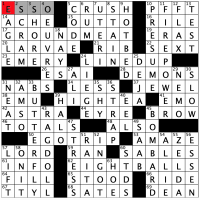 The revealer is so clever, it took me a minute to see what was going on! Or maybe I’m just tired:

All of the themers can precede the word “ball”, as in ground ball, meatball; you get the idea. And there are four theme answers, each with two words that have this quality, and thus you have EIGHT BALLS. Clever! Astounding! Or yes, maybe I am just stressed out and need a nap! Or maybe it doesn’t take much to amuse me! At any rate, and for whatever reason, I found this a nice, tidy “a-ha!” moment for a Tuesday puzzle. Hope you enjoyed it as well! 4.5 stars.