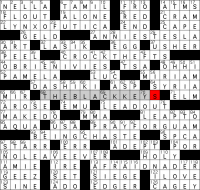 hello and welcome to episode #625 of matt gaffney’s weekly crossword contest, “Sit Down for This”. for this week 4 puzzle, the instructions tell us that This week’s contest answer is a 68-Across lyric that sounds like it’s about solving meta-crosswords.. sounds intriguing. what’s 68-across? it’s {Two-man rock band from Akron} THE BLACK KEYS, straight across the center of the grid. and … well, i certainly don’t know any of their songs, let alone lyrics from said songs, but the name of the band is intriguing, especially in light of the title, and especially especially in light of the play on words we did two weeks ago here with alicia keys.

with that in mind, let’s look at the other theme answers, all of which are made-up phrases that are exactly 11 letters long:

it’s not that hard to piece together now, even though there is one big leap. 8 theme answers x 11 letters each = 88 total letters, exactly the same as the number of keys on a piano, so we could just associate each one with a piano key in order. then the name of the band tells us where to look:

i actually made this a little harder on myself than i needed to, just because i didn’t quite realize that i could string all eight themers together like that and lay them on top of a keyboard. instead i went hunting around for things i could spell out of selections of letters that could represent the black keys in a set of consecutive keys, and found YOU early on in LYNX OF UTICA. once i got as far as YOU CAN SEARCH, google was able to do the rest for me. (“you can search”, indeed!) anyway, the full lyric here, as you can see from the image above, is YOU CAN SEARCH FOREVER / YOU MIGHT NEVER FIND, from a song called eagle birds. and i suppose that can describe the experience of trying to solve a tough meta, but it certainly was not my experience of this one.

still, it’s a great idea for a meta, deftly executed. 88 letters in theme answers <=> 88 keys on a piano is a nice association, and then using THE BLACK KEYS as an extraction mechanism is inspired. finding a relevant lyric of the right length is peachy. i have one very minor quibble, which is that it’s a bit inelegant to hide the letters of NEVER in NO LEAVE EVER. but that’s a very small complaint.

the grid, of course, is extra-large to accommodate all that theme. at 20×19, it’s quite an unusual size, but the width has to be even because of the presence of the even-length THE BLACK KEYS in the middle. i thought the whole grid was very smooth. AQUA crossing SEA BREEZE in the southwest was a lovely little whiff of caribbean beach air.

that’s all i’ve got this week. looking forward to week 5—it feels like it’s been a while since we’ve had a 5-meta month. how’d you all like this one?