Intriguing theme today. We have a CAT BURGLAR in our midst (62a, [Person who’s inexplicably struck four clues in this puzzle, rather than their answers]). Yet the high value items in the theme answers are completely untouched. However, the “cat”s in their clues have mysteriously vanished. 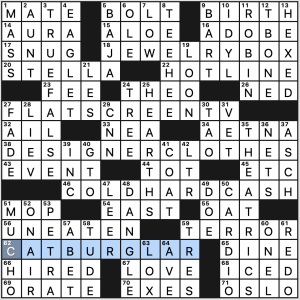 My initial reaction on seeing the first entry was bafflement. But that didn’t last very long. Once I realized the brackets should have “cat” in them, the rest of the clues became rather pedestrian. So on that point, the gimmick didn’t quite pay off.

And having the “cat”s come from the clues rather than the theme entries themselves almost feels—I hate to say it—like a cheat. It’s a lot harder to come up with interesting theme entries that are still valid phrases after three letters are removed, than it is to just replace letters in clues with brackets.

But I felt the theme redeemed itself somewhat when I realized there was a connection between the actual entries, i.e. that they are all valuable items a thief might steal. And the fact that said thief ignored them and went for the “cat”s is kinda cute. Must be a real cat lover!

And lastly, the title is just right. I wonder if constructor or editor considered “Purrloined,” but maybe that would’ve given too much away.

So I’m thumbs-up on the theme. What else we got? TRUE/FALSE, THEATRICS, HEARTHS, DANGLE, TEE-HEE, HOTLINE. Not bad at all. ASCH {Yiddish author Sholem} was tough for me. Seems like that would be standard croswordese, but I don’t recall ever seeing it before. PETRA [Ancient city in Jordan] required most of the crosses as well.

A lot of dudes in this grid: THEO, NED, BART (these last two without a Simpsons clue!), ROBIN (the superhero), LES, LIEV, and ASCH. And only STELLA as their counter (and not even clued as a real person’s name). It would be nice if constructors strived for a little balance, at least in the cluing. For example, ROBIN could’ve easily referred to Givens, Roberts, or Wright.

In the end, this was a cute theme with plenty of solid fill. 3.75 stars.

Today’s NYT is from Tracy Bennett and it’s a little underwhelming:

That’s it!  That’s the theme.  Two TV show titles, placed next to one another to form phrases.  I’d be fine with this in the context of a bunch of others on a Sunday-sized grid, but there’s something about a normal 15×15 grid with just this that feels out of the ordinary for the NYT, especially on a Thursday, which tends to be a little more out-there/gimmick-y.  This could have played just fine on a Wednesday, but felt weirdly like a letdown when it popped up today.  Does it PASS MUSTER?  I guess, but it’s a little more ORTHODOX than I expected.

As long as we’re talking TV, if you need a new show and like British panel shows, might I suggest catching up on Taskmaster? Each season features 5 comedians being led through a series of challenges like the above “conceal a pineapple on your person”.

OK, I’ll stop pointing out that a man constructed the Fireball. At this point it’s pretty much like saying “water is wet.”

This one took me a while, maybe because it’s morning and I’m not fully awake, but mostly because the trick is a bit complicated. It’s also original and fun – my favorite FB for quite some time. I figured out that there was a rebus pretty quickly from the Across answers. It took me a bit to figure out what was going on with the Downs. 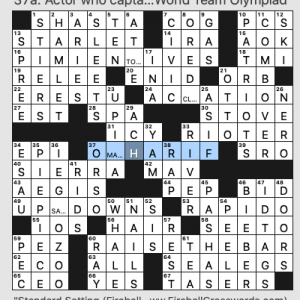 I couldn’t figure out what the title had to do with anything until I got to 60a [Increase standards … or what you’ll need to do four times to complete this puzzle], RAISE THE BAR. TOOL BAR, CLAM BAR, MARS BAR, SAND BAR. Excellent.

Almost time for work, so I’ll skip to “what I didn’t know before I did this puzzle:” that ENID Blyton is  fourth on UNESCO’s list of most translated authors (didn’t know the list existed), that R E LEE won the Pulitzer Prize for Biography in 1935 (written by Douglas Southall Freeman), or that Justin BIEBER is the only solo artist to have five #1 albums before turning 19. Pretty sure my daughter would know that last one.

I’ve been interviewing a lot of high school seniors for a graduation video lately, and so many have said that they’ve been spending their quarantine time working out. This puzzle was a reminder that I should start that too. Instead, over the past months, I’ve discovered ice cream.

THEME: Phrases that end with types of workouts. 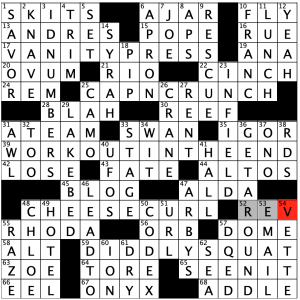 These was a really fun puzzle and a joy to solve. Excellent aha moment after hitting the revealer halfway through, especially since I was wondering what CRUNCH and PRESS had to do with the title Strong Finish during the first part of the solve. You can always count on Evan Kalish’s puzzles to be extremely tight in concept and cleanly filled. This one is certainly no exception.

Nice clue for 52A [Race at a red light?] REV. That’s when one would “race” an engine if they’re about to tear off! I didn’t know [Actress Sevigny or Moretz] or [Actress Saldana or Kazan], and they cross each other, which would normally be a no-no, but CHL?E crossing Z?E… what else could it be? So no harm done.

Automatically entered ESC for [PC key near the space bar]. Then I remembered there’s that ALT key that I’ve used about twice in my life.

Awesome start to the day! 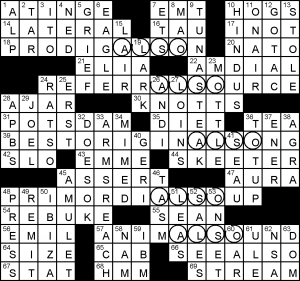 I saw “SO…” in the last word of all the theme answers while solving. Nevertheless, the complete connection remained quite obscure for a time after solving, even with the revealer, SEEALSO. Turns out you need to SEE the four letters >ALSO<, as circled. Hiding the same tetragram five times tends to result in scraping the barrel for answers. This explains jargony REFERRALSOURCE and ANIMALSOUND. PRIMORDIALSOUP and BESTORIGINALSONG are top drawer, on the other hand. With such limited scope, four answers may have worked better?

Quit a few bottom of the barrel shorter answers today too: TASM, ENER in the not much in actual use abbr. category; INOT, GOTAC, DOESOK in the handrolled phrase category. Not sure you want to have more than one of those in the entire puzzle. Hope everyone survived EMME/GERI, but I don’t think any other vowel was plausible? 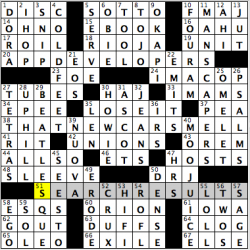 Hello everyone. I hope you are doing well.

Apologies for the late post, but it is next to impossible for me at the moment to be in the right headspace at the moment, with the goings-on in America on the subject of the devaluating of black and brown lives at the hands of the justice system, the latest highlights of which crescendoing with the murdering of George Floyd in Minneapolis. Almost at any other time, seeing I’M A COP (24A: [Words said while flashing one’s badge]) would make think of something more light-hearted, like when the line “I am a cop” was uttered by RoboCop in the original movie. Instead, seeing that entry, along with my thoughts already being occupied by the latest egregious act of an extrajudicial killing of a person of color under questionable circumstances, can’t make me think anything too much more other than the exhaustion that I’m feeling. Before people see that I’m a crossword blogger or journalist or teacher, people see that I’m a black in America —. and enough people see that as a threat. And I’ve been subjected to the indignity of having a person describe my presence in a non-threatening situation being cause for this person to “not feel safe.” (This literally happened on my birthday in 2018.) The subsequent action usually taken from these feelings of perceived angst based of stereotypes automatically puts me and other people of color in mortal danger. That is no stretch. However uncomfortable this is for you in reading this in a space reserved for crossword chatter, that discomfort pales in comparison to the fear and anger that so many black people feel about systemic injustice that has led to discrimination in so many fields (e.g. housing, employment, health care, criminal justice) and dead bodies on the ground in actual fields.

Apologies for the inelegant segue, but want to just take you through the theme of today’s grid, which takes the last names of famous CEOs and reimagines them as actual nouns relating to the companies that they headed.

Pretty much done with words for the day. I really do thank you for the time on here, and I’ll see you next week.