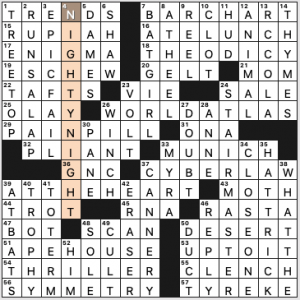 “NIGHTY-NIGHT” is a mighty compelling entry at 11 pm, isn’t it? It sure is. My plight is that I can focus on pretty much anything except this crossword blog right now. Let me make a slight effort and fight through this before lights out.

Fave fill: I tell ya, as far as international currencies go, RUPIAH is among the coolest-looking words. I always like an ESCHEW but wanted this entry to be ESCHER when I had the first 5 letters. Most kids today may never know the nerdy joy of leafing through a WORLD ATLAS for fun. BATGIRL is good. The STAIRMASTER has been shunted aside by other brands of step machines but I feel like it’s the Kleenex or Xerox of its category. “CLOSE ONE!”, whew.

Name I did not know: 57a. [Evans who was the 2009-10 N.B.A. Rookie of the Year], TYREKE. Was booted out of the NBA last year because of drug use, can apply for reinstatement to the league after two years.

Vocab word I never, ever remember the meaning of: 18a. [Explanation for the existence of evil in God’s presence], THEODICY. The atheist’s explanation is simpler.

Four stars from me. Nighty-night! 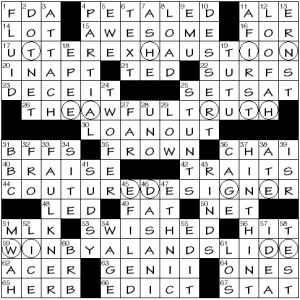 Left-right symmetry on this one. Each themer clue contains a word that is idiomatically ‘separated’ which in the answer is literally separated, as highlighted by the circled squares:

I realize some editors are unconcerned by duplications, but when it rises above triviality and is easily averted, it seems to be there should be no excuse for such distracting inelegance. This crossword has 40a [Cook in fat in a closed pot] BRAISE and 49a [Spare tire makeup] FAT. I never know whether to ascribe it to indifference or sloppiness, but it’s certainly disruptive to this solver. Duplication in-grid is seen with 50a [Hoops hanger] NET and 2d [ISP suffix] DOT NET, in which NET is abbreviated from network, a compound of net + work.

Contrast those with 15a [“Killer, dude!”] AWESOME, which duplicates the root word in AWFUL in 26a—I would have preferred this, too, was avoided, but I don’t find it quite as transgressive.

I loved this puzzle. 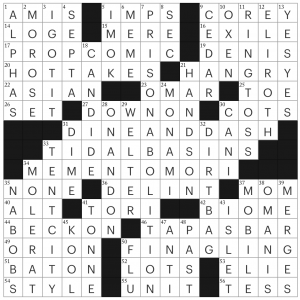 To get right to the heavy stuff, I think the central entry of PRISON ABOLITION feels particularly apt today, as we are flooded with images of the natural result of the structural violence our current carceral system inflicts against black and brown people in this country. I’m grateful to Natan for highlighting this [Cause for Angela Davis and Ruth Wilson Gilmore], and I’ll save my HOT TAKES on the righteous uprisings against police brutality for another day. Also filed under “heavy stuff”: TENT CITY, clued here as “Many a Palestinian encampment post-1948 expulsion.” YUP.

It’s a little tonally challenging to transition from that to the less-heavy stuff, but here we go: the central staircase! It’s great. I’m a little miffed because *I* am building a puzzle around DINE AND DASH right now, but I suppose there’s enough dining and dashing to go around. I really liked TIDAL BASINS as well, and although I had never heard of MEMENTO MORI, it’s pretty clear what it means, and it’s awesome. Other excellent long entries include FINAGLING and PROP COMIC, the latter of which had my favorite clue of the day [One who has a thing for jokes?]. I also lol’d at the clue on OMANIS [Muscat-eers?].

Overall, pretty much all the stars from me. No bad fill, lots of strong entries, A+ wordplay. So good!!!

P.S. Thanks to pannonica for filling in for me on Monday!

P.P.S. The NYT has converted its Sunday Travel section into a Sunday “At Home” section, and will be running 3 minis and a midi each week. Soooo if you want to see my print NYT debut, look for my midi there this weekend!

Theme: The title says it all. Each theme entry has four Gs. 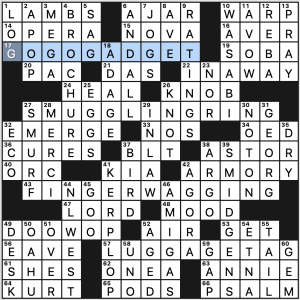 Simple and clean with fun entries.

I’m loving KER-PLOP, SMIDGENS, DOO-WOP, and WASABI in the fill. BROCHURE ain’t half bad either. Nothing to grumble about too much beyond the partial NOT ON.

There’s a definite and welcome positive vibe in the fill and clues: See [Gentle souls] for LAMBS, [Become well] for HEAL, CURES, ANNIE singing “Tomorrow”, [“Eat ___ Love”] for PRAY, [“Love conquers all,” for example], MERCI, AMIGAS, and [“___ the Rainbow”] for OVER. In these days of sickness, pain, and violence, even words of peace from a crossword can be healing. This was much appreciated by me.

One clue I’ll note: 61a. [“I’ll have what ___ having”]. SHE’S. From that memorable When Harry Met Sally scene. Did you know that the woman speaking the classic line was director Rob Reiner’s mother?

The “OVER the Rainbow” clue which immediately followed OAHU can’t help but bring to mind the classic version of the song by IZ. I’ve heard it countless times but never saw the video. It seems like a hopeful aid in dark times.