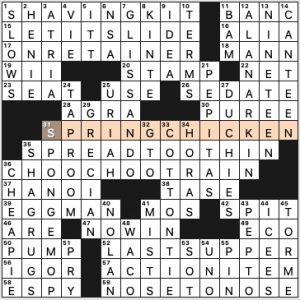 Lots of colorful long fill here, with stacked 10s and 13s. Among those I liked most: LET IT SLIDE, SPREAD TOO THIN, CHOO-CHOO TRAIN, LAST SUPPER, pretty GLISSANDO, ALAN ARKIN.

And wow, this is a dudely crossword. Representing the men’s side, we have: a men’s SHAVING KIT; Horace MANN (could’ve been Aimee); fictional EGGMAN; Tyler, the Creator in the IGOR clue; Edward Snowden; Roots character Kunta KINTE; ALAN ARKIN; biblical David and URIAH; baseball’s NOLAN Arenado (never heard of him before); Mel TORME.

For the women, we have only ALIA Shawkat, biblical Bathsheba, and Sonja HENIE. Now, along with a MANN switch, ESPY could have been clued as the Espy award, via a woman who’s won it, but the fill and clues would still be heavily weighted towards men. #representation matters

A bunch of themers in this puzzle feature workers who should quit their day jobs!

THEME: Phrases that start with careers unrelated to the rest of the phrase. 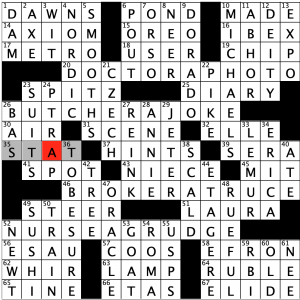 I feel like Universal has had a few mismatched career themes! However, there’s a certain tightness to this one that makes it feel unique. The CAREER + A+ NOUN WHICH HAS NOTHING TO DO WITH CAREER makes for a very focused theme.

That being said, NURSE A GRUDGE feels strange. HARBOR A GRUDGE sounds more natural to me. Probably also because I think NURSE A DRINK really, really wants to be in there.

I’m also curious why the clue for AXE thought a var. was necessary. Typically, var. clues are eyeroll inducing because it indicates a wacky, archaic spelling is going to be the result. But tbh, I think AXE looks more familiar than AX. I don’t think of either spelling as deserving of a var. any more than BUSES/BUSSES. Could be just me though.

***Looks like this may be a debut! Congrats, Geoff! Well done! 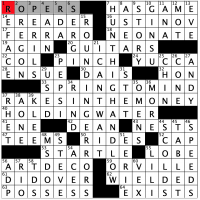 Another rapid solve for the LAT. It is a good sign for the upcoming rescheduled ACPT, but I am with others in the belief that this still isn’t happening. And if so, I don’t know if DEREK will be there. As much as I love going, I, like many others, have immune system issues, so we shall see. At the very least, I will solve online, as I did for 20 years in the ’90s and ’00s!

Anyway, I digress. Brian has a fun puzzle for this weekend. There is a great wide-open center with stacked entries ranging from 9 to 15 letters. Even though my solve was fast, this gave a little pushback, but I remember having lots of satisfying solves as I worked my way through this one. 4.2 stars today.

See you next month! (That’s a mini-joke!) 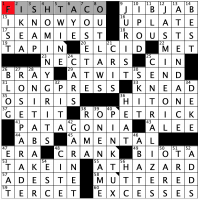 This wasn’t too bad! I have said that for the past few Greg Johnson Stumpers, so maybe I am getting used to how he constructs. The left half of the grid was filled in rather quickly, then I slowed down for quite a bit, with the SE corner being the last to fall. Nothing too difficult, but there is some usual Stumper vagueness and a stretch or two. In the all, it is all fair. A solid 4.4 stars for this one.

Everyone have a safe and healthy weekend! See you next month!

Quick recap today since I’m so late to the scene. Our theme entries are phrases that have a single added letter A-G in order. Going by the title, these are musical notes and they all follow the letters IT in the phrase. 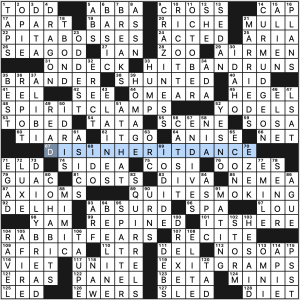 Really tight constraints on this theme and impressive execution. Nothing feels overly forced, and while I didn’t lol, there’s certainly humor here. And the title gives a perfect explanation for the mechanism. Nice job.

Fill highlights: CURMUDGEON, MARRIEDS (as a noun), DAILY BREAD, SQUIRRELS, BEELINE, RICOTTA, OCTOBER, DREXEL. My only trouble spot was the crossing of S_ATTER [Paint à la Pollock] and RE_INED [Fretted]. I wanted SCATTER at first and then SMATTER (for some reason). Having never heard of REPINED didn’t help matters.

Tightly executed theme and strong fill. Four stars from me.