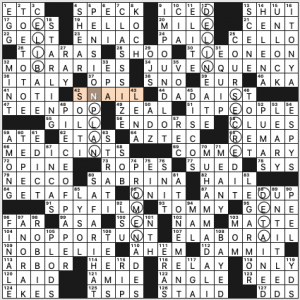 The theme entries turn up at the circled/shaded letters and then turn around to come back down and return to the rest of the Across space, meaning each themer contains a 7- or 9-letter palindromic string:

Neat trick, but this is one of those themes with no potential for entertainment or humor. Right now I’m missing Merl Reagle, who had so many funny themes in his 21×21 puzzles.

There’s a smattering of interesting longer fill in the grid: PIECE OF PAPER clued as [What marriage merely is, to some] (sometimes you need that piece of paper to get added to your sweetie’s health insurance policy, though, because this country is still mired in that weird system). GET A FLAT tire. Plato’s NOBLE LIE. DAMMIT! PENSION PLAN (note that most of the current financial crunch at the USPS is because of a misguided 2006 law Congress passed regarding funding of pensions). School CLASS SIZE, certainly a concern to parents as well as to the teachers cited in the clue. The great MUHAMMAD ALI. The dreaded IMPOUND LOT. And UNTITLED with a nice poetry clue, [Like most haikus].

Haven’t got much else to say, and my dinner will arrive any minute now. 3.5 stars from me.

Today’s theme is a cousin of Tom Swifties. Each theme answer is a phrase describing something that didn’t go well. The wordplay is in the clues.

I liked it! The clues are funny, all the phrases are solid, and it was enjoyable to solve. I tried to figure out the answers with as few crossings as possible to test my pun IQ. Not too shabby. 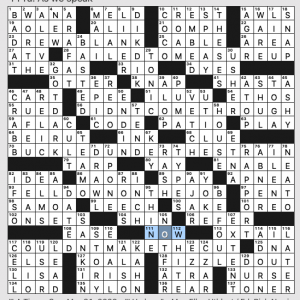 What I didn’t know before I did this puzzle: that ILENE Woods was the original voice of Disney’s Cinderella. 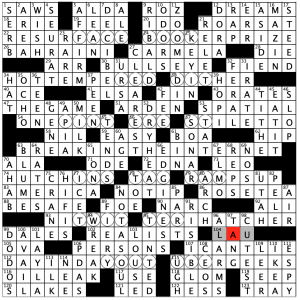 After last week’s knuckle ball, Evan pitches Crossworld something a little more over the plate this week. A fun, clean, well executed puzzle with an accessible, albeit familiar, theme.

A couple notable things about the execution: 1) The entire row contains at least part of each of the theme answers 2) The sounds are extremely well hidden. That is, you don’t necessarily hear TWIT when you say NITWIT, or YOU in DAY IN DAY OUT.

WaPo does have a tendency to introduce new and noteworthy names. New for me this week were Amelia HUTCHINS (inferable), Henry LAU, Myra HESS, and Craig MAZIN.

Newer solvers may balk at the clue for ALI [Athlete whose name is written in Balinese?]. ALI‘s name is can be found in the word “bALInese”… I never grow tired of the cryptic style clues! Also, I didn’t know “Balinese” was a word, and Bahraini is quite new as well! (I initially wanted Bahrainian or Bahrainan).

What I stumbled on most is RISIBLE for [Provoking laughter]. That’s a completely new word for me. Not even sure how to pronounce it!

Thanks for this one! Enjoy Sunday.

Theme: PROs are changed to CONs (and vice versa) in common phrases. 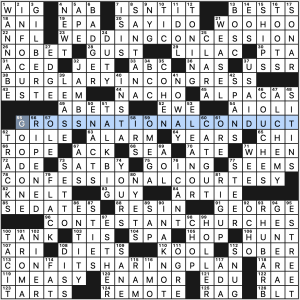 Evenly balanced theme and solid execution. Since I have no other nits to pick, I’ll comment that it might have been more interesting if the pros and cons were interweaved rather than having all the cons first and then the pros. But that’s a minor thing.

It’s hard to do a puzzle today without seeing it through the prism of national events. And so entries like SIT-INS [Certain civil rights protests], SAT BY [Did nothing], KNELT, and even GROSS NATIONAL CONDUCT (i.e. systemic racism) struck a chord with me.  All I can say is it is incumbent upon us all to be kind. Be kind to everyone, everywhere, all the time. And vote. From the top of the ticket to your local elections. Vote for equity, fairness, justice, and kindness.