Team Fiend’s own Erik “Slicks” Agard has today’s puzzle, and it’s a good ’un. Smooth as silk for a Monday, with a theme that’s straightforward and still interesting.

Each theme answer has a different pronoun. 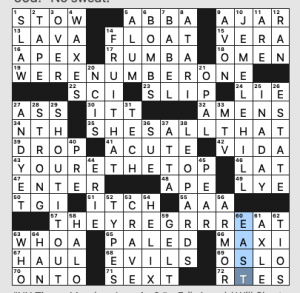 Monday-accessible and fun for us crossword nerds, too. Thanks, Erik!

Howard pointed out in comments that each theme entry ends with a synonym for GRRREAT, which makes the theme even better and 57a a sneaky revealer. Love it. Thanks, Howard!

What I didn’t know before I did this puzzle: that JEMELE HILL has moved from EPSN to The Atlantic.

We have a WSJ debut today, so congrats are in order!

Do you have a burning question today? Like, “What should I do if I’m burning?” Well, this puzzle is here to help. 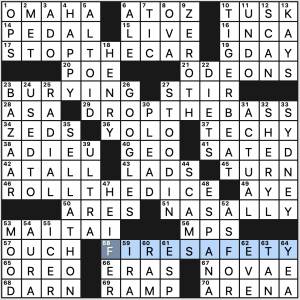 I love the consistency here where each phrase is of the same form and each of those reflects the title. It’s a little weird not having the phrase in its entirety (“stop, drop, and roll”), but I think it works fine as is.

Strong fill, especially with GOOGLES, BAZAAR, SYDNEY, ESPAÑA, SELLATHON, and TIGER BEAT [Teen fan magazine that went online-only in 2018]. My sister used to read that way back when. Can’t believe it’s still around.

In the eyebrow-raising category, there’s only one entry, but it’s a doozy: ZEROTH [It comes before first, in mathematics]. I will take your word for it, puzzle. It’s new to me, but then I wasn’t a math major. Despite that, it makes for a fun entry.

All in all, a simple theme, but a good start to the week with plenty of fun, sparkly fill. I expect we will see a lot more from this constructor (based on this and previous NYT outings). Looking forward to it. 3.8 stars. 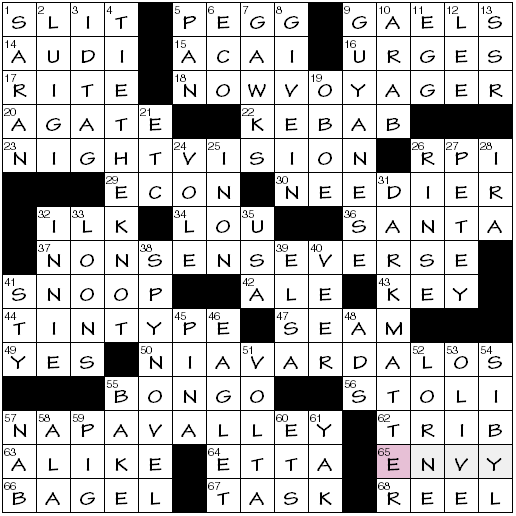 Nothing to do with green in the sense of ECO-tourism (6d). No, cast your eyes further down, over in the southeast corner of the grid: 65a [Deadly sin that’s a hint to the starred answers’ “initials”] ENVY, i.e., N-V.

And that’s all she wrote.

*Do not for a moment think I don’t know that moles are not rodents.

This puzzle is so cool looking and satisfyingly crunchy! I’m a little bummed that I got stuck on so many proper noun crossings though– I added probably 3 minutes to my solve trying to figure out my errors (and there were several) at crossings of names I just didn’t know. 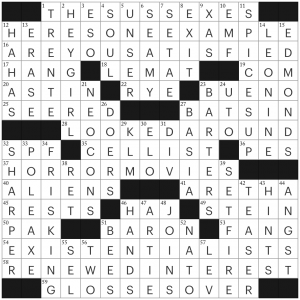 But the long stuff! It’s so joyous! THE SUSSEXES, HERE’S ONE EXAMPLE, ARE YOU SATISFIED, EXISTENTIALISTS, RENEWED INTEREST, GLOSSES OVER. All really fun to crack, and I’m telling you, nothing beats the satisfaction of throwing in the letters for a grid-spanner.

The proper noun crossings/”nearings”(™) that tripped me up were:

Favorite clue: More to the point? for SHARPER

Despite the somewhat frustrating hunt for errors at the end, I really liked this puzzle and enjoyed the solve. Most of the stars from me!

ps. Today’s USA Today is a meta puzzle in celebration of Pride month that I wrote with Erik Agard. Check it out! And if you like it, donate to a bail fund! Pride is intersectional and recognizes that the liberation of LGBTQ+ folks is bound up with the liberation of all oppressed people. 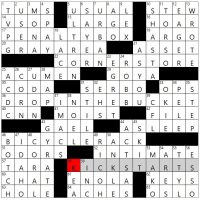 17A: PENALTY BOX [Where hockey punishments are served]
22A: CORNER STORE [Local retailer]
36A: DROP IN THE BUCKET [Insignificant amount]
46A: BICYCLE RACK [Car rooftop attachment for a Schwinn]
58A: KICKSTARTS [Reinvigorates, as an economy … or a hint to the beginnings of the answers to the starred clues]

Sorry for my delayed reply! It’s been quite the week and it’s all I can do to think about anything other than the most pressing matters at hand. (And I’m healthy thankfully!)

In this, the year 2020, we are apparently still referring neutrally to plantations like TARA without mentioning the brutal history of slavery and everything that came with it. That our nation and economy would be nothing if it weren’t for those systematically oppressed on plantations. That we have done nothing to atone for 400 years of treating Black people as less than – and that’s putting it nicely. Constructors and editors: if you’re going to mention plantations, there’s no neutrality. Black lives matter too much for this.

Each of today’s themers starts with a type of kick, hence KICKSTARTS: penalty kick, corner kick, dropkick (!), bicycle kick. Three of these are soccer moves. One of them is violent.

Also, with all the talk of Republicans trying to “kickstart the economy” by sacrificing citizens to COVID to benefit their own bank accounts, the clue for the revealer felt tone deaf to the current moment.

Apologies to Jesse Goldberg for my delayed review of this puzzle. A few different clues (which may have been you or the editor) and this puzzle would have been much more enjoyable.