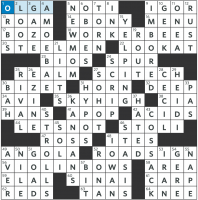 I solved with Jesse and we had some trouble identifying the themers at first, but settled on this set of five:

We thought that both STEEL MEN and VIOLIN BOWS seemed kinda roll-your-own, so they were likely part of the theme mechanism. We both pondered these separately at several hundred miles’ remove, and then Jesse send me a text:

Aha! Breakthrough! We were then able to suss out the entire set, along the principle of: take the final sound off (per the title) of each themer and match it with another entry:

Then, step two: We applied the same principle to the second set, taking the final sound off (i.e. the sound that you add to the original themers to generate those entries) like so:

… which is a five-letter word, and our answer. That was pretty fun, but I suspect it will play pretty tough for most solvers. What’d you think?