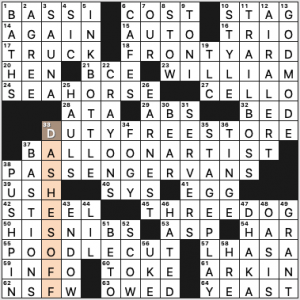 I’m just not finding any crosswordy words tonight. DASHES OFF ([Writes quickly]) is exactly what I’m not doing here.

Couple things were out of my wheelhouse: 17a. [Skateboard piece that connects the wheels to the deck], TRUCK. I had a skateboard around 1979, but it probably came from Sears and there was no relevant terminology to know. 13d. [State of invincibility enabled by a cheat code], GOD MODE. Kinda ballsy to not even include “in a video game” in this clue, isn’t it? Must’ve been nonsensical to a lot of solvers.

Liked the clue for WILL.I.AM, 23a. [2000s music star who writes his name with four dots]. With lowercase, that’s Will.i.am, two periods and two tittles on the i’s.

Reckon I’ll just move along and get ready for BED (32a. [It has four legs and a head]). 3.5 stars from me, standard Friday difficulty. How’d you like the puzzle? 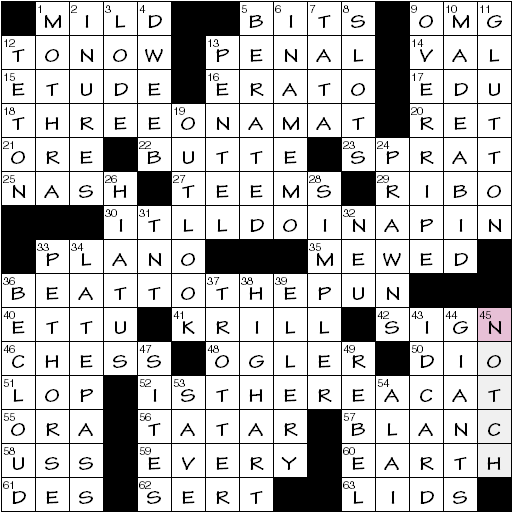 The revealer at 45-down is potentially ambiguous: [V-shaped cut … or, in two parts, a hint to four long puzzle answers] NOTCH. Setting aside the superficial confusion resolving a NOTCH and something being cut in two, there’s the question of where to parse the division. In most crosswords with a theme in this vein it’d be NO + x. Here that would be NO TCH, but in fact what we need is NOT CH.

Accordingly, the four referenced entries—in their original, non-wacky versions—end in -CH. However, to muddy the waters, two of them (including the first overall) end in -TCH.

Confusion aside, the themers are all rather good and entertaining.

And just because I can’t let go of the -tch thing, here’s the etymology of TCHOTCHKE: Yiddish tshatshke trinket, from obsolete Polish czaczko.

The Inkubator kicks off Pride Month with an Email reminder that Stonewall was a riot kicked off by trans women of color protesting police brutality. 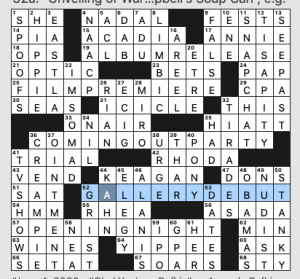 There’s a central revealer that ties it all together: 36a [Celebration intended as an introduction to society, and a hint to the starred answers]: COMING–OUT PARTY. Each of the artists in the theme clues is a member of the LGBTQ community. We’ve come a long way from Oscar Wilde – and we still have a long way to go.

This is a message puzzle, and the Email spells that out: “And to anyone reading this who may be struggling with the subject matter of this puzzle, please feel free to reach out if you need an ear. Find Amanda on Twitter at @amandarafkin”

Once again, the Inkubator crew shows us that crosswords can be part of the fight for social justice without compromising the quality of the puzzle.

What I didn’t know before I did this puzzle: never heard of Lena Waithe , Carrie KEAGAN, or RHEA Butcher. Also did not know that SNAPCHAT has “Ghostface Chillah” as a mascot in homage to “Ghostface Killah” of the Wu-Tang Clan.

It’s FRIDAY folks, and we have an Erik Agard puzzle to kick off the weekend, so at least there’s that! Erik has been doing some cool experimentation around L/R grid symmetry lately, and that is on full display here, where we have an innovative grid pattern that I’ve never seen before. 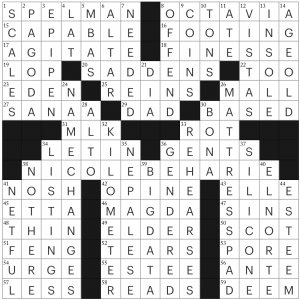 This puzzle does a fantastic job of highlighting black women, including ELLE Duncan, OCTAVIA Butler in the top row (along with SPELMAN College), and the marquee entry for this puzzle (insofar as it has one, given the L/R symmetry!), NICOLE BEHARIE.  I didn’t know ELLE Duncan or NICOLE BEHARIE, but both were entirely gettable from perfectly fair crosses. I hadn’t realized that in addition to 42 and Sleepy Hollow, NICOLE BEHARIE is also in the Hulu series Little Fires Everywhere.

Other timely entries include AGITATE [Stage a protest, for example] and the MLK quote [He wrote about “a positive peace which is the presence of justice,” for short]. I appreciate the nuance on the clue for NAME CHANGES [Parts of some transitions], which recognizes that while NAME CHANGES can be an important and affirming part of gender transition, they aren’t necessarily important for everyone who transitions.

Overall, tons of stars for this puzzle, which was also possibly my fastest New Yorker solve ever? Top five, for sure.

Theme: Three “Me”s in the title, three “me” sounds (pluralized) tacked on to the ends of various phrases. In a move toward consistency, each sound is added to a three-letter word ending in -AM. 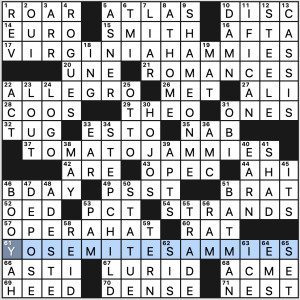 Cute theme. What is it about adding the “me” sound to the end of a word that makes it cute? See: Mommy, gummy, tummy, Jimmy. ?

Ooh, hey, I just noticed the dupe at 9d SHAME ON ME. It’s probably not ideal to have this in there when the whole theme is based on “me,” but the fact that I didn’t noticed until now means it might just be okay. Plus, it’s a really fun entry. And just maybe it’s a tongue-in-cheek meta reference by the constructor for putting in a dupe. Other goodies: ROGUES, “IF I CAN,” ROMANCES, ALLEGRO, “BOOYAH!,” BATMAN, and OPERA HAT.