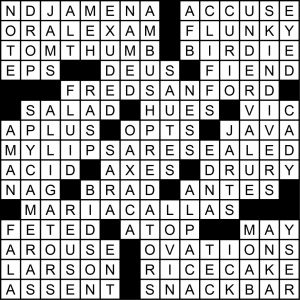 Decades of scouring atlases and now Google Earth for fun made 1a. a gimme today. [Capital of Chad] was N’DJAMENA, although I did have to check just now to be sure the apostrophe was in there (not that it mattered for the crossword itself). Rest of the upper-left fell quickly after that, since 15a. [Face-to-face challenge] seemed to be (and was) ORAL EXAM.

But then I had AMB???????????? for the central down, clued as [Leopards and anacondas, e.g.]. Turned out to be AMBUSH PREDATORS, which sounds cool but is a phrase I didn’t know. Makes sense, but doesn’t Google that great so not that thrilled with it. The other grid-spanner was a nice entry, the central across 34a. [“I’ll never tell”], MY LIPS ARE SEALED.

Coasted down through the center, but took a long time to finally see [’70s sitcom title role] from ?RED?AN????. Figured it was Fred and kept trying to think of famous Fred characters of that era, but the “title” part was the last name, (FRED) SANFORD. Great theme song to that show, written by Quincy Jones.

So much fun stuff in the rest of the grid: RICE CAKE, SNACKBAR, ALLIGATORS, SPY CAMERAS, FLUNKY, BIRDIE, MARIA CALLAS, and OAXACA. A person from which is called a oaxaqueño/a, which is just an awesome word.

Clues that tricked me: [Bar assembly] for SALAD, [Ruby and sapphire] yielding not GEMS but HUES, and [Long faces?] for CLIFFS.

And of course we must note Doug’s tribute to this site, [Devotee] for FIEND at 22a. 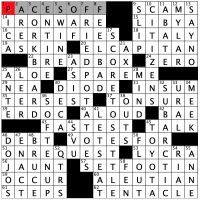 I am used to Greg making Stumpers! Now that I think of it, he may have done one or two other Saturday LAT puzzles that I have blogged. This one wasn’t near as hard as a Stumper, but I’ll bet with some clueing changes it could get much more thornier that it is. I usually am on Greg’s wavelength when he constructs a Stumper, and this puzzle also felt quite smooth during the solve. Word count is 68 on this one, and with practically nothing obscure, that shows great setting skills. Nice job! 4.3 stars.

That is all! My next LAT writeup is on the 9th. See you then! 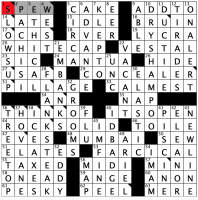 This one was tough. As you can see, I readily used the check option on this one, but I wasn’t in a position to really sweat over this one, so I had to see where I was headed in the wrong direction. In reality, I thought there would be a lot MORE error marks in there! If you were looking for a classic Stumper challenge this week, I’m fairly certain you were not disappointed. I am pretty sure I learned a new word or two! Solid puzzle, Brad! 4.4 stars. 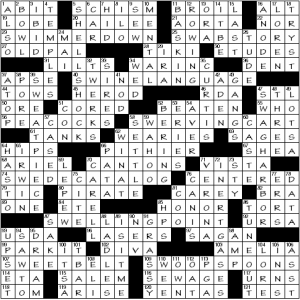 Not much time this morning, so I’ll be PITHIER (66a [Less long-winded]) than usual and perform a quick run-through to see what jumps out:

The fun for this one is in the clues!

THEME: Common phrases having to do with “switching” are literally depicted in the clues. 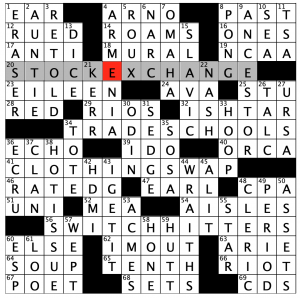 This one was fun! I really like it when the clues play a more active role in the theme solve. It makes for a synergy that often feels unique. If I had me druthers, I would’ve swapped the first and last theme answers’ position in the grid since, for me, the first was the hardest of the bunch to interpret.

Just fine on the fill! Has anyone actually seen ISHTAR? If so, is it really as bad as they say? Never knew that “Come on EILEEN” was by the band Dexys Midnight Runners! Never even heard of them, but of course that song is an earworm right now!

Great clue on 11D [Org. hidden in “airport safety”] TSA. Universal likes to sneak in about one of these style of clues per puzzle on average! I always enjoy them.