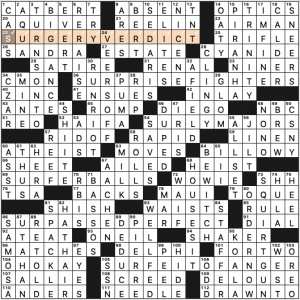 “Surplus” means extra, and if you add (“plus”) SUR- to the beginning of familiar phrases, tweaking the spelling as needed to yield a new first word, you get Andy’s theme:

The theme is executed well and the title works perfectly.

There’s some really nice fill here, too: a BILLOWY dress, the sportsy BIG DANCE, SPACKLE (just a fun word), HAT HAIR, David SEDARIS, “ORDER NOW!,” and SQUIRT GUN. Squirt guns have recently been pressed into action by priests looking for a contact-free way to drop a holy water blessing on someone. Babies have even been baptized via squirt gun during this pandemic, I kid you not.

Happy to say I mowed my lawn yesterday prior to solving this puzzle, so that added to the satisfaction. 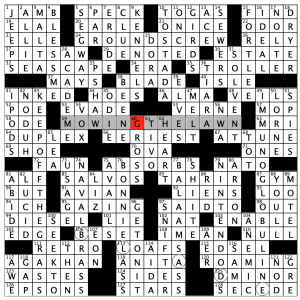 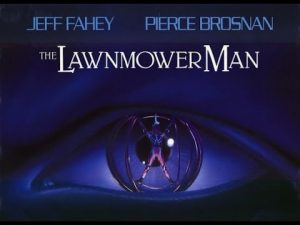 This is a quirky puzzle. The theme is more visual than anything with the clever cutting of a blade of GRASS. So it’s much more dense in the south, and notably more difficult down there fill-wise as well since there are more constraints.

I caught on very quick, needing no crosses for KEEP OFF THE GRASS and BLADE. The clue for BLADE told me what to do with the circled letters, and then it became very clear what to do with the green shaded boxes (which, as the note tells us, do not appear in Acrosslite, but I had taken a sneak peak at the PDF prior to solving). So the AHA moment for me was fun, but over quickly, leaving me mostly to fill.

I got very hung up in the FAUN/SALVOS/NAVAL/GAZING area. Though in retrospect, I’m not sure why. IMMUNOGLOBULINE was a head scratcher as well, mostly because I really thought it was going to be grass related.

Really liked the concept, but I wish it were a slower burn.

THEME: Meta- All theme clues are self referential. 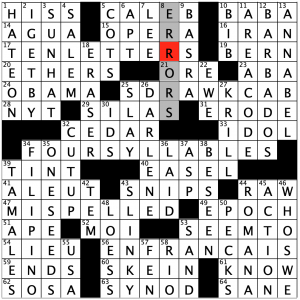 Hey, this was fun! I like how each of the themers revealed itself differently. It was exciting to try to figure out. I was really stuck on the BACKWARDS entry, and kept checking my crosses to try to figure out what I had wrong. I didn’t know who DARLENE Love was, but figured it had to be either DARLENE or MARLENE. Finally, a solid AHA moment when I realized what was happening there.

Good cluing and fill all around:

I got stuck in one more area because I really wanted TOP SEED instead of ONE SEED and I was okay with SHREDding credit cards rather than CUTting them UP!

On a day when we have attorney Andy Kravis in the NYT, we get legalese in the LAT. Each theme answer is a common phrase clued as if it literally applied to a legal issue. 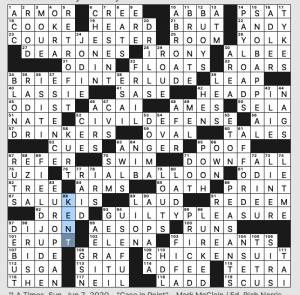 While I generally prefer my wordplay in the grid rather than the clues, this one was a lot of fun. It’s perfectly pitched for a sunny Sunday morning.

What I could have done without: the appearance of MEL Gibson. He’s managed to rehabilitate himself in Hollywood, but not with me. He’s an unrepentant misogynist, racist, anti-semitic asshole. Why not MEL Brooks? or MEL Harris? Or the owner of the diner where Alice and Flo worked? If I can think of three alternate clues off the top of my head, surely the constructor and editor could have come up with at least one.

What I didn’t know before I did this puzzle: that Vishnu has four ARMS, that there’s a HEAD PIN (is that one word or two) in bowling, and that the Iowa State athletes are called the Cyclones.

“Ease” for me would be under 10 minutes, so I couldn’t say I did this puzzle with ease, but it wasn’t too challenging and the themers were quite enjoyable. Our constructors took phrases that they could tack the sound “eez” onto and made a puzzle out of them. The highlight of the theme for me is the variety of ways that sound is produced. 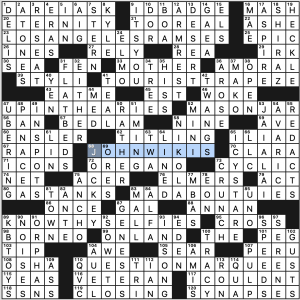 Overall, a fun set. If there’s one nit to pick, it’s that the “eez” sound is an essential part of the new words in the first three answers, but it’s only a tacked on plural in the last four. That is, those last four would still be valid crossword entries if they were made singular, thus making them less elegant. But that didn’t detract from the enjoyment of the solve since they all seemed to flow naturally.

Great start to the grid with “DARE I ASK?” at 1a. ETERNITY right below it ain’t half bad either. Other goodies: TOO REAL, FLATBEDS, MASON JAR, GAS TANKS, ICY STARE, PANACEA, BORNEO, ARMREST, AVARICE, OREGANO, JOCKEY, KB TOYS (who else tried to squeeze TOYS R US in there?), SOWETO, BEDLAM, and “I COULDN’T.” Lots to like there. In the less-to-like category are IMING, IN SONG, and UBERING since I don’t know that people use “Uber” as a verb, do they? (I usually hear “took an Uber” as opposed to “Ubered,” but maybe that’s just me.) Also, I did notice the “eez” sound in GENESES.

Clues were mostly straight over the plate, so I’ll leave it there. Fun puzzle with lots of sparkly fill. Four stars.