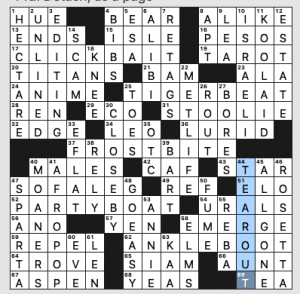 The sounds go in order: A,E,I,O,U. It’s a solid, serviceable, well-executed Monday theme. If that sounds like faint praise, I apologize. It’s an excellent example of its type.

What I didn’t know before I did this puzzle: that TIGER BEAT was founded in 1965. 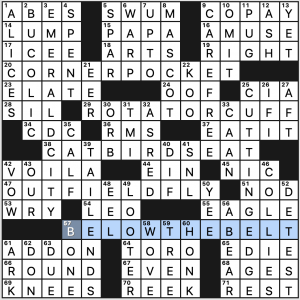 So I think my problem is the cluing of the revealer which states you will find all these items “below the belt.” Not “maybe.” Not “perhaps.” Just, “This is where they are.” Which is clearly not the case. If the clue was adjusted to read “where you might find…”, then I probably would have thought nothing of it.

My other problem with the puzzle was 49d LOOTER and its clue [Blackout baddie] which drove me to distraction. I get what it’s going for—taking aim at opportunistic looters during a power outage—but it really should have been reclued in light of the recent Blackout Tuesday, a well-publicized cessation of work in the music industry to raise awareness of the issues of racism and police brutality in our country. Even more, painting all looters with the same brush rubs me the wrong way. Of course, looting isn’t a good thing, but when we start to look at the reasons behind why people do it, we find some layers of nuance that are worth studying. All this could’ve been avoided by easily changing the entry to LOOSEN with the crossings SARA, EVEN, and NEED. I realize the puzzle was probably submitted months ago before the recent protests, but it seems like there was enough time to make changes during the editorial process.

Getting past all that, the other long fill entries are wonderful: BUCOLIC, CAREFREE, EMERALD CITY, CUTTING EDGE, TAIL ENDS and COLLIES. That’s a lot of sparkle.

Unfortunately for me, that sparkle got dulled by a theme which needed just a little adjustment in the cluing and an entry/clue combo that didn’t need to be in the grid. 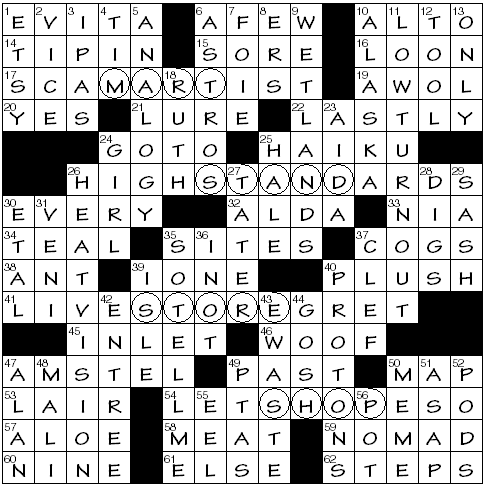 Dead-center in 30a [Each] EVERY themer is the name of a place where retail commerce occurs, more often than not spanning multiple words.

This is a lovely, lightly challenging themeless puzzle from Patrick Berry, complete with lots of solid longish entries and fun cluing. As always with Patrick Berry puzzles, it is impeccably made, but it also left me a little cold; it’s almost like his puzzles are a little too perfect? It doesn’t have the same crunchy colloquialism/neologism/current pop culture feel that many other New Yorker puzzles have. Which is fine! The crossword universe is vast and contains many, many multitudes, and there is more than enough room in the New Yorker for multiple styles of themelesses; perhaps I simply prefer a messier puzzle. Anyways, all of that to say, this is an *excellent* crossword puzzle with very few things to critique! 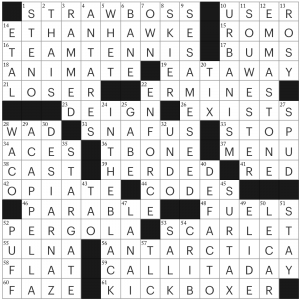 The long entries that stood out for me were in the SE corner, where we have ANTARCTICA (with a fabulous clue featuring an explorer I had not heard of) / CALL IT A DAY (colloquialism!) / KICKBOXER. In the opposite corner, we had STRAW BOSS / ETHAN HAWKE / TEAM TENNIS. I had never heard of STRAW BOSS and thought the Davis Cup had something to do with sailing, so, that corner was a little slow to fall for me. We also have other neat longish stuff in the NE (URBANISM / SOUWESTER / EMMA STONE) and SW (A CAPPELLA / DESI ARNAZ / STARGATE).