Title: “Triple Feature”
Prompt: The meta for this puzzle is a song from the ’60s.
Answer: “Love Is All Around” by the Troggs 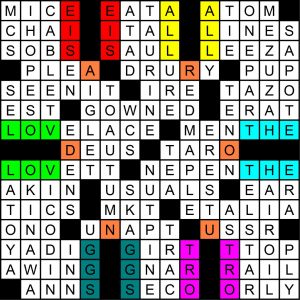 First thing I noticed while solving is that there is a whole lot of stress on the fill. It’s Pete so he manages to fit some great stuff in like VICODIN, TO AUTUMN, MEZUZAH, CABLE TV and I HOPE SO.

But then, in a grid whose longest entries are just eight letters long, we also have SEL, SAPOTE, TRO, GNAR, TRAC, MKT, UNAPT, AIGLET, and EIS. Many of these could’ve been easily removed, so clearly he had some reason for including them (GNAR/TRO could just be GNAW/TWO, for example).

We get a free hint: the six circled letters in the center of the grid spell AROUND. After a few minutes of grid-scanning, i started to see the theme pattern: around the six fingers of black squares at the edge of the grid, we have symmetrically-placed letter pairs that spell LOV/EIS/ALL and THE/TRO/GGS. Aha! So that’s why we had TRO instead of TWO there. So the answer is LOVE IS ALL AROUND by the Troggs, and the circled squares of AROUND each touch one of those fingers of black squares.

Just 256 correct answers, so for the second month in a row this one played significantly easier for me than for most solvers. Could it be that I’ve finally figured Pete out after all these years!? I won’t get too overconfident.

This entry was posted in Contests and tagged crossword contest, Pete Muller. Bookmark the permalink.