It took me a minute to figure out the theme after I finished the puzzle. The revealer is [Some household helpers … or an oral hint to 17-, 24-, 51- and 63-Across], AU PAIRS. I went looking for the sound and then realized it refers to the letters – O pairs. Each theme answer has two pairs of Os. 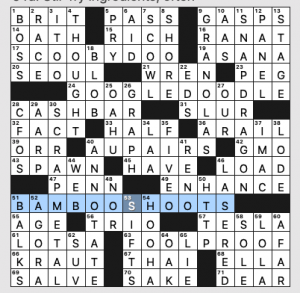 I like this theme. It’s solid, consistent, and smooth, and it’s accessible for new Monday solvers. I also giggle every time I see or hear SCOOBY–DOO.

What I didn’t know before I did this puzzle: that SNAPDRAGONs are named after actual dragons. Never thought about it.

Surprisingly, there is no math involved in this puzzle. Each theme answer ends in a word that can also describe someone performing mathematical computations. 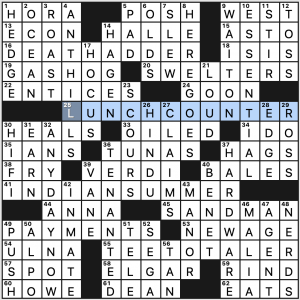 Aside from “counter,” no one would ever use these words in a mathematical context; people would just look at you funny.  But those of us who have been around crosswords for a while have seen these words before, usually in deceptive clues. So from that standpoint, the theme works as a straightforward synonym theme. But anyone new to crosswords might solve this and just groan, wondering who would ever call someone a “totaler.”

Fortunately, there’s some spiffy fill to rely on like “HERE GOES…,” “ANY DAY NOW…,” ANTHILLS, GASHOG, and SANDMAN.

But there’s also some more difficult stuff: a couple of composers, VERDI and ELGAR, a writer, Stephen Vincent BENET, a hockey player, Gordie HOWE, and oddly-clued HOCUS [Play a trick on]. I’ve never heard that word used anywhere without being followed by “Pocus.” For an early-in-the-week entry, that could’ve been clued a lot straighter.

But despite the groan-worthy punny nature of the theme, it works for me, and the long fill is solid-to-sparkly. I don’t know that I would choose this grid to offer a newbie solver, but for everyone else it’s a straight-over-the-plate solve. 3.4 stars.

We’ve got a new layout/design on the New Yorker Puzzles & Games page today, featuring, for some reason, little meters that look like gas tank indicators? I think it’s meant to tell us how hard each puzzle is, and today’s indicates that this puzzle is challenging. That message is reiterated on the puzzle page itself, where the subtitle proclaims this “A challenging puzzle.” Well, I think this probably says more about my relationship to the same cultural reference points as constructor Natan Last than it does about the puzzle’s actual difficulty, but I solved this faster than I did today’s (Monday!) New York Times. 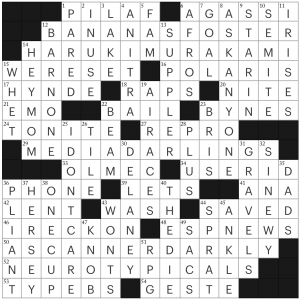 I may have some speed bias here, where kicking this puzzle’s ass leads me to believe the puzzle is pristine, fresh, and all-around excellent, but…. this puzzle is pristine, fresh, and all-around excellent. The long stuff! It shines! The short stuff! It’s good fill! The cluing! … I have go back and look at, because I went so fast I didn’t stop to appreciate it. Ok, I have gone back, and the cluing IS excellent!

Let’s run down the long stuff: BANANAS FOSTER, HARUKI MURAKAMI, MEDIA DARLINGS, A SCANNER DARKLY, NEUROTYPICALS, ASK ANYONE, I DON’T CARE. Whew! I love all of this. The only thing I *might* ding is the noun-ification of NEUROTYPICAL, which is a totally valid adjective but a little iffy as a noun? But the rest! I love HARUKI MURAKAMI, and ASK ANYONE / I DON’T CARE are excellent in-the-language phrases clued with perfect 1-to-1 quotes [“The whole world knows it!” / “Either’s fine”]. Great stuff. 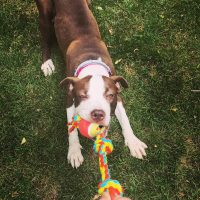 Ok that’s all for today. This puzzle is awesome and gets literally all the stars from me.

P.S. I adopted a puppy this weekend and here is a picture of her! 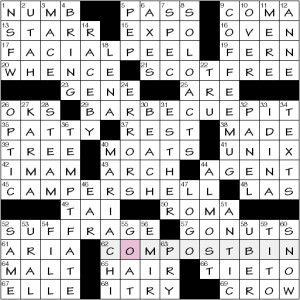 Peels, pits, and shells are indeed all compostable materials. If you’re interested in finding out the basics, you could do worse than these resources: Mother Jones, Apartment Therapy, Green Action Centre.

Has this theme been done before? Not that I know of, but even it were, would it be such a bad thing to reuse it?

Time for me to raise my own COFFEE MUG to the crossword and—hey, did you know coffee grounds are excellent compost fodder? 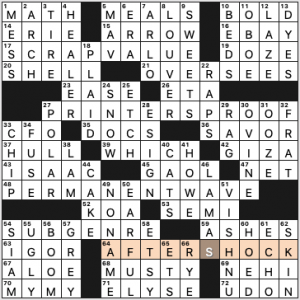 The theme revealer is 64a. [Earthquake echo, or where the last words of the answers to starred clues might go], AFTERSHOCK. Each themer’s second word can follow the word shock:

The fill’s generally on target for a Monday solving audience, though I’m not sure how many people under the age of 40 would know the oddly spelled name of a character from a 1980s show that airs in syndication only on the Antenna channel, which I’ve never heard of. Apparently it’s also streaming on Amazon Prime Video if you want to see a young Michael J. Fox playing ELYSE‘s son.