This week, we’re looking for a five-letter word. 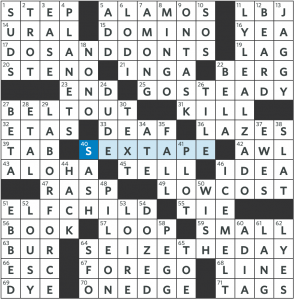 We’ve got five longer theme entries. I suspect each one will give us a letter in that word.

Hmmm, could the title suggest that the “head” of each themer is something we should “count”? Why, yes! I immediately noticed that DOS is Spanish for two, and that SEIZE is French for sixteen. The other “heads” didn’t register, so I did a little research/googling and found this site that has the numbers 1-20 in a whole buncha languages. Turns out:

Metasolving 101: When you have a bunch of rando-seeming numbers, see if they index anything in the grid. Turns out, yes:

The squares indexed by the letters spell TALLY, which is an appropriate five-letter word and our answer. Any other week, I’d have some attempt at humor and maybe a video and  random thoughts about whatever, but I’m battling a headache and the usual anxiety of the times, so this will have to do. See you next week.