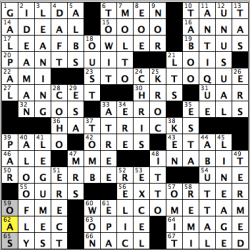 Good day, everyone! Hope all is well as we turn the corner to the latter part of June and into the summer!

I’m probably not the only one who really enjoyed the theme once deciphering it. In the grid, four two-word theme entries are made into puns by creating an anagram of the second word that also is a type of hat. The theme smack dab in the middle, HAT TRICKS (three goals scored by an individual player in one game, particularly in hockey or soccer), acts as the reveal (36A: [Hockey feats…and an alternate puzzle title!]).

Had a somewhat embarrassing moment when I first put in “lentils” instead of LEGUMES, and now I should punish myself for having legumes in the next five meals that I eat (41D: [Ingredients in a vegetarian stew]). We had a lot of funny people featured that gave this grid a lighter side, starting with GILDA (1A: [Riotous Radner of “SNL fame]) and continuing one-time “SNL” cast member CHRIS (24D: [Rock who said “Comedy is the blues for people who can’t sing]) and frequent “SNL” host ALEC (62D: [62A: [Baldwin of “Aloha”]), with the funnies finishing up with the clue for KEN (38D: [“Community” actor Jeong]).  There was also a chance to clue ANNA as Anna Kendrick to continue with that sub theme as well (16A: [“One True Thing”author Quindlen]). A number of places have experienced some serious heat before the official start of summer, so definitely time to be talking BTUS while possibly shopping for that new air conditioner (19A: [A/C measures]). At this time four years ago, the PANTSUIT was all the rage and a common topic of conversation (20A: [Two-piece businesswear]). Who would have thought then that the most important piece of clothing/covering four years from now would be the facemask? Sheesh! Wear that mask, people!

“Sports will make you smarter” moment of the day: ESA (29D: [___-Pekka Salonen (Finnish conductor)]) – If we started this blog with hockey, might as well end with it, right?! One of the best defensive forwards (and agitators) of his time, former National Hockey League player Esa Tikkanen was an integral member of five different Stanley Cup-winning teams during his career that spanned from 1985-1999. Playing on the left wing, Tikkanen was the linemate of future Hall of Famers Wayne Gretzky and Jari Kurri during the Edmonton Oilers’ run to the Stanley Cup in 1985, a season in which Tikkanen made his NHL debut during the playoffs and before playing in a regular season game. Tikkanen also won Stanley Cups with Oilers in 1987, 1988 and 1990, and with the New York Rangers in 1994. Tikkanen was named a finalist for the Selke Trophy three times, given to the NHL’s best defensive forward. (That award is different from award that is given to the league’s best defenseman, the Norris Trophy.) To really close this blog with a bow, Tikkanen finished career with eight career hat tricks, including one of the very few hat tricks ever scored in a Game 7 in NHL history, as his OT winner gave him his third goal of the game and the Oilers a series victory over their Alberta rivals, the Calgary Flames, in the 1991 Smythe Division semifinals — akin to the first round of the playoffs. 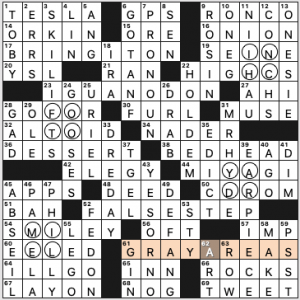 The theme revealer is GRAY AREAS, clued as 61a. [Ill-defined situations … as seen four times in this puzzle?]. There are four 2×2 chunks that are shaded gray (represented by circled squares in the .puz version), with words traveling clockwise in those chunks: an INCH, FOOT, YARD, and MILE, as in square inches, etc., of area. The long entries aren’t thematic.

I’m all right with most of the fill around those GRAY AREAS in their symmetrical spots. ABSEIL ([Descend by rope, as in mountaineering]) is an awfully tough word for anything but a Saturday puzzle, and it crosses EELED, which I can’t seem to get Words With Friends to recognize as a real word (and it accepts tons of wildly obscure words!) The Hawaiian island NIIHAU crossing Japanese AHI and proper name RONCO could be a quicksand trap for some solvers.

The longer fill’s pretty good—one FALSE STEP, BRING IT ON (another reason not to have those 5-letter ___ ON phrases in the grid), BEDHEAD, PHILLY. You could argue that the theme consists solely of a 9 and four triple-checked 4s … 25 squares in all. 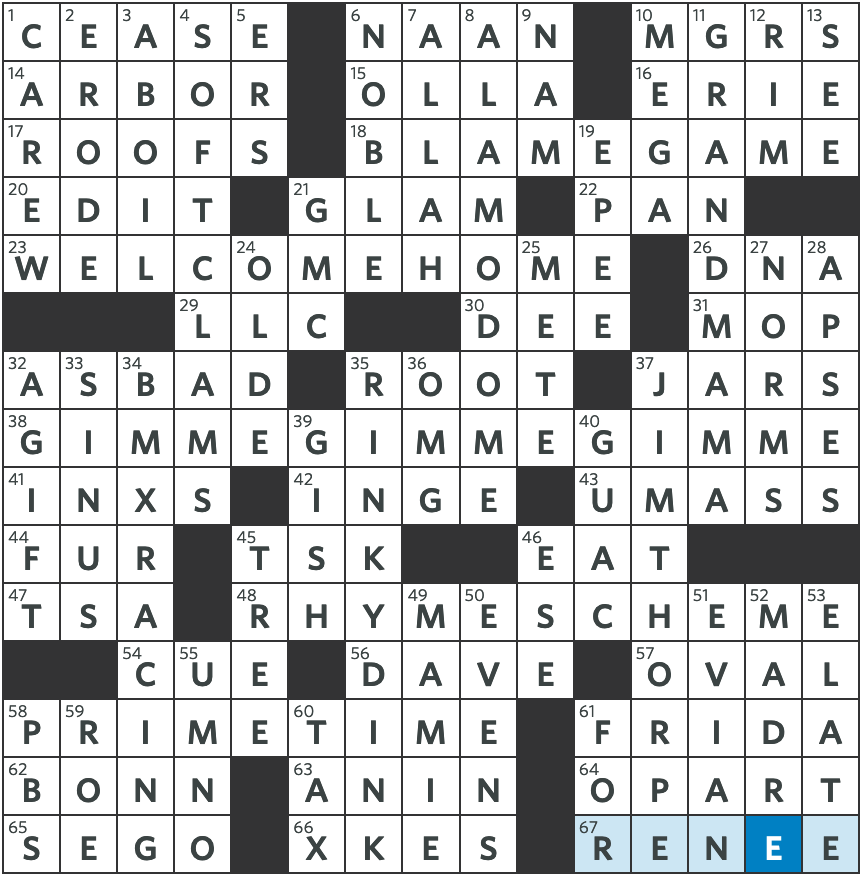 Fun theme and really smooth puzzle here. When I started, I thought the themes would be rhyming – giving the start with BLAME GAME but as I wen through the puzzle it became clear that that was not the case. That’s when the title clicked – Memes – indicating the ending of each word in the theme answers. I’m not sure if GIMME GIMME GIMME works quite as well as the two-word answers here, but I’m letting it slide because I enjoyed this one a lot.

The rest of the puzzle fell easily enough that there were no answers that stuck out as particularly tricky. Anything that might have caused me pause in one direction was easy enough to solve going in the other. Overall, a great early week, easy puzzle to fly through.

While I have your attention – click here to donate to Black Lives Matter. 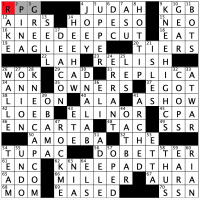 I am thinking this puzzle may be slightly inspired by Colin Kaepernick!

We are adding a KNEE to several phrases, or, in another sense, “taking a KNEE” and adding it to the phrase. Well done, especially since Kap is back in the news recently after the death of George Floyd, which has definitely hit a nerve in this country, forcing some who previously staunchly disagreed with the former QB’s stance to actually champion his return to the NFL. We will see if that will happen, because I still think football is unlikely, but there is too much money at stake to not barrel forward, virus or not. A timely theme, one that even has ME spewing out words! 4.7 stars for this one.

I will stop there! 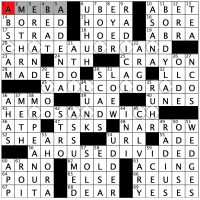 This is another unfamiliar byline to me, but a clever puzzle nonetheless. We have some circles to intrigue the solver, with the last theme entry being the revealer:

We have hidden in the circles a cabin, a villa, and a ranch. Nicely done. Very simple, and not too complicated. Which is a great thing on a Tuesday! Nice puzzle, Frank! 4.4 stars from me.