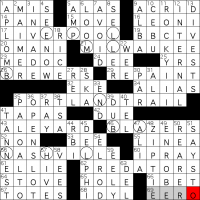 hello and welcome to episode #628 of matt gaffney’s weekly crossword contest, “A League of Their Own”. for this week 2 puzzle, the instructions tell us that the answer is a team in the National Football League. okay. what are the theme answers? they’re all sports teams:

what do these teams have in common? this took me a while. eventually i had to come at it from another angle, using the title and instructions. why do the instructions (and all the theme clues) say “national football league” (and english premier league, etc.) instead of the ubiquitous (and unambiguous) initialism NFL? aha! that turned out to be the key. each of these team names contains, in order (but not consecutive), the abbreviation for its league: LIVERPOOL is hiding EPL, MILWAUKEE BREWERS contains MLB, PORTLAND TRAIL BLAZERS contains NBA, and NASHVILLE PREDATORS contains NHL. so the meta answer must be an NFL team that contains the letters NFL in order, and it didn’t take me long to think of the ATLANTA FALCONS.

what a terrifically interesting meta! i certainly appreciated it as a sports fan, but also just as a fan of wordplay. i’m not going to go through and count, but it seems very surprising to me that matt was able to find examples of these in each league, let alone ones that fit symmetrically into a crossword grid. off the top of my head, i can’t think of any other teams that fit the theme! for example, there are plenty of other hockey teams that contain N, H, and L, but none of the others are in the right order. the NBA only has, i think, one other team that even has those three letters, and the A in MINNESOTA TIMBERWOLVES is in the wrong place. so i view the existence of this puzzle as a fairly miraculous occurrence, and i’m grateful that we got to reap the benefits of that miracle.

the grid is a beauty, too. the word count of 74 is quite low, and to accommodate the central 13 we have big corners with stacked long downs in the northeast and southwest. ROCKY III is terrific stuff, and i liked seeing PALO ALTO in the grid instead of just PALO or ALTO clued as a fill-in-the-blank. it was a little surprising to see BEE and HIVE in the grid but not clued together. the juxtaposition of actress ALIA shawkat and ALIAS also tickled me. there’s a bit of clunky fill like REL and EELY, but overall this was a delightful solve. five stars, for sure.