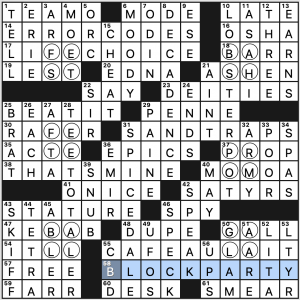 I don’t think I’ve ever heard the titular term, so I looked it up. It refers to a specific type of early 20th-century fundraising event which you can read about here. The main revealer in the puzzle, BLOCK PARTY, is a more modern term that describes the theme equally well. The circled squares in the grid form blocks, and the letters in each block spell out a word meaning some type of party: FEST, BASH, FETE, PROM, BALL, and GALA.

There’s no wordplay involved with this theme, but it did do its job; figuring it out did help me in a couple sections in the bottom half of the grid. But that means that other than those little blocks, the rest of the puzzle solves like a themeless. 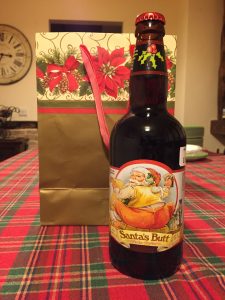 [Special brew for the holidays] = SPICED ALE. Like this?

That’s not a bad thing when you’ve got a lot of lovely long fill: ERROR CODES, LIFE CHOICE, LOBSTER POT, TEETOTALER, SAND TRAPS, “THAT’S MINE!,” CAFE AU LAIT, and “BEAT IT!”  SPICED ALE is good too, though I can’t say I’ve ever heard the term.

That said, the crossings in the SE corner, AARE, LITA, and LTYR, were not fun. Also, I didn’t know the name RAFER [Decathlete Johnson who won gold at the Rome Olympics ], but that’s on me. RAFER Johnson won gold in 1960, was one of the three men who tackled Sirhan Sirhan after he fatally shot Robert Kennedy (the other two were football player Rosey Greer and journalist George Plimpton), and was instrumental in creating the California Special Olympics. Later he turned to acting and had parts in an Elvis film and a James Bond film among others. Quite a career!

Tidy little theme with six(!) themed blocks (compared to yesterday’s NYT which only had four) as well as a boatload of excellent long fill. 3.8 stars. 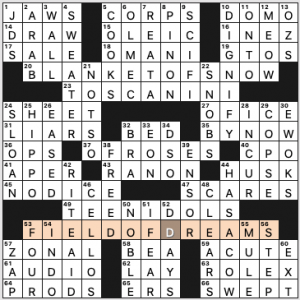 There was plenty of fill I didn’t love. OZS (the official plural of the “ounce” abbreviation is just oz., no S), the OLEIC/OMANI stack crossing REATA, APER, ENSOR? Hard pass.

What’s this? A New Yorker post on a Wednesday??! Believe it, dear readers, for it is true: the New Yorker has added another puzzle per week (and three new rockstar constructors and a rockstar editor!) to their weekly offerings. According to their site, the challenging-to-easy progression will continue, with Wednesdays being the “moderately challenging” puzzles. The new hires are Wyna Liu, Caitlin Reid, and Robyn Weintraub, three of my all-time favorite themeless constructors, and the new editor is Andy Kravis, recently of the NYT editorial team. The future is bright at the New Yorker crossword! 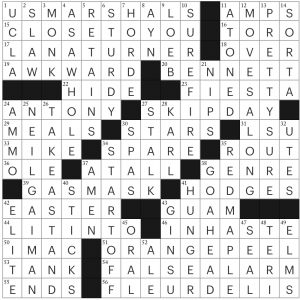 And that should come as no surprise; these puzzles are consistently excellent*, and today’s was no exception. Patrick Berry’s puzzle includes some lovely long entries, some “moderately challenging” cluing, and high-quality fill. I also love this grid design— it’s cute AND functional! It’s the “thanks, it has pockets!” of grids.

Ok, so long entries, from hardest to easiest sections for me:

AS A WHOLE, this puzzle is tight and moderately challenging, especially if you, like me, are unfamiliar with The Carpenters and LANA TURNER. Lots of stars from me, and see you all on Friday!

*Occasional dupes notwithstanding. I suspect that the disregard for dupe conventions is an editorial choice, rather than an editorial mistake; the sense I get is that they find it a convention that is more of a suggestion than a requirement? Would love to have this confirmed by someone in-the-know. 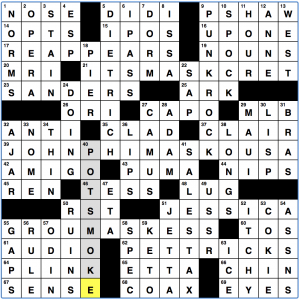 I loved this week’s AVCX.  It took me a second to realize what was going on with the theme clues, but that’s why this was a 4.5/5 in difficulty.  Let’s take a look:

Like we all should when in public spaces, per the latest from the WHO (check out that snazzy infographic at the link!), this puzzle’s theme answers are wearing a MASK over its NOSE (IT’S NO SECRET), LIPS (JOHN PHILIP SOUSA), and CHIN (GROUCHINESS).  You can’t just wear it around your neck as a talisman.  I also liked that NOSE, LIPS, and CHIN all appear in the grid relatively close to the affected theme entry.  It’s a solid construction throughout 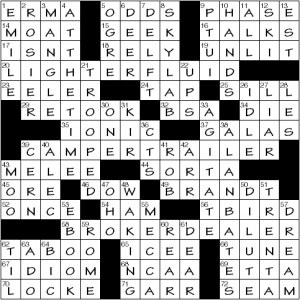 Nouns with -er suffixes are reinterpreted as comparative adjectives.

Was hoping to make something of the constructor’s surname, but ‘coult’ is meaningless. I did however learn that the Scottish/Irish name (I knew that part) “may be from Scottish Gaelic cùl tir, meaning ‘back land’, or (at least in the case of the Lanarkshire village) from a distortion of the Scots language Cootyre, meaning a safe place to store cows.” (Wikipedia, whence you can find the two sources for these claims)

Would’ve been more elegant—and perhaps not significantly more difficult—to have eliminated the -er suffix (in any context) from the ballast fill. Am looking at the crossing 23a [One may catch a moray] EELER (noun) and 2d [More optimistic] ROSIER (adjective), 6d [Animal on a XING sign] DEER is of course ok. 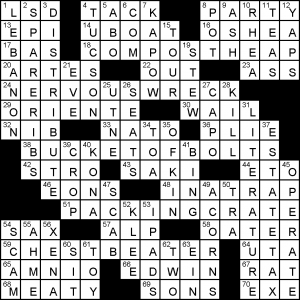 In (mostly old-timey) slang a clapped out car can be a HEAP, a WRECK, a CRATE or a BEATER, which end four entries; as well as a BUCKETOFBOLTS, the central revealing answer. Others include: LEMON (not necessarily old?), CLUNKER, RATTLETRAP, JALOPY, a HOOPTIE, and a JUNKER. I’d have personally eschewed CHESTBEATER in favour of the less contrived EGGBEATER with a new partner. In any case, 11/12/13/12/11 is also a tough theme to build a grid to fill cleanly for several reasons.

As an example of why this theme design makes for a difficult to fill grid see the top left, with dual foreign ARTES and ORIENTE plus sundry awkward 3s (the opposite corner features the same).

SPARERIBS is what I made last night, but marinaded and slow roasted in the oven, so that’s one answer with a strong positive association.