Fireball is a contest this week. We will have a review after the submission period ends.

Our theme today is pairs of entries where one is a well-known prepositional phrase and the other is a synonym of the second word in the first phrase. In addition, each prepositional phrase describes its literal location with resect to its partner entry. It’s easier to demonstrate than to explain. 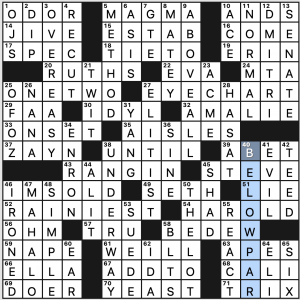 48d is SIMPLE and 3d, which sits above 48d in the grid, is clued [Location of this answer] and answered with OVER EASY. In other words, 3d OVER EASY is, literally, over a word that means the same as “easy.”

I can’t say I found this theme to be fun but it worked well enough, and it definitely helped me in the NE corner where I was getting bogged down with the likes of MTA, DMITRI, and AMELIE.

Elsewhere, WEILL [“Mack the Knife” composer] is not a name I tend to remember and frankly, probably isn’t in most solvers’ wheelhouses. ZAYN [Singer of the 2016 #1 hit “Pillowtalk”] is at least more modern, but still isn’t a name I’m going to remember. And TIE TO, ADD TO, HAS AT, OF OZ, and ESTAB are some of the crustier bits of fare. RECUT [Like some movies aired on TV] isn’t so hot either. In fact, that little northwest corner, with weird plural OJS, is easily fixed with something more interesting like GAMUT or KAPUT.

But I did like ELITIST, the ol’ ONE TWO, EYE CHART, HAROLD and the purple crayon, MAHALO, and “I’M SOLD!”

The theme is functional, though not terribly exciting. Sparkly fill is somewhat dulled by shorter, tired entries. 3.3 stars.

I lucked into cracking what the theme was here early on by deciding to start with the down clues today, but it was still a fun solve.

As hinted at by 17A (“Possible cause of a 61A”), there’s a BOTTLENECK in the middle of the grid representing a TRAFFIC JAM at 39A (which is only clued by “[Ugh, we’ve been stuck here for an hour…]”).  Looking at the down clues, we’ve got some rebus squares making up our BOTTLENECK: 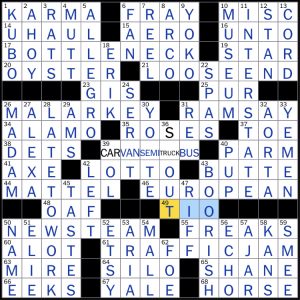 It’s all very neatly constructed, and creates a nice traffic jam effect in the middle when everything’s all together.  The extra down clues indicating that the INTERSTATE is a bad place for a TRAFFIC JAM, and if that happens, you might be LATE TO WORK are nice little touches.

This puzzle is should come with a warning label: Solve “as is”! 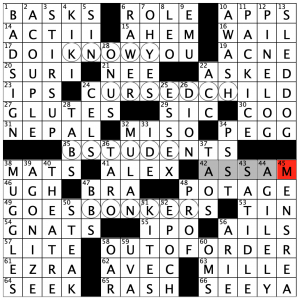 I have mixed feelings about this one (no pun intended). I really liked the build-up to the revealer, as my brain could not unscramble the hidden words during solve (I saw WONKY, but it seemed like such a strange word to be featured as a central idea to a puzzle that I assumed there was another anagram I was missing). Once I had the revealer, and realized wonky was correct, I saw BROKEN. The others were still tough for me to discern, but I eventually figured them out: BUSTED and CRUSHED. This is where I have to advocate for the newer solvers who are likely to solve this on paper or on the web app where they do not have circles and are asked to count and mentally circle their own letters: it’s too much to ask. Still mind-boggling to me that Universal runs puzzle after puzzle that requires circles in the grid, yet does not find it somewhat important to publish circles in the grid. Not the constructor’s fault at all.

Fill was harder for me than usually! Especially in the NW and SE. Had POTATO for POTAGE. I never thought to use AGILE in adverb form, so AGILELY was hard to uncover (and hard to say!). ASSAM, MILLE, and MENS REA added to the trickiness there. Up top, I forgot SURI‘s name, had URL for IPS, and couldn’t see KIKI (I love those types of clues, but that one may be pushin’ it a tad: [Apt name for a locksmith?].

In the end, I liked it mostly. Lively themers (though is CURSED CHILD a stand-alone phrase?). A reminder that I still need to go see the  Harry Potter show. I hope it’s still there when Broadway re-opens. Reading the books now. I’m such a MUGGLE… I waited this long.

P.S. Looks like this was a debut from Anna! Congrats! 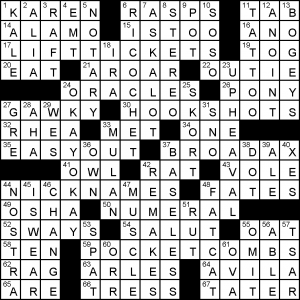 This puzzle’s theme is somewhat similar to yesterday’s in that it features a set of synonyms. Here, there is no revealer, except that each clue begins with “Steal…” We have five noun adjuncts that can also be synonyms for “to steal”, and the phrases are reimagined as though they were being used in that second way.

I didn’t know what a LIFTTICKET is – apparently that’s because I’ve never been to a ski resort (I think we have exactly one in the country). I also was iffy on what a POCKETCOMB is. It looks like what I would call a COMB.

[Like a loud crowd], AROAR. Not a word in Spelling Bee. Who is correct? 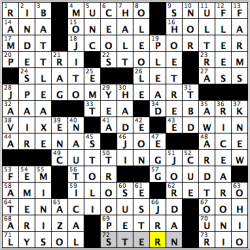 Good day, everyone! Here is hoping you all are continuing to stay safe!

Interesting hook today with today’s grid, as proper nouns are reimagined by adding a hook, in the form of the fishhook-looking letter J, to create puns.

“We on AWARD TOUR with Muhammad my man, going each and every place with the mic in their hand!” (35D: [1993 A Tribe Called Quest single].) The inclusion of this clue and entry alone gives this grid five stars, giving the grid the perfect RETRO feel in terms of music selection (62A: [Back in fashion]). The northwest and southeast corners were full of fun down entries, and all easily gettable to boot. Only trip-up when solving was putting in “final” instead of FATAL initially, for some reason (53D: [Terminal]).  I couldn’t help but think of “45” when seeing “fatal” cross LYSOL, given his now-infamous instructions on possibly introducing disinfectant into our bloodstream to combat COVID-19 (71A: [Cleaner brand]). You’re much better off introducing a MOJITO into your body instead (4D: [Rum and lime juice drink]).

“Sports will make you smarter” moment of the day: PETRA (69A: [Kvitova of tennis]) – Czech tennis superstar Petra Kvitova has seen her biggest on-court triumphs on the grass of Wimbledon, winning the ladies’ singles title at the All England Club in 2011 and 2014. But her on-court accomplishments (including a bronze medal in the 2016 Olympics) cannot stand up to what she overcame in Dec. 2016, when she was the victim of a robbery in her home in the Czech Republic and suffered multiple stab wounds at the hands of her attacker. Her injuries included suffering nerve damage in her left hand, the hand that she holds her racquet in. She regained the use of her left hand in Mar. 2017, though, for a long time, she was not able to make a ball of her left hand and was only able to close her hand far enough to hold a racquet. The 30-year-old is currently ranked 12th in the WTA singles rankings.

Thank you so much for your time, everybody! Have a great rest of your Thursday, and hope you have a good weekend coming up! Stay safe! Keep six feet apart from fellow citizens when you can! Wash your hands! Stay positive, if you are able to!