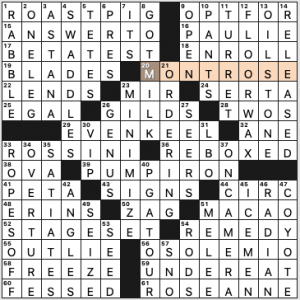 This 68-worder is a cut above those 7-dense themelesses that bug me, as it is instead laden with 8s and 6s. I rather like GOT MILK, SWADDLES, ROPES OFF, and PUMP IRON, but I’m still coming down on the side of preferring corner stacks of  9s, 10s, and 11s, because the fill here felt underwhelming.

Check out that byline! This is the first New Yorker puzzle from the three new themeless hires and I am HERE FOR IT. This header says the puzzle is “lightly challenging,” as all New Yorker Fridays are meant to be, but I’d say that is “lightly accurate.” The solve struck me as decidedly not at all challenging; this puzzle flew by so quickly that I didn’t see probably half of the clues, which meant I ended up with an error that added a minute to my time. 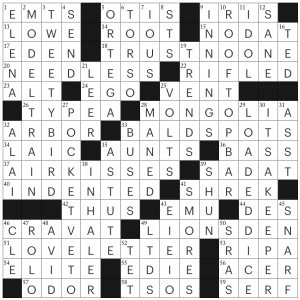 Which is fine! Easy puzzles are part of a balanced crossword diet, although I think that in lightening up the challenge this far, the puzzle lost a little of the culture-snobbery that makes the New Yorker puzzle distinct. There were no Names I Didn’t Know in this puzzle, and a surprising number of entries that were Fill I Could Live Without. I think there is a happy medium where the New Yorker puzzles can be both lightly challenging and Very New Yorker™, which they achieve when they pair the usual mix of artists/authors/underwater basketweavers/what-have-you with extremely gettable crosses.

That said, the long entries in this puzzle were absolutely lovely. TRUST NO ONE / LOVE LETTER / POCKET VETO / ROOFTOP BAR / TWEETY BIRD / LOADED DICE / MODEL TRAIN / IT’S A KEEPER. I particularly liked TRUST NO ONE and the clue/entry combo on POCKET VETO [Passive aggressive bill killer] and IT’S A KEEPER [Hang on to that one!]. ROOFTOP BAR is also timely, as bars in New York are reopening and the only ones people should even consider going to are the ones with outdoor space, and even then, getting close enough for AIR KISSES is probably a bad idea.

Overall, several stars from me. Robyn Weintraub is one of my all-time favorite themeless constructors, and I’m looking forward to her next one! 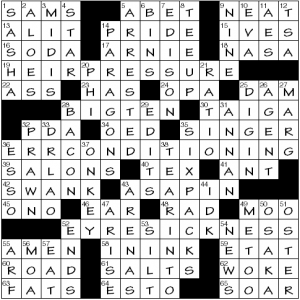 Homophones and near-homophones for air.

And it works well enough.

Theme: Letter Os are changed to As in the last word of each theme phrase, mimicking the title’s form. 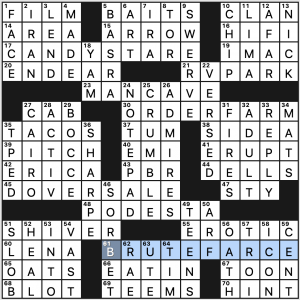 I feel like I’m missing some aspect to the theme because it seems pretty wide open. Changing a single letter is a pretty old gimmick in crossword-years; most puzzles these days would have some additional layer or constraint tying things together. For example, I was trying to determine if the changes were all related to the word “ward” somehow. But I can’t find any connection between the entries.

If there is no such connection or added constraint, I would expect the entries we’re given to be lol-funny or impressively clever. I’m sorry to say that these aren’t either of those things. They’re fine, but not especially memorable. I realize everyone’s sense of humor is different, but surely there’s something more interesting than DOVER SALE. I searched for a few minutes and came up with a few that might lend themselves to humorous cluing: KARATE CHAPS, PORT-A-PATTY, GRAPHIC NAVEL. Sadly, HOLD THE FART wouldn’t pass the breakfast test.

I believe this is a debut, so congratulations are in order. The grid is well-constructed with strong fill and clues. The theme obviously works, but I feel it could be more (unless I’m missing something, which wouldn’t be the first time). 3.3 stars.

I loved this puzzle. I do have one quibble: it’s not really a themeless. (and as someone pointed out below, the word “Themeless” is in quotes so they knew that!) 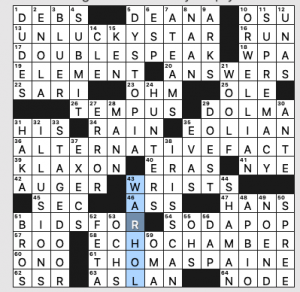 We have three entries that seem to have something in common:

Four of the downs fit in as well.

Knowing the Inkubator team as I do, I venture to say that any resemblance to the current US administration is purely intentional. Do not @ me in the comments to say that politics have no place in your puzzles and that we shouldn’t have opinions. If this isn’t your first visit here, you should already know that they do and we will. If it is your first visit, welcome. We are a feminist, anti-racist, anti-homophobic bunch, and we don’t intend to shut up about it. We do intend to keep calling out the utter hypocrisy of people who complain our commentary violates their sacred puzzle refuge from “politics” (by which they mean systems and practices that threaten the well-being of me, my friends, and my family) and believe those of us who find the status quo life-threatening should collaborate so they can maintain the illusion that there are refuges and safe havens. That’s privilege in action, boys and girls.

Back to the puzzle:

What I didn’t know before I did this puzzle: never heard of the Washington Rhinestone Club, and didn’t know DEANA Carter has a song called “Did I Shave My Legs for This?. Turns out it’s the title track of an album. I didn’t know that HANS was the German equivalent of John.