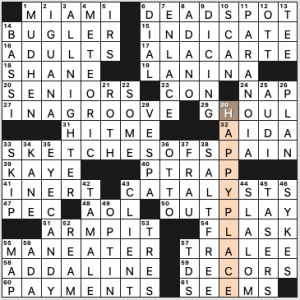 Wait, who scheduled this Friday puzzle for a Saturday? I swear to you that Stella’s Tough as Nails themelesses are harder than this one. I was hoping for a RuPaul’s Drag Race allusion in the puzzle (I’m a recent convert, Stella’s been a fan for much longer), but no, the direct reference is that I got to the puzzle late because I was watching Drag Race. Although! In tonight’s show, there was a Golden Girls angle, and 1a MIAMI is clued [Setting for “The Golden Girls”]. Did anyone else hazard a guess with LANAI? 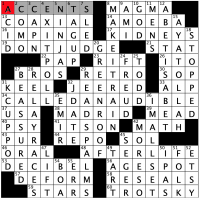 I love Sid’s puzzles! I also loved his recent interview on the Fill Me In podcast, which is my favorite podcast of all time! The discussion there was extremely insightful on the process of construction, certain entries that should and shouldn’t be used, and so forth. To go along with what Sid stated in that episode, there is nothing wrong with crosswords TEACHING you something. If I don’t know a certain term, that shouldn’t necessarily mean that it shouldn’t be in the puzzle. But I will surely know it the next time it is encountered! I was especially intrigued by the use of Indian terms, or lack thereof, in crosswords. There are not many Indian restaurants in my area, and for years I was just not really interested, but I have learned to really enjoy it now, and as soon as this pandemic is over that is one of the first places I am going!

I am rambling, but let’s just say that I don’t believe I have ever blogged a Sid Sivakumar puzzle, and his are quite enjoyable. His blog is here, so go check out some of his independent work. 4.6 stars for a stellar puzzle.

Also, if you haven’t already, subscribe to Matt Gritzmacher’s email service where he lists all of the puzzles that come out daily, including Sid’s! His website is found here. Have a safe and healthy weekend! 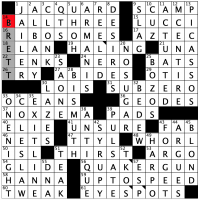 I am getting better! I will take this time in a heartbeat! As you can see from the grid image, I had a slight issue with the SE corner; see below for some commentary on a few of those entries. But for the most part, I flew through a lot of this puzzle. I am not keen on attending the ACPT, but I am looking forward to the online Boswords tournament, which is coming up in late July. That should be a lot of fun, just like the online tournament back in April that was a blast!

Anyway, doing tough crosswords is good training for tournaments, and the Stumper is, as always, a great barometer for your solving skills. So my theme today is one of positivity, since this IS still a difficult puzzle. And yes, in a tournament situation, those errors would kill me! Thanks for another great puzzle, Brad! 4.6 stars.

Again, have a wonderful weekend! 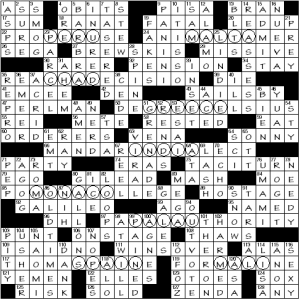 Not earth-shattering, but well done nonetheless.

p.s. I had no idea there have been so many adaptations and productions of the story.

Did you think I was going to have Donny and Marie anyway? Nope nope nope. 107d [Slangy denials] NOPES.

This post is only big enough to hold my two cents :) 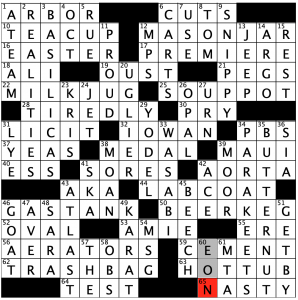 When I hit the 4 gallon soup pot less than halfway through the puzzle, I thought Oh boy… we’re in for some big containers ahead! I actually thought this was novel and fun, trying to figure out what was coming next. There was a bizarre element of suspense.

I did find the preciseness of the measurements juxtaposed with the word “perhaps” in each of the themers somewhat odd. I only like to see a “perhaps” in a clue once or twice per puzzle, so seeing it on repeat was a tad obnoxious for me. The only other nit I have is that TRASH BAG doesn’t feel like it belongs since the others are hard containers that typically hold liquids.

Just fine in the fill. Got a chuckle out of KRIS Kross. I remember the brief fad of wearing clothes backwards. It lasted a week and my seventh grade classmates looked like idiots. I did not partake in that one.

Great title! Also a bit of a throwback as it’s the title of one of my favorite 90’s movies starring Christian Slater that no one ever seems to remember when I bring it up in convo.