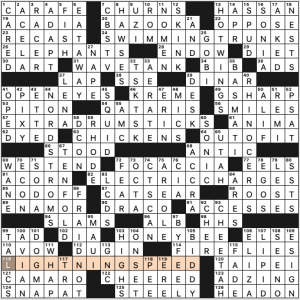 Happy Father’s Day to the papas! Today’s constructors are Byron Walden and his young son, Harrison. The “Animal Crossings” theme isn’t about the video game, it’s about phrases that can be clued as if they’re the collision of two different sorts of animals:

Fresh theme, kinda fun. You can almost hear the woeful dad jokes and a kid’s delighted laugh for each “What do you get when you cross…” riddle. Congrats to Harrison on his constructorial debut!

It would’ve been easy for Evan to use me and my dad as themers. We have the same name. 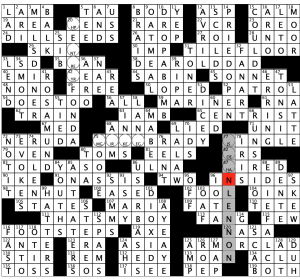 THEME: Schrödinger puzzle where either the father or son’s first name works in both the down/across positions.

Wow. Just wow. Sometimes Schrödinger puzzles are criticized with “cool-but-it’s-been-done-before”  side eye, but this is exceptional. For me, the best part was that AHA moment when I got to 139A as I had not realized up to that point what was going on. My down themers looked like a mess because I had a mishmash of “correct” answers in the crosses. 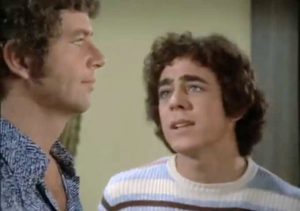 be used for both the father and the son, showing that bond between the two. And the title emphasizes that. And of course, the timing couldn’t be better as it’s Father’s Day (Mother’s Day got the better treatment last year! This year dad is up!) Fascinating that in order to pull this off, you need both the father and son in the same AREA who have the same number of letters in the first name. How many can there be? 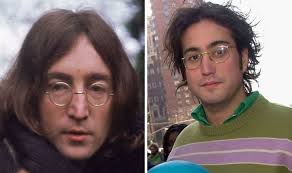 This may look light on themers, but it’s not at all, as those crosses put an exceptionally tight constraint on the grid. From a solver’s perspective, until the AHA comes, this might feel a bit like a themeless, but I’ll take it any day when all of a sudden you suck in your breath and stare wide eyed at the grid when you realize what’s going on.

Two things tripped me up: 41D [“Gone Girl” actress Pike] crossing my least favorite recurring clue: [Kid’s curt retort] (I never know what this is… it could be anything… in this case DOES TOO), and Emma SAMMS. But really, the most remarkable part of the fill is that the Schrödinger crosses don’t feel forced, or if the do, it’s smile-inducing like 87A [Put to work at a radio station, say] HIRED/AIRED.

I don’t usually star-rate the WaPo, but this is a solid 5 in my book.

UPDATE: There’s a nifty homage to Evan’s own father if you read the across clues carefully- check it out:

I can hear him saying “That’s my boy!” Well done, Evan.

THEME: Common phrases that end with something that might be delivered by the USPS. 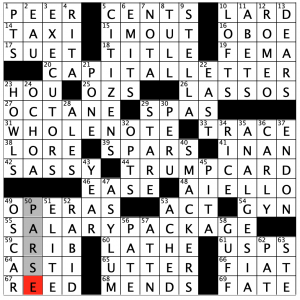 This is about as over-the-plate as it gets! Very straightforward theme, and an ideal Universal puzzle for newer solvers to get their feet wet. It introduces some crosswordese while not going too nutty, and the theme is super consistent and transparent once the revealer is uncovered.

AIELLO crossing ANALGESIA was a bit rough for me, but since the fill has to run through two themers (PACKAGE and USPS), we’ll forgive it!

If I were better at cryptics, I’d probably have figured out the theme from the title. Since I’m not good at cryptics despite following Stella’s blog, I didn’t know what was going on until I got to the revealer.

I noticed all the Bs in the theme answers. 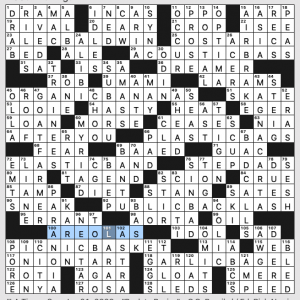 And the revealer: 114d [Basics appearing in reverse in eight puzzle answers], ABCS. “Back” in the title is a signal for reversals in cryptic clues. I learned that from Stella. I’m dipping my toe in the cryptic waters with the archive of Puns and Anagrams at the NYT.

Back to this puzzle: It’s a solid, smooth, Sunday theme. It’s not my favorite kind of theme, which is entirely personal taste. This is well-executed and a nice diversion for a lovely Sunday morning.

Happy Father’s Day to all the STEPDADS, granddads, foster dads, and other dad-figures who might not be recognized today, and compassion to all those for whom this day is difficult.

What I didn’t know before I did this puzzle: see above re: the current incarnation of “Match Game.” I also didn’t know there was a Chinese smartphone brand called OPPO or that MIA Hamm hails from Alabama, and I’ve never heard of the ENYA album “Watermark.” Here’s the title track. Don’t listen while you’re driving.

I was wondering how best to explain the theme when I realized I didn’t have to; the title does a pretty good job of it. But to be a little more verbose about it, the Across theme answers identify a word—cryptic-clue-style—which is spread apart in the circled letters of the Down theme answers. 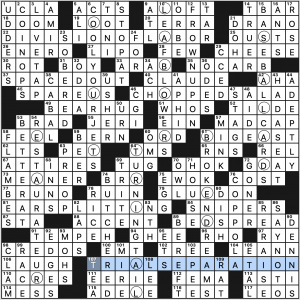 With all that theme material as interwoven as it is, you’d expect a lot of crud in the fill. But somehow the reverse is true. Look at all this good stuff: COIN-OPS, LOVETAP, FROWN UPON, BEARHUG, MADCAP, BIG EAST, FLAMBES, BUTCHERED (pronunciation), SNIPERS (certain eBayers as opposed to riflemen (rifle people?)), and Sofia COPPOLA. Sure there are some bland entries, too, like HAD A SEAT, BETTER AT, RE-RAISE, SAY NO TO, but they’re all gettable. The one challenging area is probably the crossing of TEMPEH [Tofu relative] and MOHS [___ scale, on which quartz is a 7]. But other than that, impressive fill given the theme density.

One clue of note: 4d. [Jake and ___ (comedy duo)]. AMIR. I don’t know these guys, probably because I’m old. They’re two former CollegeHumor writers with their own podcast and hundreds of Youtube videos. If you’ve got a favorite bit of theirs, feel free to link to it in the comments.