This month, Peter asks, “What thing associated with the United States is hinted at by this puzzle?” I suppose we’re getting close to Independence Day, so this is timely. 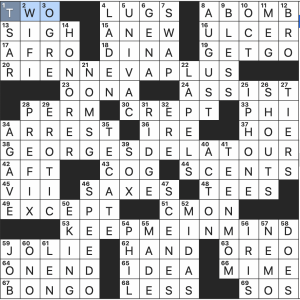 There are three themers:

First thing we noticed: Each themer has a bunch of state abbreviations in it:

Next thing we did: Since the title is “Apple-Pie Order,” we figured that we could associate each state with the number that corresponded to when it joined the union. Thus:

We then mapped those numbers on to the grid, generating: HOPADOGSS. Hmmmm well that’s close enough to HOT DOGS that maybe we’re on the right track but have the wrong states? And then we cracked it: We only need the two two-letter words in the center of each entry. Not sure if 1-Across was hinting at this direction, but I’ll take it. So:

And HOT DOG is our answer. Nice mechanism, though I’m sure there are plenty of solvers who needed all the downs for those theme entries, and I’ll admit that the possibility of other state abbreviations really threw us off the scent.