Fun with phonics in today’s puzzle!

I noticed the common letter strings in the theme answers but needed the revealer to understand why they mattered. 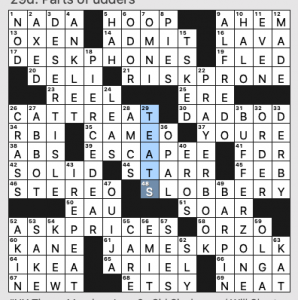 And the revealer: 39a [Fugitive who, phonetically, is “hiding” in certain letters in 17-, 21-, 52- and 61-Across]: ESCAPEE. S K P – get it? Very William Steig. My mother would have loved this puzzle; Steig’s C D B was one of her favorite books. I love the idea of the theme and aside from the raised eyebrow for RISK–PRONE, very much enjoyed it.

What I didn’t know before I did this puzzle: see above re: ASK PRICES.

This is a challenging puzzle! Some really excellent longer entries, and some equally excellent middle-length entries, and the delightfully specific cluing for entries that some solvers are not likely to know initially, make this puzzle a fun solve, with just a few fill entries I didn’t care for. And a cute grid design to boot! I suspect some solvers probably really struggled with a certain entry/combination of entries in the NE, so I’ll be interested to see how the ratings come in for this one. But for myself, I found this to be a fun challenge that taught me *several* new things while still being solvable, so I’m pretty into it. 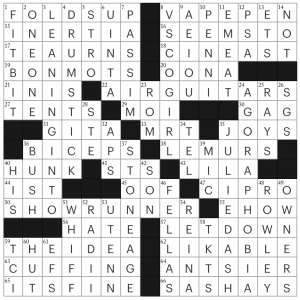 Today’s long entries include LEANING INTO, AIR GUITARS, SHOWRUNNER, AGORAPHOBIA, DRUMSTICK, and JULIE DASH. With the exception of LEANING INTO, which has a kind of unsatisfying preposition at the end (I wanted LEANING IN, which I think is the more common form of this verb), these are all super strong. I was happy to learn JULIE DASH in particular, a director I didn’t know, and the not-so-fun fact that she was the [First black woman to direct a feature-length film distributed theatrically in the United States] *IN 1991* which was LESS THAN 30 YEARS AGO. Absolutely wild.

There were more than few tricky spots on this puzzle, as one might expect from a challenging puzzle, and the place where I struggled the most and expect most other solvers also struggled was the NE. The quadruple-whammy of EMEAT / PENNI / VSCOGIRL / CINEAST pretty much slammed me to a halt up there (as the clever clue on VAPE PEN [Puff pieces?]) did not help! I’ve seen VSCOGIRL or references to VSCO three times now in my solving-and-blogging career. The first time, I called my Zoomer brother, followed by my Millennial-Zoomer sister, and neither could explain VSCO to me, nor the concept of a VSCOGIRL, and the internet has been pretty much no help. And each subsequent encounter with the term, I completely blank on the combination of letters that is VSCO. Maybe now that I’ve written all this out I’ll remember it next time! I did not know “Let ‘EM EAT Cake!” but it strikes me as a somewhat inelegant partial, and PENNI crossing OONA and CINEAST was just rough for me.

The other tricky spot was the NW, where both UINTA and PASSIM were unfamiliar to me. The UI at the start of UINTA looked like it just couldn’t be right, so guessing at the preposition at the end of FOLDS UP were my last two squares. Also, I’d saying folding something up is a much neater action than crumpling, but maybe I’m just crumpling wrong? Regardless, even though these sections were tough, I really enjoyed finally cracking them! 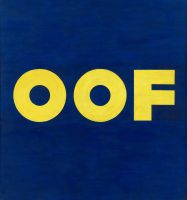 Overall, this is a challenging puzzle that had all the elements I look for in a themeless puzzle. Was it hard? Yes, for sure. Was it a worthy struggle? Absolutely. Tons of stars from me. I’m gonna go see about becoming a VSCOGIRL, see you all on Wednesday. 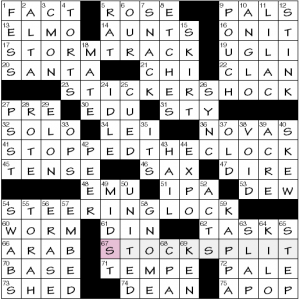 I appreciate how the answers alternate between STO*CK and ST*OCK. Nice touch.

Our theme answers today are well-known phrases that end in a word that could also be a kind of woodworking tool. 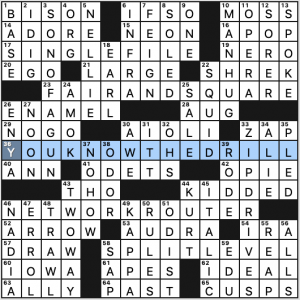 Straight-forward, consistent, and accessible, making it just right for a start-the-week puzzle.

Elsewhere, SON OF A GUN had me worried at first, but it all turned out okay. ZIP DRIVES is pretty dated though (okay, maybe not as dated as SON OF A GUN), and I expect they’ve lost their crossword currency. Not a problem for me though, since I used to own a couple of them. MANHUG was the other bit of fun fill—a [Sometimes-awkward embrace] no doubt accompanied by plenty of back-slapping.

If you could get past all the names, this grid shouldn’t have been any trouble for you. Cluing was Monday-straight and the theme easy to grasp. 3.5 stars from me.

The hardest part is trying to decide which Weird Al video to embed—the song actually titled “Handy” from his latest album or his earlier “Hardware Store” which I love a lot. Well, it turns out Mr. Yankovic made no “Hardware Store” video, but I just discovered a pretty fun fan-made offering. What really gets me is that these guys are Brits (evidenced by their visit to a B&Q store) yet are fan enough of Weird Al to make their own impressive video. If you want to watch “Handy” (a parody of Iggy Azalea’s “Fancy”), you can see it here.