This week, Matt wants us to find a two-letter initialism. OK! 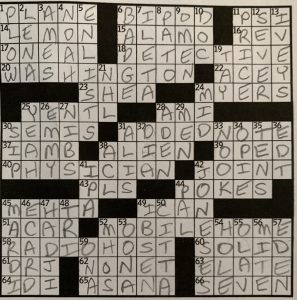 We learn from 66-Across that there are SEVEN theme answers in the grid:

First insight: All of these entries have a two-letter equivalent:

Third insight: The letters added to the two-letter initialisms in order to make the three-letter entries spell out SOLDIER.

Fourth insight: Applying the first insight, a two-letter initialism for SOLDIER is GI, which is our answer. The abbreviation GI is understood to stand for general issue, but some etymologists claim it initially stood for galvanized iron. I thought this was lovely! It had a really satisfying mechanism, a solid Week 2.5, maybe, on the Gaffney Scale — gettable, but just challenging enough.