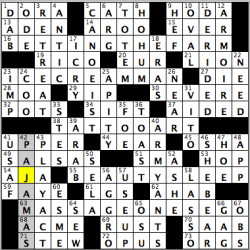 Today’s grid features five theme entries that start with a word or words which can also come before the word “parlor.” Unfortunately, there’s no phrase with “pizza,” meaning that it was a missed opportunity to put “PIZZA RAT,” the unofficial mascot of the New York City Transit Authority subway system, in a crossword. (Link provided, in case seeing a rat hustling for some scraps does not make you squeamish.)

It has officially touched 90 degrees here in New York, and combining that with the humidity definitely makes conditions SEVERE when walking around the city that has started its second phase of reopening (30A: [Like extreme weather]). If one allows his or her mind to stretch a little bit, there’s a little bit of an ode to the armed forces, with the USAF (41D: [“Wild Blue Yonder” mil. group]) and the beginning of the entry ARMY ANTS (40D: [Six-legged marchers]). Actually, the former (USAF) reminded me of the couple of times that I was in San Diego to broadcast a 2007 football bowl game involving the Naval Academy and a 2010 game involving the Air Force and how much fun it was hearing the fight songs for both schools, including “Wild Blue Yonder,” in a city where the presence of the country’s armed forced is huge. There were a number of seven-letter entries in the grid that had some stick, and my personal favorite of that lot was DERIDED (11D: [Jeered at]). One of those other entries, SHE BEAR, then reminded me that UCLA, whose sports teams are nicknamed “Bruins,” does have a female mascot live at basketball games (46D: [Female bruin]). Meet Joe and Josephine (Josie) Bruin. Yes, this is a thing…

“Sports will make you smarter” moment of the day: RICO (19A: [Puerto ___]) – Though the clue references one Latin American island, today’s subject comes from a different island in the Caribbean Sea. Longtime Major League Baseball player Rico Carty was one of the first stars in MLB who hailed from the Dominican Republic. Carty played from 1963 to 1979, and in his official rookie season in 1964, he batted .330 for the Milwaukee Braves and finished second in the National League batting title race to another Caribbean baseball legend, Roberto Clemente. Carty won the league batting title in 1970 (for the sam franchise, but now playing in Atlanta instead of Milwaukee) with a .366 average, and although he did not appear on the All-Star Game ballot, Carty made the 1970 All-Star Game as a write-in candidate and actually started the game in the outfield. Carty ended his career with a .299 batting average, 204 home runs and 890 runs batted in. 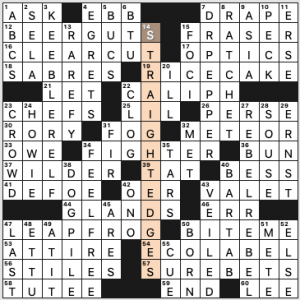 Today’s theme is a visual one rather than wordplay. The theme revealer is STRAIGHT EDGES, clued as [Rulers, e.g. … or what the letters in 3-, 7-, 27- and 34-Down all have]. You could trace a straight line down the left side of those four entries and have that line be part of every letter. KEEBLER ELF, “FEEL FREE,” DR PEPPER, and “REBEL, REBEL” could be joined by phrases with the letters H, M, and N, which also start with a straight-up-and-down stroke. They’re lively entries unto themselves.

New to me, I think: 54a. [Sticker on green products], ECOLABEL. Really?

Fill that might be a tad out of place in a Tuesday puzzle: ERSE, SOUSE, STILES. If only historian and two-time Pulitzer-winning author T.J. Stiles (whom I went to college with) were deemed famous enough for a Tuesday puzzle! T.J. has written three well-received biographies, on Jesse James (whose gang tried to rob the bank in Northfield, Minnesota, where the aforementioned college is located), Cornelius Vanderbilt, and George Custer of “Last Stand” renown. 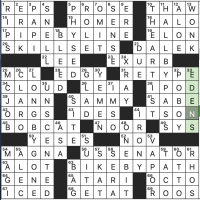 Nice little theme today. Did this make you think of your times tables?

It looks like we have four common words that all start with BY- and we clue it in a punny was like we were multiplying. Maybe a slight bit quirky, but easily solvable. My time here was well under 4 minutes, so not a difficult puzzle, although solving in Black Ink is quicker than in Across Lite. I prefer Across Lite, though, because the letters are bigger and I am getting old! Can you enlarge the grid in Black Ink? If so, please let me know! 4.3 stars this week. 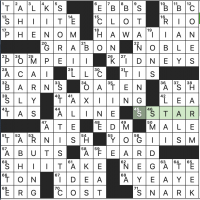 This is another byline in the LAT I am not as familiar with as some others. Nice puzzle, though! The “ayes” (I’s!) have it!

Look at all those theme answers! I think I like 55A the best! What other double I words are there, other than the Nintendo WII? I can’t think of anymore off the top of my head, but this puzzle has most of them! A solid 4.7 stars for a stellar job!