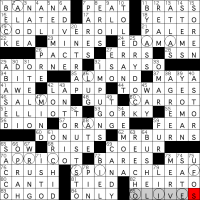 hello and welcome to episode #629 of matt gaffney’s weekly crossword contest, “Good for You”. for this week 3 puzzle, the instructions tell us that the answer is something you might have done today in the kitchen. okay. what are the theme answers? ten answers in the 17×17 grid are foods, clued with a parenthetical health benefit:

(there’s also {Cruller cousins} DONUTS, but as that doesn’t have a parenthetical, and the health benefits of DONUTS are not exactly touted, i’m going to assume it’s not thematic.)

based on “improves your vision”, i thought we might be dealing with vitamins here, since vitamin A is well known for that; likewise vitamin C for “may help prevent colds”. one straightforward idea for this mechanism is to take one vitamin corresponding to each supposed health benefit, and use it to pick out a letter of the answer word. i was encouraged by the fact that SPINACH LEAF, which seemed to be unnecessarily long (why not just SPINACH?), is clued with a reference to wounds healing, and vitamin K is important for blood clotting. K is the 11th letter of the alphabet, and SPINACH LEAF is just long enough to have an 11th letter. so that seemed promising. also, although there are several different important B vitamins, all of them are related to metabolism, suggesting that the parenthetical clue on BANANA might refer to B vitamins in general, rather than specifically B1 or B6 or what have you. that seemed cleaner.

here’s where “straightforward” breaks down badly: it turns out to be impossible to clearly associate vitamins with health benefits one-to-one. for example, if you google “which vitamin is a powerful antioxidant”, you get various results for vitamins A, C, and E. so we could be looking at the O, I, or E of OLIVES.

here are my best guesses as to which vitamin is suggested by which clue based on web searching for the various health benefits:

what does this spell out? um, great question. i’m looking at ACALMCA???, where the first ? is R/P/C, the second is F/I/S, and the third is O/I/E. i don’t mind A CALM, but there is no word or phrase that fits the pattern of the second half.

(in case you’re wondering, searching for the particular foods in the theme answers along with the parenthetical health benefits made the search results worse, rather than better. most fruits and vegetables are a good source of most vitamins.)

i’m going to level with you: this is an immensely frustrating and unfun meta. i take my blogging responsibilities fairly seriously, so i did spend quite a bit of time trying to figure out which vitamins are suggested by each of the parenthetical clues, but it was a decidedly unpleasant experience, and the payoff… well, i haven’t reached the payoff yet. i can’t even come up with a guess for the meta answer based on what i’ve got. i would imagine it’s ten letters, and maybe it even begins with A CALM, but i can’t shoehorn another word or phrase into the rest of the sequence.

i hope (but i don’t really think) that i’m missing something, and there’s some kind of unambiguous solving path that i just haven’t thought of. but it seems like what i’m doing is logically suggested by the puzzle, and it’s just not working well enough for me to want to keep trying other vitamin combinations, so i’m going to give up.

in the abstract, a meta mechanism based on identifying vitamins makes some sense, as they are named for letters and there is a clear way to associate those names with letters in the theme answers. but there’s just no scientific consensus about most of these health benefits. and in the absence of consensus, you’d need a specific reliable source to base this meta on, and as far as i can tell, there isn’t one. that makes this into an exercise in frustration.

that’s all from me. hopefully the next one lands a little better.