I’ve never heard the title phrase. Apparently, it’s a golf term. That explains it. Everything I ever needed to know about golf, I learned from George Carlin.

The revealer is another sports term—this time from basketball—which I have heard (though I admit I had to look up its meaning). Clued [Superior court feats suggested by 20-, 32- and 41-Across], 54a’s answer is TRIPLE-DOUBLES. In the grid, it’s referring to the fact that the other theme answers all have three sets of double letters. (Out of interest, I looked up the etymologies of each word on Wikipedia.) 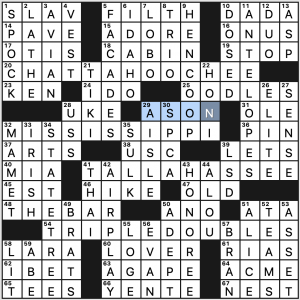 Elsewhere, ANTELOPES and STATE TREE are the marquee Downs today, plus there’s FACADES, HONOREE, AIRPLAY, and HEN COOP which doesn’t sit well in my ear as opposed to “chicken coop.” And hang on, isn’t the plural of antelope “antelope”? (I guess either is acceptable.)

But now on to the elephant in the room: the crossing of ASON [Chacun ___ goût (to each his own)] and HONI [___ soit qui mal y pense (Order of the Garter motto)] at the N. Not only are these both lousy bits of fill, but in what country is it fair to cross entries with little-known French sayings? (I’m guessing…France.) The first translates to “to each his own” as the clue states, the second to “shame be to him who thinks evil of it.” Well, shame on me, but I think this is a terrible crossing. But to each their own, I guess. Somehow I guessed the N correctly on the first try, but was shocked when I did. An easy remedy is to clue ASON as the partial [“Unto us ___ is given”]. But with a little bit of work, that central section can be cleaned up by changing HONI to HOPI, ASON to PLOP, etc., etc.

Despite the one crossing in the middle, I found the theme interesting and the rest of the grid solid. 3.5 stars. 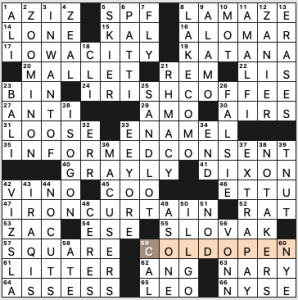 I’ll bet the northeast corner of this puzzle snagged some solvers. That stack of LAMAZE ALOMAR KATANA crossing AMALFI and a nonspecific ALAMO clue, oof. See also: the crossing of 42d. [Hungarian sporting dog], VIZSLA and 53a. [Country’s ___ Brown Band], ZAC. I could see someone trying MAC and VIMSLA there, despite MAC USERS being in the grid.

What else? Five things:

The theme’s all right, and there’s some cool fill but also some clunkers. And way too many proper nouns in the grid (over 20!) to not irk a lot of solvers. Foreign-ish vocab represented by KATANA LIS AMO VINO ETTU MOT, also a lot for a 15×15 grid. 3.5 stars from me. 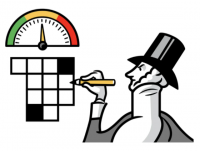 Happy Wednesday New Yorker!  This is actually pretty close to the face I made a couple of times during this solve, which was mostly smooth and fun, but punctuated with a few grumpy moments. The central entry of JONATHAN FRANZEN is a perfect (15) that I can’t believe I’ve never seen in a grid before, but this appears to be the JONATHAN FRANZEN debut! Too bad I haven’t read his books (uncultured brute that I am), so the clues were no help to me.

The long entries in this puzzle are all pretty solid: BOTTICELLI / BROOM-HILDA / BANANARAMA / EVEN STEVEN / BEACH READS / DILETTANTE. Of these, I think my favorites are DILETTANTE [Dabbler] and BEACH READS [Novel suggestions for sunbathers?]. I’ve never read the BROOM-HILDA comics, but the clue makes me think I’d probably enjoy them. *However,* upon googling BROOM-HILDA, I found that the clue [Cigar-smoking, beer-guzzling witch of comics] is taken almost verbatim from the first paragraph of the BROOM-HILDA Wikipedia page, which is a little disappointing. Interestingly, upon further Wikipedia-page perusing, I learned that she is Attila the HUN‘s ex-wife! Missed opportunity for a cross-reference or wisely-avoided deep cut? 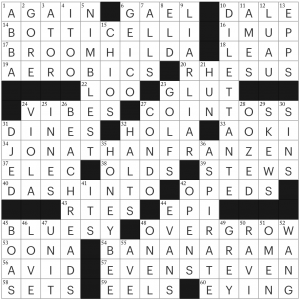 Overall, this moderately challenging puzzle was a lovely way to start the day, despite my few gripes— several stars from me. I’m so glad we get New Yorker puzzles three days per week now!!! 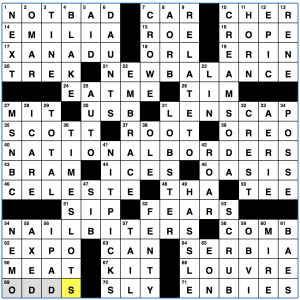 This week’s AVCX is an AVCX debut from Brooke Husic, who’s already had some puzzles published over in USA Today.  Congrats, Brooke!  This was a speedy solve for me, but it was a fun one nevertheless:

People who identify as neither male nor female are non-binary.  Non-binary often gets abbreviated as NB, so they’re also referred to as ENBIES.  This was a nice riff on that, with plenty of N.B. fill in the grid, and if you enjoyed it, I encourage you to take Brooke and Ben Tausig’s suggestion and donate to a group like The Okra Project that supports trans and non-binary people of color. 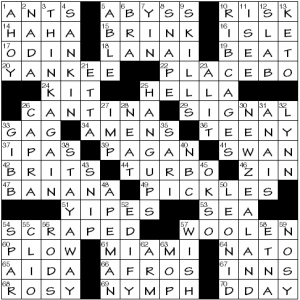 Whoops! Forgot that I was responsible for a write-up today. Have to make it quick as a result.

Theme is paired hirings and firings with a—how to put it?—terminal name pun? 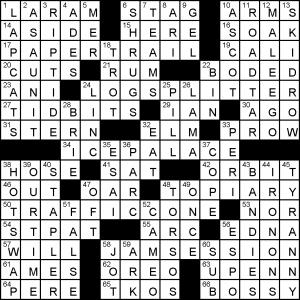 It’s a “word that follows” Wednesday. Today’s theme is explained at JAMSESSION. Each of four answers start with a word – PAPER, LOG, ICE, and TRAFFIC – that can end in JAM. In JAMSESSION, the sense is musical, while in the themers, it’s as in being stuck. In neither is it the fruity jam.

Things I was a bit iffy on: