Are we being lied to? Royce Ferguson BENDS THE TRUTH in this grid. Twice. The central revealer is clued [Is subtly misleading, or what each of 23- and 47-Across does, figuratively and literally]. I’m not sure that they each bend the truth literally, but they both have Ts in them which start a bent TRUTH identified by circles. 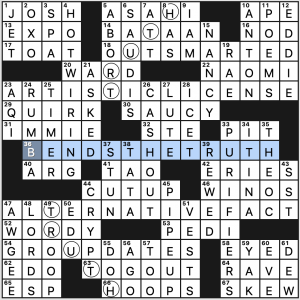 With only two actual theme answers, the theme feels a bit light at first, but these are beautiful grid-spanners and they go so well together. When you add in the revealer and the bent TRUTHs, I’m sold. Very nice grid design.

But another day, another difficult crossing. This one isn’t so bad as yesterday’s, but 23d AQI [EPS pollution meas.] crossing 31a IMMIE [Kid’s marble] at the initial I had me running the vowels. I couldn’t remember the initialism and EMMIE seemed more  likely. But it must have been in my little gray cells somewhere because I got it right in the end.

Highlights in the fill include OUTSMARTED, GROUP DATES, PURIFIERS, HOT WIRING, PIPE UP, and CASH OUT [Hand in one’s chips, say]. Here’s a question…why does “cash in” mean the exact same thing as CASH OUT?

There were some more serious moments as well.

I had absolutely no idea what was going on with this theme. I had to consult Peter’s write-up for an explanation, and that was almost as confusing as the grid. Every clue that includes the word [See] tells us to go look for another clue. Let’s see if this makes sense. 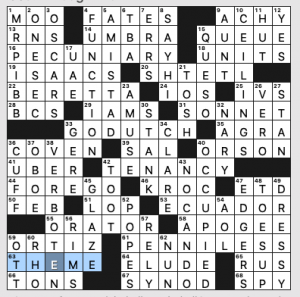 This is an amazing piece of construction. I suspect the reaction will be bimodal – solvers will either love it or hate it. I’m in the “love it” camp because it’s so elegant and original. I’d like to think if I’d solved it at some time other than the end of a long day that included 80 miles of driving, I would have figured it out. I’d like to think that. In any case, bravo! to Damon and Peter.

What I didn’t know before I did this puzzle: that Anna Paquin played Queen Isabella in AMISTAD.

This was a breezy Thursday NYT from Amanda Chung and Karl Ni: 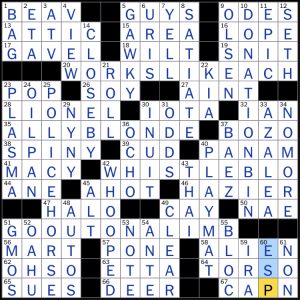 It’s not as high-concept as last week’s traffic jam, but it’s cute and I found myself less stuck mid-grid than I did with all those rebus squares in a row.  Each main theme answer is missing a “limb – WORKS LIKE A CHARM, LEGALLY BLONDE, and WHISTLEBLOWING

I hear that there’s a season two to Russian Doll coming out. So excited.

THEME: Words are “nested” inside one another. Removing the first and last letters reveals a new word, and in turn a wacky phrase is created. 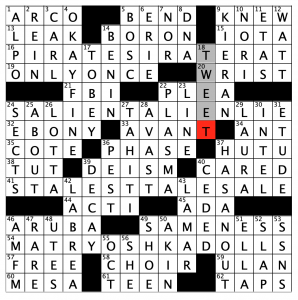 What a unique and clever set of themers! I really like that they were all grid spanners and that they were all completely bonkers. While I liked PIRATE’S IRATE RAT the best (fun visual!), the others were a lot of fun to figure out as well. This is also one of those puzzles where, if you figure out the theme, the fill and the longer answers work synergistically together to help you out.

At over 6 minutes, this was a much longer solve than normal for me. I’m usually in the low 4 minute mark. So I did get hung up a lot in the fill. Right off the bat I had some silly mistakes: ESSO for ARCO, then- because of the E in ESSO, ECHO for the clue [Chow chow?]. Mind you, I KNEW I was wrong, but I went ahead anyway. Speaking of KNEW, I entered WISH for [Taylor Swift’s “I ___ You Were Trouble”]. I dunno. Could work.

Fill was a bit crunchy throughout. SAMENESS (I’ve only heard this in Lois Lowry’s The Giver), HAS AN OUT, and ULAN kept me from really enjoying one corner. But with such a fine set of themers, it’s worth it.

This also appears to be a first for Michel Lopez! Congrats! What a debut! 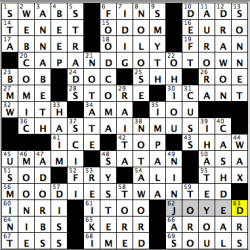 Good day, people! Hope all of you are well and are staying cool!

The dog days of summer hitting us definitely calls for a crossword that, literally, features dogs, right? In this case, phrases are reimagined as puns when the names of fictional dogs are slipped tucked inside of them.

If it was not for its crossings, I would have had nary a shot with MOONIE as that is completely new to me (46D: [Unification Church member]). The grid was a very salty one and didn’t suffer fools to well with the entries of NOT A WORD (38D: [“Hush your mouth!”]) and I HATE YOU (39D: [Pissed off words]). To make up for the curmudgeonly-sounding answers is the state of nirvana that comes from being in a FOOD COMA (6D: [Bliss after pigging out]). Seeing OHIO U, short for Ohio University in Athens, Ohio, actually brings back a painful memory in the winter of 2005, when I was beaten out in my quest to become a reporter at a brand new local news station (News 12 Brooklyn) by a young lady who, after I first met her on a day of auditions, told me she went to the journalism school at Ohio University (22D: [Sch. of Athens]). If you live in the Madison, Wisc. area, you can now see that lady, Amber Marie Noggle, anchor the evening newscasts on the city’s ABC affiliate. But I blog about crosswords and can be a media critic — and I’m a frequent critic of the establishment media — without having to get any stick from news directors or rabid Twitter trolls. So I guess I win that trade-off, Amber! :-)

“Sports will make you smarter” moment of the day: KERR (65A: [Steve in the ESPN documentary “The Last Dance”]) – Former Chicago Bulls guard Steve Kerr is the current head coach of the Golden State Warriors, and between his days as a player and head coach, has won eight NBA championships. Kerr is the NBA’s all-time leader in three-point field goal percentage (45.4).

One of the episodes of “The Last Dance” goes into detail about Steve Kerr’s father, Malcolm, who was a professor and president at the American University of Beirut specializing in the Middle East and Arab world. In 1984, when Steve was a freshman at the University of Arizona, Malcolm was killed inside of the school by gunmen aligned with a Shia Lebanese militia group. Given that incident and his father’s field of expertise, Steve has been one of the most outspoken sports figures over the past few years, not shying away from talking politics and using his platform in sports to speak truth to power.

Thank you so much for your time, everybody! Have a great rest of your Thursday, and hope you have a good weekend coming up! Stay safe! WEAR A MASK!! Keep six feet apart from fellow citizens when you can! Wash your hands! Stay positive, if you are able to! 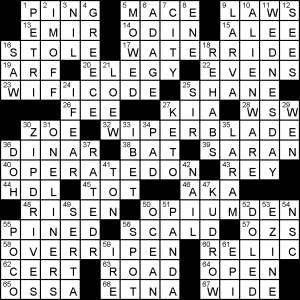 This is an ambitious double puzzle: the top half features OPEN/WIDE and the bottom WIDE/OPEN. Basically, WIDE and OPEN can be formed by the starts and ends of three phrases each. Personally, I’d have made it two each, because this puzzle is definitely straining under the weight of its concept. It’s a very interesting and unusual theme, but I don’t think the landing stuck. Of the 3 OPEN phrases, OPIUMDEN is the only one you might actually choose (depending on your views of its negative connotations). OVERRIPEN and OPERATEDON are both in stilted tenses for thematic convenience. Similarly only WIPERBLADE of the 3 WIDE phrases is to me an asset to the puzzle. WATERRIDE is rather generic and WIFICODE seems to be largely made up; there seems to be a WIFIPASSWORD and a WIFIQRCODE. It’s not a good sign that the first page of Google hits includes “people named Wifi Code.”

After WIFICODE, we get more computer-themed entries with expensive ALIENWARE that is quite specialised (though the clue leads you on via “The X Files”), and ZIPDRIVES, whose time as a commonly used peripheral was astonishingly brief.

Issue being repeated for the umpteenth time: high value letters aren’t a plus in a puzzle if they aren’t in interesting answers. The Z of EZINE/OZS is an eyesore. The standard grammar is 16 oz. not 16 ozs., and EZINE was in common use for an even shorter time than the ZIPDRIVE.