There’s some Inkubator news to report: Thursday’s email brought a bonus cryptic by Sara Goodchild that was edited by Stella Zawistowski. Also! Stella has joined the Inkubator editorial team. And furthermore! Inkubator’s adding a third regular/non-bonus puzzle each month, and that third puzzle will be a themeless edited by Stella. I’m looking forward to great things, and especially pleased to have this expansion in venues that publish themelesses. 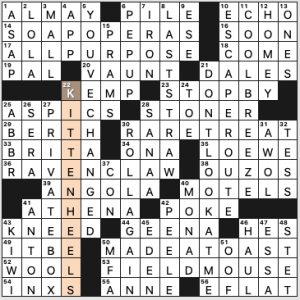 On top of the aforementioned Inkubator news, we also recently learned that Robyn Weintraub, Wyna Liu, and Caitlin Reid have joined the New Yorker’s crew of themeless constructors. I’ve enjoyed the hell out themelesses by all three of these women!

One thing that keeps me fond of Robyn’s puzzles is that she builds them around long fill (9 to 12 letters long, in this case) instead of drowning me in interlocked 7s. She also manages to include so much great fill. To wit: SOAP OPERAS, a RARE TREAT, RAVENCLAW, MADE A TOAST, “YOU’VE CHANGED” (which character in The Big Chill said that, with dismay, to Tom Berenger’s character? Mary Kay Place? Glenn Close?), KITTEN HEELS, ROLL AGAIN in a board game, ESCAPE ROUTE, a welcome COOL BREEZE, and “DON’T LOOK AT ME.” 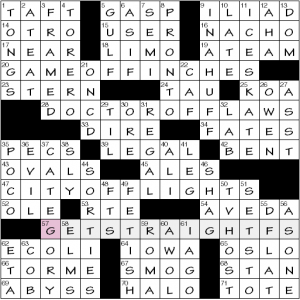 I’m not super-thrilled by this one. Feels flimsy, but I don’t feel too strongly (fortissimo?) about that opinion.

Fast forward to the following …

Welcome to the New Yorker, Caitlin Reid! This is our second puzzle from one of the three new hires to the roster (with Wyna Liu likely coming up soon), and it was a romp. Or, I think it was, but as with last week’s lightly challenging puzzle, it was over before I even really had a chance to read and enjoy the clues! This was my fastest solve this week, including the Monday NYT, but I enjoyed every second of it. 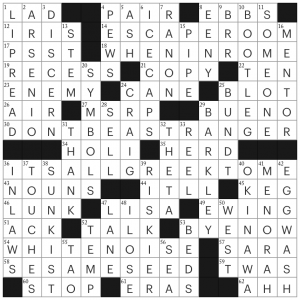 I particularly loved the long central entries of DON’T BE A STRANGER and IT’S ALL GREEK TO ME. One thing the New Yorker puzzles do incredibly well is find fun colloquial phrases and then translate them perfectly into equivalently fun clues [“I can’t make heads or tails of this!”]. It’s so good!!! The other long entries in the NE and SW were also great: ESCAPE ROOM / WHEN IN ROME / WHITE NOISE / SESAME SEED, all with completely gettable clues including the delightful [“I guess I’ll jump on this bandwagon, too”].

The only thing missing from this puzzle, for me, was the snobby New Yorker culture piece, but I think maybe that’s just incompatible with the challenge level they’re going for in these Friday puzzles (I think the new Wednesdays are about the same challenge level as the old Fridays, because these new Fridays are just blazingly fast solves).

Overall, this puzzle was a cool summer breeze of a solve, packed with great colloquialisms and excellent cluing. So many stars from me!

Camping is one of those outdoor activities most people are allowed to do during this pandemic, so this puzzle makes a good start to your camping weekend by giving you instructions on how to light a campfire.

I was expecting something along the lines of 1) gather wood and kindling, 2) build your fire—easy-to-burn tinder at the heart, then kindling, then larger pieces—in a tipi formation ensuring there is enough airflow underneath to feed the fire, 3) make a fire plow with some softwood and a pointed branch, 4) rub the branch against the plow until the friction generates enough heat to light a handful of tinder. Here’s a good primer on the process.

So I got a good laugh when I finished the puzzle, went back to look for the theme, and found these instructions: LIGHT MATCH STICK. Ha! 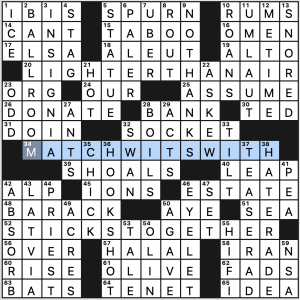 So I’m guessing Mr. Kalish was never a Boy Scout.

Now, maybe my interpretation is not quite right, since a LIGHTER could be used to start a fire. But why would you need a LIGHTER and a MATCH? No, I’m going to stick with my initial finding.

Oh, and my best tip for lighting a fire? Doritos make for good tinder to get your fire started. You’re welcome.

Great fill today all around. Let’s see, we’ve got BALLROOM, INSIGNIA, “NO THANKS,” UMLAUT, ME TIME, LATVIA, HOOKSHOT, TEASER AD, and a modern HATERADE [Mean critic’s “drink”]. Having only three theme answers leaves room for a lot of fun fill.

Clue of note: 11d. [Accent missing from “Haagen-Dazs”]. UMLAUT. Ha! Creative way to avoid having to figure out how to type the diacritic in the clue.

Fun, and funny (at least for me) puzzle with plenty of juicy fill. Four stars.