Hello, puzzle friends! There’s a grand new fund-raiser puzzle pack called Grids for Good, and you know how many crosswords are in it? The answer … is 42. Themed, themeless, and meta puzzles, something for everyone. Tons of familiar names among the constructors, plus some promising newbies. To get the puzzle pack, simply make a donation of at least $10 to a COVID-related charity or a racial justice organization of your choice, and email the receipt to the Grids for Good. You’ll receive both a PDF packet and a folder of .puz files. Go get yours! 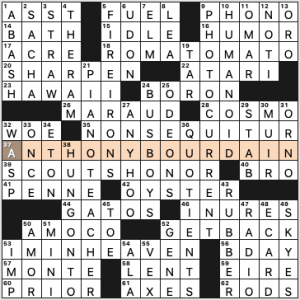 I like the center stack with the 11/15/11 entries, NON SEQUITUR, ANTHONY BOURDAIN, and SCOUT’S HONOR. I also like the twofer clue, 3d/14a. [One might be drawn], STRAW and BATH. (Anyone else pop SHADE into 3d first?) Most of the puzzle, thought, did not resonate strongly with me. PHOTOCURRENT, [Light-induced flow of electric charge]?? I prefer more in the vein of those central entries.

I’m confused by this: 48d. [Modern party planning aid], ECARD. In my experience, you send ecards in lieu of mailing a paper greeting card. To plan a party without mailing physical invitations, you might use Evite, which is in no sense an ECARD. Are there party-planning ECARDs now?

A fun revealer today brings to mind a Seinfeld episode (see below). IT’S NOT YOU IT’S ME is a [Blame-shifting breakup line … or a homophonic hint to 20-, 34- and 41-Across]. Theme answers have the letter U changed to ME. 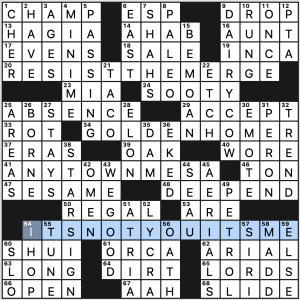 I must admit that since we’re working with homophones, I wanted the U sound and the ME sound to be consistent throughout the themers. When I saw that the U in “Anytown, USA” was being changed, I thought that’s what was happening, but obviously no one says “mee-sa” who isn’t Jar Jar Binks. Once I got myself past that mental hurdle, I was good with the theme.

DAIRY COW, STARSIGN, MINI-ME, DEEP END, and “WE GOOD” are the fill highlights, though I normally hear the latter as a question rather than a statement akin to [“It’s all cool”]. And MINI-ME usually gets an Austin Powers clue, but I guess it’s passed through to the vernacular enough to stand on its own.

Cluing was mostly straightforward, but felt fresh with plenty of modern references. All in all, a solid outing all around. 3.5 stars.

Wyna! I’m so excited to see this byline as the third of the three new hires over at the New Yorker crossword. One of my earliest crossword reviews was a review of Wyna’s NYT debut over on Rex Parker’s blog, so I would feel a kinship with Wyna on that basis alone. On top of that bit of kismet, however, Wyna’s puzzles also happen to be some of my favorites, and this puzzle illustrates exactly why that is. It’s got something for everyone: perfectly translated colloquialisms? Check! A perfect blend of old and new cultural references? Check! Cluing that made my laugh out loud and then google to verify that it’s true? Also check! Let’s get into this puzzle, and then a mea culpa. 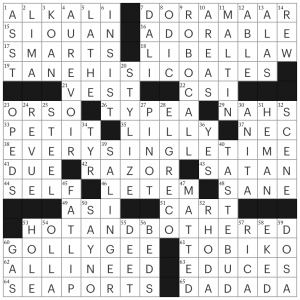 Ok the clue on EVERY SINGLE TIME [Chronic toe stubber’s refrain to a loose floorboard] is maybe my favorite clue of 2020. It’s *so* spot-on and evocative. Sometimes with colloquialisms like this there are a few possible entries that could match the clue, but I threw down EVERY SINGLE TIME (a grid-spanner!) without hesitation and only a couple of crosses. This clue is perfect and hilarious and I am in awe.

Other excellent long stuff includes: HOT AND BOTHERED (14), TA-NEHISI COATES (14), GOLLY GEE, ROBOCALL, ALL I NEED. Building a 14-15-14 grid as clean as this one is no small feat, and I am in awe of Wyna’s lovely fill. But most of all, I enjoyed the cluing voice. In addition to EVERY SINGLE TIME‘s masterful clue, we have [“Whatever, they can do what they want”] for LET ’EM, [Word that can follow “one,” but not any other number] for SELF, [State of matter whose name comes from the Dutch pronunciation of “chaos”] for GAS, and the hilarious [“___ dum” (Wikipedia page that redirects to “Symphony No. 5 (Beethoven)”)] for DA DA DA. I tested this out, and:

Whichhhh brings me to my mea culpa. On Monday, I counted men and women in the grid, and on Wednesday I did the same thing, and neither time did I acknowledge that representation is about more than just gender. As Kameron Austin Collins rightly pointed out in his incredibly thoughtful and generous comment, which I urge you to go back and read if you have not yet done so, this is the epitome of white feminism. I’m embarrassed that I wrote with so narrow a view to representation, without considering the intersecting identities that can contribute to marginalization in society and in puzzles. Amy helpfully pointed out that her version of the “Bechdel test for crosswords” involves counting white men and everyone else, which I think gets us closer to a sense of a puzzle’s inclusiveness. However, as Kam noted, keeping a tally for individual puzzles still does not grapple with the context of a constructor’s larger body of work or the standards we use to judge the “quality” of crossword puzzles.

Currently, I don’t have a better solution than tallying, but I would be very happy to hear suggestions for better measuring and addressing issues of representation in crosswords in the comments. I personally will strive to ensure that, in my reviews, “culture-free” puzzles that are ostensibly “neutral” on their face but which are “neutral” through their grounding in white middle-class dominant culture are called out as such. And until I/we devise a better system than tallying, I’m going to borrow Amy’s tool for measuring representation and count (cis) white men/everyone else. Wyna’s puzzle, which prominently features [Author and journalist who wrote “The Case for Reparations” (2014)] TA-NEHISI COATES, passes this “test” with flying colors. Full count below.

Thank you to Kam, Amy, Natan, and everyone else engaged in this conversation about how we can do better as a community of puzzle lovers, and how I can do better as a blogger. Conversations around the marginalization of some identities can be challenging, and I deeply appreciate this community’s willingness to continue to engage. Please don’t hesitate to reach out to me (on twitter, probably) if you want to discuss this further.

As for Wyna’s puzzle, I have literally nothing bad to say for it. This is such an auspicious, fabulous start to Wyna’s New Yorker career! Can’t wait to see more from my crossword soulbuddy. All the stars from me!

A good puzzle for a holiday weekend when many of us will be sitting around more than usual. Each theme answer has circles. 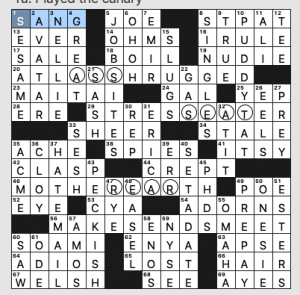 And the revealer: 56a [Is able to pay the bills, or a clue to this puzzle’s theme] is MAKE ENDS MEET. Each of the circled words is another word for a person’s back end, formed at the meeting of two other words. Clever and well-executed, as we’ve come to expect from the Inkubator team.

What I didn’t know before I did this puzzle: see above re: Brigid of Kildare. I also did not know that Sigourney Weaver and Zoe Saldana appeared in AVATAR (never seen it – I’m not a big fan of fictionalized colonial/great white savior narratives). And I’ve never heard of a WELSH terrier. Apparently they look kind of like Airedales. 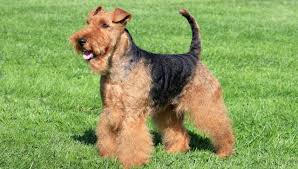 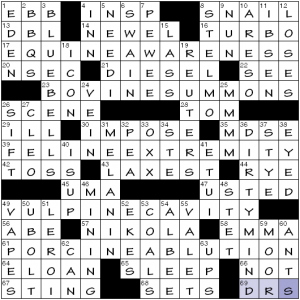 To elaborate, these are all mammals, and most of the latinate adjectives correlate to subfamilies in taxonomy.

Foxhole and hogwash are generally compound words, but it’s understandable that they’ve been separated for consistency in cluing. The question marks ease this modification.

7d [Small bird with a small-sounding name] PEWEE. The name is imitative of its call, and it looks as if the bird’s smallness inspired the use of the adjective in that latter sense. So, full circle!